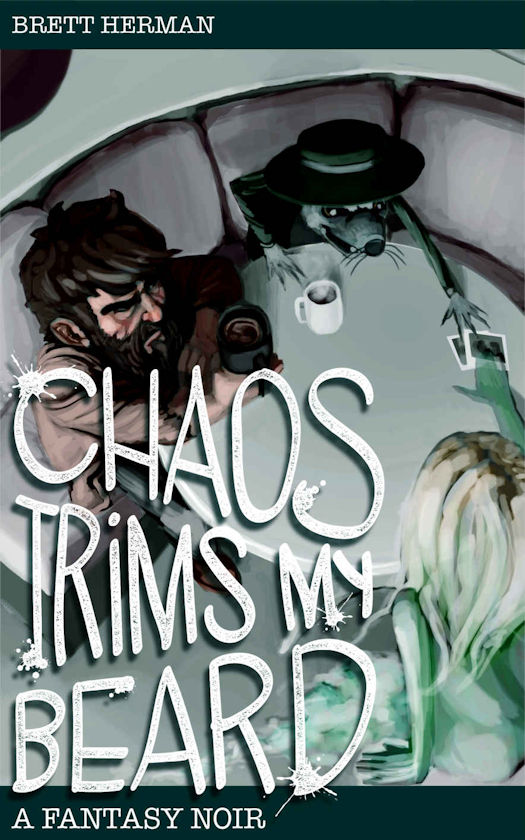 Edwayn Sattler is a half-dwarf with a beard and a dead end job. One night when serving drinks to the city's rich and famous, a fiery playboy loses control of his magic and goes on a burning rampage. After some ill-advised heroics aided by the magic that lives in Edwayn's beard, he finds himself unemployed and socially exiled. With no other job or friends to fall back to, he signs on with an inscrutable ratman sporting a badge and a fetching hat, and together they dive beard and whiskers first into a magical murder conspiracy that threatens to consume the city.

Armed with sub-par wits, a dry sense of humor, and a handful of magical tricks, Edwayn encounters conflagrating cops, smooth-talking trolls, shadowy corporate enforcers, and an air-headed vixen with a fatalistic streak. When his easy-going life spirals into a thrilling, darkly hilarious tale of intrigue and deception, Edwayn will find out just how close this newfound chaos will trim his beard.

For Edwayn it's just another night in his crappy low paid job. As a half breed - half dwarf, half human - his career options are limited. Edwayn lives in a society where half breeds are the bottom of the social pile while the Fae and mages are the elite. Edwayn can hardly wait for his shift to finish. Collecting glasses at a wealthy fae's party is just a way to pay the bills but when one of the guests turns into a living torch Edwayn steps in to try to save the day. What he doesn't realise is that this act heroism means that he is on someone's hit list but he doesn't know whose....all he knows is that he has to lay low. It's not too long before he gets approached by dapper ratman, a rat with a badge no less, who offers him the opportunity to discover what is going on. With the help of his luxurious beard Edwayn, the ratman and a not so friendly ghost set themselves up against the establishment to try to uncover what is going on and to stop anyone else from dying. There is only one thing between Edwayn and the chaos around him....his big luxurious beard....will it be enough? Read it and find out for yourself.

I read Chaos Trims My Beard as one of the finalists for the Self-Published Fantasy Blog-Off 2017 but had I come across it myself I would have wanted to read it. The description reminded me a tiny bit of Tee Morris' Billibub Baddings series which I loved, although the story itself was very different. Edwayn was an approachable character and, bad hygiene aside, he was almost likeable. Herman creates a world for Edwayn that seemed almost as much science fiction as it was fantasy. Poor Edwayn really gets put through the wringer and this is a story with a lot of action. I have to say almost too much action. Oddly, despite all of the action, the story still drags in the middle for several chapters. I was quite engrossed at the start, liked Edwayn, and liked the start of the mystery and who wouldn't like a rat wearing a fedora with a jaunty feather? However, I got the impression that Herman wanted to make the story longer than it should have been so added in more chases, fight scenes and near misses than were needed to fulfill the plot. I have to admit I was skimming a bit in the middle but by the final few chapters Herman had created an excellent and exciting ending to the story.

While I found the pace to be a bit off Herman's ability to make interesting characters is spot on. Edwayn was well developed, as were his relationships with a few of the secondary characters. The thing that I found the most interesting about this book was Edwayn's beard. Herman describes the beard in such a way that it could almost be considered a character in its own right. I thought this was quite unique.

Note: We've been informed that Chaos Trims My Beard has been edited so those of you purchasing now will receive a more polished copy than what was provided for the SPFBO.
Posted by Melanie at 7:00 AM