“I chronicled the hardest ten years of my life through Heath Huston and his drunken plight to save eternity and couldn't be more excited to share our love letter to EC Comics with a new audience,” said Remender. “The series is drenched in love from Tony Moore, Jerome Opeña and some of the best artists in the world.”

FEAR AGENT first made waves when Remender famously described it, in an interview with Comic Book Resources, as their response to a sci-fi genre that'd “lost its stones.” Heralded as an addictive homage to the popular sci-fi adventure of the ’50s, FEAR AGENT was the series that catapulted Remender’s reputation for action-packed sci-fi with heartstring-tugging character building. It laid the groundwork for such hits as, BLACK SCIENCE co-created with artist Matteo Scalera, LOW co-created with artist Greg Tocchini, and his re-teaming and co-creation with Opeña on SEVEN TO ETERNITY.

Moore added: “Rick and Jerome are the collaborators of a lifetime, and we all poured our blood, sweat, and tears into these pages, sometimes literally. This series was a hard-fought labor of love for the genre and the pantheon of mid-century comicbook titans who continue to inspire us the most, and I personally could not be more proud of it."

The FEAR AGENT adventure unfolds when down-and-out alien exterminator Heath Huston stumbles upon an extraterrestrial plot to commit genocide against the human species, he must put down the bottle and resume his role as a peacekeeper...the last Fear Agent.

Opeña added: "Working on Fear Agent was some of the most fun I've ever had in comics and it's great to see the book get the recognition it deserves all these years later. I'm eternally grateful to Rick and Tony for inviting me along to collaborate with them and it's an honor to have my name associated with the book in any way."

"All involved supply enjoyable, thrilling, and sometimes beautiful...tones and styles of
action, horror, and sci-fi in homage to the great EC comics of the 1950s." —Booklist

"Many books that rely on action don't necessarily do it well. Fear Agent doesn't have
that problem. Tony Moore consistently delivers incredible visuals and designs while
Rick Remender has an excellent sense of pacing. This book feels like a great Indiana
Jones tale set in space (substitute Nazis for aliens)." —IGN

“There are really not many books that capture the adventure, humor, and seediness of
our classic Sci-Fi notions of space as Fear Agent does. This is The Shootist meets
Mars Attacks! with just the right mix of Barfly flown in for the art house benefit… an
extremely high-quality release.” —Impose Magazine

“One of our favorite series. A fantastic fun book, that will emotionally hit you… there is
nothing safe with this comic, Remender completely knocks the ground from under the
characters in every single issue… it’s excellent, we highly, highly recommend it.”
—Pulp Secret

“We love us some Fear Agent. It's rare that you're able to just throw away the rational
part of your brain and enjoy some good escapist entertainment, especially when you're
talking about science fiction.” —UGO

“Rick Remender's Fear Agent is a rare treat in comics these days. Fear Agent is not
just great science fiction in a form of media that has seemed to have lost touch with the
concept of it, but it's also just fun comics.” —Ain’t it Cool News

“Some SF stories get weighed down by the very details writers hope will bring them life.
But Fear Agent isn’t one of them. It really will appeal to—not just SF fans—but to
everyone who enjoys their adventures straight up.” —Paperback Reader

“Writer Rick Remender's story manhandles readers' imaginations with a multi-tiered,
well-constructed story that is not just about the violence of an action hero but manages
to squeeze in some of his humanity.” —The Washington Times

“Good sci-fi stories are really lacking in comics today and Fear Agent is one of the best.
Grade: A.” —Comic World News 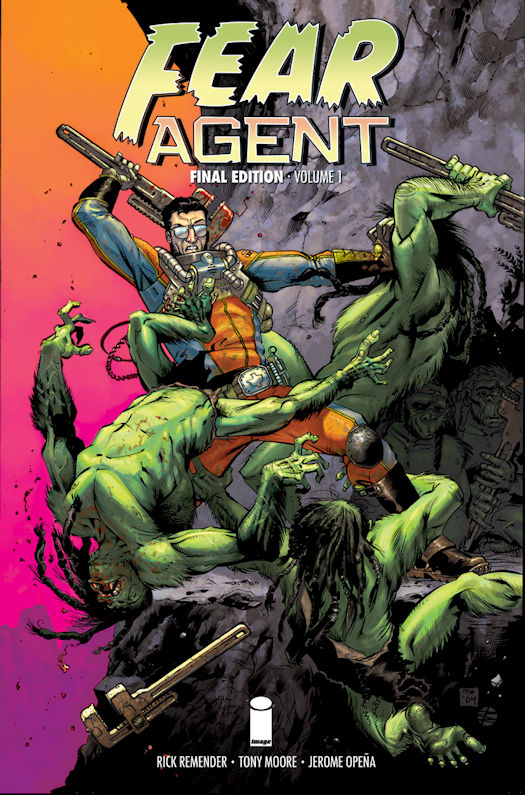 ABOUT IMAGE COMICS
Image Comics is a comic book and graphic novel publisher founded in 1992 by a collective of bestselling artists. Image has since gone on to become one of the largest comics publishers in the United States. Image currently has five partners: Robert Kirkman, Erik Larsen, Todd McFarlane, Marc Silvestri, and Jim Valentino. It consists of five major houses: Todd McFarlane Productions, Top Cow Productions, Shadowline Comics, Skybound Entertainment, and Image Central. Image publishes comics and graphic novels in nearly every genre, sub-genre, and style imaginable. It offers science fiction, fantasy, romance, horror, crime fiction, historical fiction, humor and more by the finest artists and writers working in the medium today. For more information, visit www.imagecomics.com.
Posted by Qwill at 8:24 AM