Interview with Tyrell Johnson, author of The Wolves of Winter


Please welcome Tyrell Johnson to The Qwillery as part of the of the 2018 Debut Author Challenge Interviews. The Wolves of Winter was published on January 2nd by Scribner. 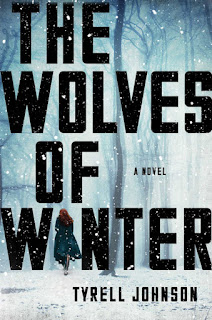 Tyrell:  When I was in grade school, I wrote a five-page story about a farmer who loses his cow. In a twist no one saw coming, he finds the lost cow hiding at the top of a nearby tree.

Tyrell:  I’m probably something of a hybrid. I start with an idea, setting, or character; I’ll have vague notions of plot; and then I’ll move forward one sentence at a time. Every once in a while, I’ll write a rough outline of where I think things are headed, but it’s very vague, and I often don’t stick to it.

Tyrell:  Right now it’s probably staying focused. I have a lot of things going on at the moment that keep drawing my attention away from the page and my time to be creative.

Tyrell:  Everything from books I’ve read, to movies I’ve watched, to family and friends. These things blend together with my experience and personality and preferences and somehow inform my writing. That’s a very vague answer! Sorry.

TQ:  Describe The Wolves of Winter in 140 characters or less.

Tyrell:  A young woman surviving in a post-apocalyptic Yukon meets a stranger with secrets of the past that will change her life forever.

TQ:  Tell us something about The Wolves of Winter that is not found in the book description.

Tyrell:  There are 27 instances of the F word in the novel.

TQ:  What inspired you to write The Wolves of Winter? What appeals to you about writing Post-Apocalyptic fiction?

Tyrell:  I knew I wanted to write a post-apocalyptic novel because I like the genre. I like the questions it poses about humanity and about what life would be like if we didn’t have the luxuries we have today. I was also a new father at the time and wanted to use that experience and those emotions in the novel, which is why the father/daughter relationship is so prevalent. And, finally, before any of this, I had been writing fiction primarily with male protagonists. However, many of my readers’ favorite characters were the females in my stories. So my wife very kindly urged me to go write a book with a female as the protagonist. I gave it a try.

TQ:  What sort of research did you do for The Wolves of Winter?

Tyrell:  I did research on the flora and fauna of the Yukon and looked at a lot of maps. I also watched many YouTube videos on things like how to build an igloo and how to gut a deer. I didn’t want to just read about these things, I wanted to watch them being done so I could more accurately describe them. I don’t recommend, however, eating a turkey sandwich while watching a deer being field dressed.

TQ:  Please tell us about the cover for The Wolves of Winter?

Tyrell:  The cover was done in part by Pete Garceau and in part by HarperCollins Germany. We had the basic layout and background, but knew it still needed something to give it that edge. Then we saw the German cover of the novel, in which they use the figure of a woman in the place of the “I” in “Winter.” We thought it was a fantastic idea, inserted the woman into our own backdrop, and the cover was born. And no, it doesn’t depict any specific scene from the novel.

TQ:  In The Wolves of Winter who was the easiest character to write and why? The hardest and why?

Tyrell:  I suppose I might say my main character was both the easiest and the hardest. I’ve spent the most time in her head, so really, I feel like I know her best and could write her voice the easiest. However, she was also the hardest because I’m a man writing from a woman’s perspective, and so there were a lot of things that I was very consciously trying to get right.

Tyrell:  I didn’t intend to focus on any one social issue, however, I think there are issues that are sort of innate in the post-apocalyptic genre. It forces us to take a hard look at our ruling powers, at the environment, and at what we put value on in our lives. This is one of the reasons I like the genre: hopefully there’s a fascinating story with relatable characters, but there’s also that subtext (dare I call it a warning?) of society falling apart.

TQ:  Which question about The Wolves of Winter do you wish someone would ask? Ask it and answer it!

Tyrell:  Was the dog in the novel based off your own dog?

Yes! He’s the only character that is actually based off a character in real life. My dog is just as energetic, just as curious, just as happy, just as quasi-annoying as the dog, Wolf, in the book.

TQ:  Give us one or two of your favorite non-spoilery quotes from The Wolves of Winter.

Tyrell:  I’ve always been a little partial to my first sentence: “The trap was empty and the snow was bloody, which meant one of three things.” I hope that this immediately makes readers want to read, at the very least, the next sentence.

Tyrell:  I’m working on a book two, though I can’t make any promises that it’ll see the light of day.

Tyrell:  Thanks so much for having me! 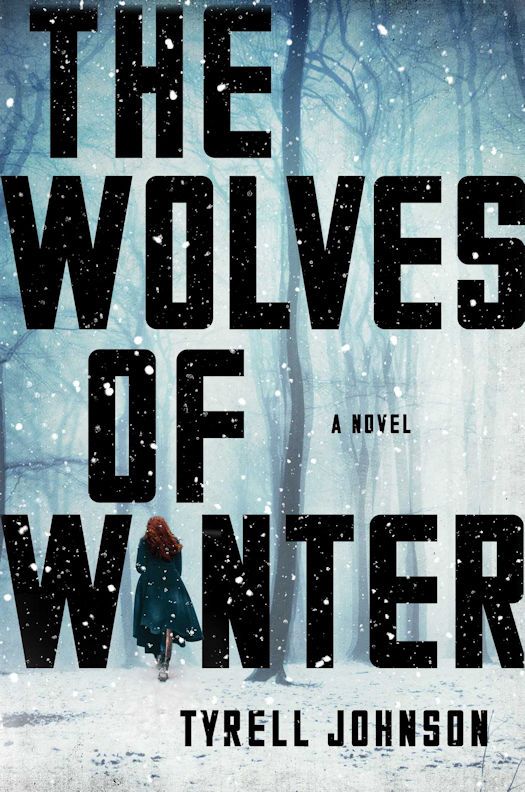 A captivating tale of humanity pushed beyond its breaking point, of family and bonds of love forged when everything is lost, and of a heroic young woman who crosses a frozen landscape to find her destiny. This debut novel is written in a post-apocalyptic tradition that spans The Hunger Games and Station Eleven but blazes its own distinctive path.

Forget the old days. Forget summer. Forget warmth. Forget anything that doesn’t help you survive in the endless white wilderness beyond the edges of a fallen world.

Lynn McBride has learned much since society collapsed in the face of nuclear war and the relentless spread of disease. As the memories of her old life continue to haunt, she’s forced to forge ahead in the snow-drifted Canadian Yukon, learning how to hunt and trap and slaughter.

Shadows of the world before have found her tiny community—most prominently in the enigmatic figure of Jax, who brings with him dark secrets of the past and sets in motion a chain of events that will call Lynn to a role she never imagined.

Simultaneously a heartbreakingly sympathetic portrait of a young woman searching for the answer to who she is meant to be and a frightening vision of a merciless new world in which desperation rules, The Wolves of Winter is enveloping, propulsive, and poignant.

Tyrell Johnson is a twenty-nine-year-old writer and editor who grew up in Bellingham, Washington. He received his MFA from the University of California, Riverside, where he studied fiction and poetry. An avid outdoorsman, he currently lives in Kelowna, British Columbia, northeast of Vancouver with his wife, two kids, and a Siberian husky. The Wolves of Winter is his first novel.