Skyward is a great new series with a great hook and jaw-dropping artwork by Lee Garbett. Highly recommended!" —Jeff Lemire
PORTLAND, OR, 01/23/2018 — Writer Joe Henderson (showrunner of Fox’s Lucifer) and artist Lee Garbett (Lucifer, Loki: Agent of Asgard) team up for an all-new gravity-defying series in SKYWARD. The new series is set to launch this April.

“Skyward is my all of my favorite things mashed together,” said Henderson. “It’s a coming-of-age story filled with action and humor, devastation and hope. It explores a world turned upside down, where anyone can leap tall buildings with a single bound… but if you jump too high, you die. And getting to see Lee Garbett bring it to glorious life is a dream come true.”

In SKYWARD, gravity on Earth suddenly becomes a fraction of what it is now. Twenty years later, humanity has adapted to its new, low-gravity reality. For one Willa Fowler—a woman born just after the fateful “G-day”—life after gravity it pretty awesome. Until she accidentally stumbles into a dangerous plan to bring gravity back. A plan that could get her killed…

Garbett added: "When I first read the pitch for Skyward it felt like fate had had a hand in putting it my way. Like it had been written for me and designed to push all my buttons. Joe Henderson's script—as well as that killer high-concept—was so rich, his characters so warm and full of life, that I was hooked and holding on to this baby with both hands like it was chained to the ground on G-Day. I hope the readers will have the same experience.”

SKYWARD is an adventure-filled exploration of our world turned upside down and a young woman’s journey to find her place in it.

SKYWARD #1 (Diamond Code FEB180510) and will be available on Wednesday, April 18th. The final order cutoff for retailers is Monday, March 26th. 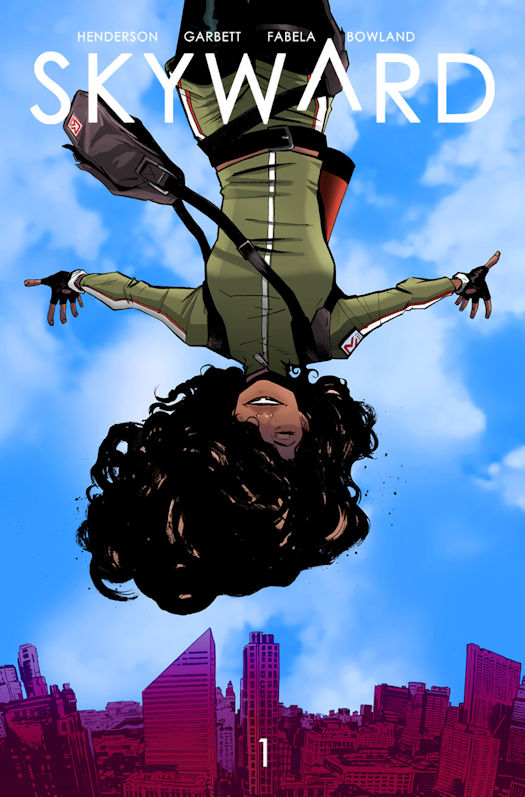 ABOUT IMAGE COMICS
Image Comics is a comic book and graphic novel publisher founded in 1992 by a collective of bestselling artists. Image has since gone on to become one of the largest comics publishers in the United States. Image currently has five partners: Robert Kirkman, Erik Larsen, Todd McFarlane, Marc Silvestri, and Jim Valentino. It consists of five major houses: Todd McFarlane Productions, Top Cow Productions, Shadowline Comics, Skybound Entertainment, and Image Central. Image publishes comics and graphic novels in nearly every genre, sub-genre, and style imaginable. It offers science fiction, fantasy, romance, horror, crime fiction, historical fiction, humor and more by the finest artists and writers working in the medium today. For more information, visit www.imagecomics.com.
Posted by Qwill at 8:25 AM