"A beautiful and haunting look at a very troubled world." —IGN
PORTLAND, OR, 01/25/2018 — Bestselling writer Aleš Kot (ZERO, GENERATION GONE), artist Danijel Žeželj (STARVE), and Eisner-winning colorist Jordie Bellaire (REDLANDS, PRETTY DEADLY) tap into current political angst with their all-new maxi-series, DAYS OF HATE. In order to keep up with growing readership for the gritty American thriller tragedy DAYS OF HATE #1 is being rushed back to print.

DAYS OF HATE is set in The United States of America in 2022. The loss that ripped two of its main protagonists apart drove one into the arms of the police state and the other towards a guerrilla war against the white supremacy. Now they meet again, on the opposing sides—and all hell has broken loose.

Kot makes waves as an outspoken politically-charged voice in the comics industry and has cultivated a devoted readership and following. Deciding to create a "spiritual sequel" to one of their biggest hits, ZERO, Kot has channeled their sensibility into the intense narrative behind DAYS OF HATE.

Women Write About Comics called it, “painfully prescient… a striking book,” while Newsarama said of DAYS OF HATE: "...both demands and is worth your attention."

Žeželj’s edgy, modern art-style brings the DAYS OF HATE realities to life before readers eyes and highlights the unsettling tones of this dystopian series. 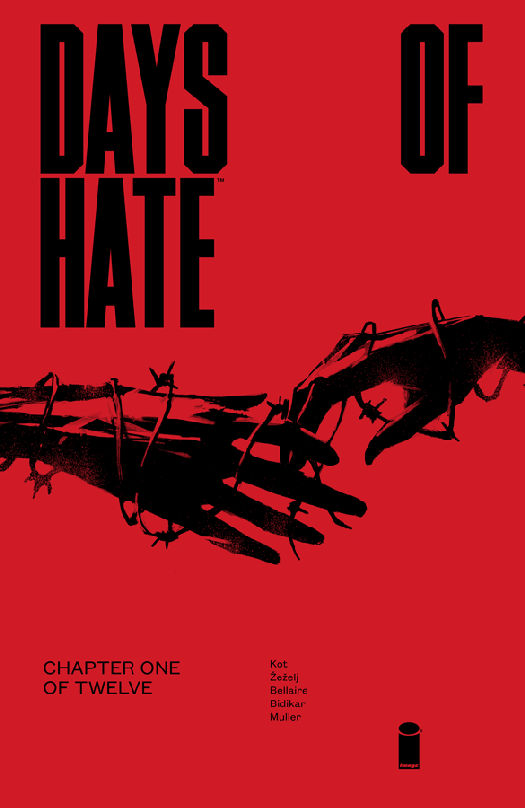 ABOUT IMAGE COMICS
Image Comics is a comic book and graphic novel publisher founded in 1992 by a collective of bestselling artists. Image has since gone on to become one of the largest comics publishers in the United States. Image currently has five partners: Robert Kirkman, Erik Larsen, Todd McFarlane, Marc Silvestri, and Jim Valentino. It consists of five major houses: Todd McFarlane Productions, Top Cow Productions, Shadowline Comics, Skybound Entertainment, and Image Central. Image publishes comics and graphic novels in nearly every genre, sub-genre, and style imaginable. It offers science fiction, fantasy, romance, horror, crime fiction, historical fiction, humor and more by the finest artists and writers working in the medium today. For more information, visit www.imagecomics.com.
Posted by Qwill at 7:12 AM