PORTLAND, OR, 01/11/2018 — Superstar creators Gail Simone (Red Sonja, Secret Six) and Cat Staggs (Wonder Woman ‘77, Smallville Season 11) will release CROSSWIND, VOL. 1 from Image Comics this February. CROSSWIND is in development for a television series, with Simone slated to write as well as executively produce and Staggs to serve as a consulting producer.

A slick and ruthless Chicago hitman. A smart but downtrodden Seattle housewife. When an inexplicable event strikes these two random strangers, their bodies, souls, and lives are switched—to potentially deadly effect.

“CROSSWIND is a dream project for co-creator/artist Cat Staggs and me: a crime fantasy with guts and heart and a downright mean streak at times,” said Simone. “It’s a venomous confection, two people whose lives are switched and they have no idea why. We loved every minute of making this book and hope you’ll love it, too, bodily injury and all.”

“If you ever wondered what it was like to walk in someone else's shoes, CROSSWIND might make you think twice about that,” said Staggs. “Gail and I have worked to create a grounded and sometimes brutal fantasy that you won't be able to put down. Buckle up and enjoy the ride.”

CROSSWIND, VOL. 1 will be available in bookstores Tuesday, March 5th. It can be preordered via Amazon, Barnes & Noble, IndieBound, and Indigo.

Note: Also will be available at Book Depository and Books-A-Million.


“Freaky Friday—yes! But dark and twisted and such great art and page composition.
And glints of humour. This is great, kinetic, mind-warping work. Art reminded me of
Chaykin’s The Shadow meets Bill Sienkiewicz. I love this.” —Ian Rankin (Inspector
Rebus novels)


“CROSSWIND is a fantastic story with very real stakes and consequences concerning
identity in both physical and psychological ways.” —Comics Verse


“CROSSWIND will sneak up on you from behind and knock you sideways. Gail Simone
is at her absolute sharpest, and Cat Staggs’s art is daring and sexy. Freakin’
impressive is what it is…!” —Cully Hamner (RED, The Question)


“Cat Staggs's art will grab you by the throat and kick you in the teeth. This is one creepy
ride.” —Joe Harris (ROCKSTARS, X-Files)


“Simone and Staggs’ work together rivals that of even the best noir teams (Brubaker
and Phillips better watch their backs).” —Monkeys Fighting Robots


"By the end of issue #1, I was absolutely hooked. The only thing more riveting than
CROSSWIND’s two protagonists are these two incredible creators joining together at
the peak of their powers." —Tom Taylor (All-New Wolverine, Injustice, The Deep)


“Beautifully illustrated and with a fresh take on a fairly worn-out trope, CROSSWIND is
a fantastic new series from two creators working in perfect synergy.” —Big Comic
Page 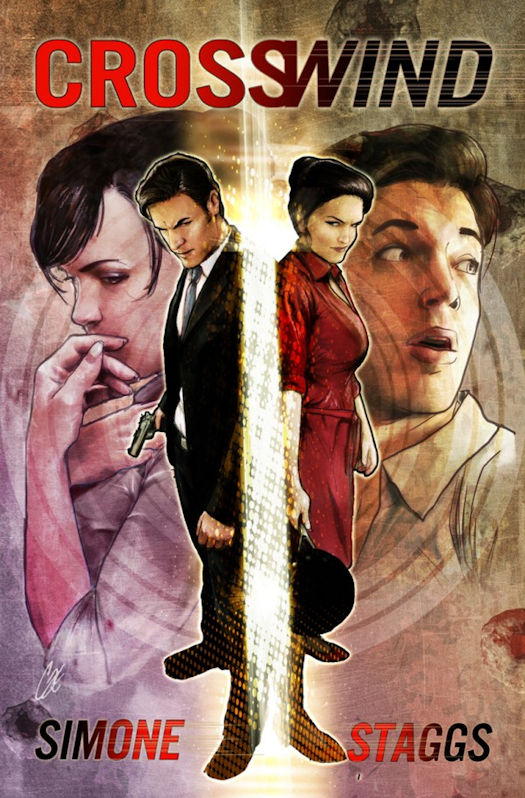 ABOUT IMAGE COMICS
Image Comics is a comic book and graphic novel publisher founded in 1992 by a collective of bestselling artists. Image has since gone on to become one of the largest comics publishers in the United States. Image currently has five partners: Robert Kirkman, Erik Larsen, Todd McFarlane, Marc Silvestri, and Jim Valentino. It consists of five major houses: Todd McFarlane Productions, Top Cow Productions, Shadowline Comics, Skybound Entertainment, and Image Central. Image publishes comics and graphic novels in nearly every genre, sub-genre, and style imaginable. It offers science fiction, fantasy, romance, horror, crime fiction, historical fiction, humor and more by the finest artists and writers working in the medium today. For more information, visit www.imagecomics.com.
Posted by Qwill at 7:51 AM