Please welcome Mitchell W. Maknis to The Qwillery with reviews of two games that are great for Halloween (or anytime) if you like to be scared!

It’s rare to find a horror game that actually invokes fear steadily throughout the gameplay, but The Evil Within by developer Tango Gameworks and publisher Bethesda Softworks delivers a genuinely scary experience. Shinji Mikami, the Director of Resident Evil, unleashes his psychological survival horror game for the PlayStation 4, PlayStation 3, Xbox One, Xbox 360, and Microsoft Windows platforms.

The player assumes the role of police detective Sebastian Castellanos, voiced by Anson Mount (Hell on Wheels) in a third person perspective. Mount’s deep, gritty voice, coupled with a satisfying script really propels the action and fuels the experience. In the game’s opening, Sebastian and his partners Joseph Oda, (Yuri Lowenthal) and Juli Kidman (Jennifer Carpenter) are called in to investigate a grotesque murder scene. The player is immediately immersed in Mikami’s macabre vision during the first moments in Beacon Mental Hospital. 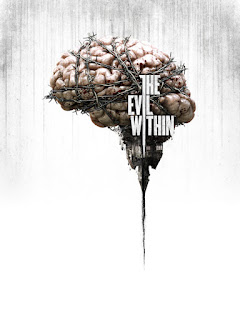 Upon entering the institution, they find themselves surrounded by a sea of corpses who were once the hospital’s occupants. Sebastian gets separated from his team and discovers he is lost in the bowels of the hospital, with only a lantern to guide his path, in this gruesome supernatural world. Sebastian must survive the swarms of various demonic creatures that lead up to difficult boss battles. I enjoyed the fact that these battles are as scary and creepy as they are intense.

The primary antagonist, Ruvik, voiced by Jackie Earle Haley (Little Children, Dark Shadows, A Nightmare on Elm Street) has a presence that is delightfully dark, cruel, and demeaning. I really enjoyed Haley's performance as the psychotic madman because I feel it is executed to perfection and I liked the way it drives the story into a deeper and darker plotline.

This game provides a unique experience in that the player must use skill to sneak rather than shoot through its fearsome enemies. Throughout the game the player may find firearms, ranging from pistols and shotguns to a multipurpose agony crossbow. Beware, even with these tools some creatures won’t stay dead and will resurrect themselves for a chance to tear the player apart. The player can use matches to burn the corpses, but should use them with caution, because like ammunition, matches are scarce. Also, while hunting for supplies, the player should look for medical kits and green gel which can be used to purchase upgrades for weapons, health, and other personal attributes used to customize gameplay.

The campaign is compiled in fifteen chapters, all with spectacular visuals and gruesome environments with new threats introduced at nearly every section. The cut scenes are masterfully implemented and are just as bone chilling as the actual game. Adding to the intensity of the story arc is Sebastian's fight against his own demons in an attempt to suppress the evil within him or be eternally lost in the madhouse of horror.

The Evil Within is rated M for blood and gore, intense violence, and strong language. This game has a highly entertaining combination of fear and fun, laced with the perfect amount of depravity. The Evil Within bombards the player with nerve-wracking and suspenseful gameplay that makes it a superior horror game.

With The Evil Within, Shinji Mikami director of the original Resident Evil, re-established himself as a master of the survival horror game genre. Mikami’s executive producer role in The Evil Within 2 may be smaller, but visual effects designer and director of The Evil Within’s downloadable content: The Assignment and The Consequence, John Johanas, takes the director’s chair in a sequel that sets itself apart from the first game as a new and terrifying horror experience. The latest installment in the franchise offers a deeper look into series protagonist Sebastian Castellanos, revealing aspects about his character that were only known through The Evil Within’s DLC missions. For Sebastian, this is no longer just a story of survival; this is a story of redemption. Three years after the incident at Beacon Mental Hospital, Sebastian is left with more questions than answers as he searches for the truth about the elusive Mobius. He is reunited with former associate Juli Kidman and discovers the truth about his daughter who he thought to be dead but is now the core of the system that still tortures him. He is given the opportunity to see his daughter again and save her life, but only by returning to the place that has plagued his mind with terror. This is a story of how a broken man will go to severe lengths to save what was taken from him.

The game has a third person point of view which gives the player more of a sense of the uncomfortable and ever-changing world of STEM. For fans of the original game, it may be unsettling to hear different actors portray already defined characters. While the new actors do a good job, it was initially difficult for me to immerse myself back in the world that had stuck with me since the original’s release in 2014. As the story progresses, the world draws the player back and the voices become an afterthought; the player’s focus becomes their need for survival.

From the first moment, as you start a new game, The Evil Within 2 takes a cinematic approach. In some sections this aspect worked wonders, especially during the introduction as the player is re-submerged into the world of STEM, but in other sections I feel it was misplaced, taking away opportunities to be scared.

This game, while retaining many of the same mechanics from the previous game, sets itself apart by having more variety, as the first game had a linear path to follow. The sequel, while not being open world, still gives the player a vast environment to explore in each chapter. It’s different from the first and I like it, but having an almost open world isn’t as scary as traveling one path where you have no options. Running from enemies to reach your safe haven is still on the edge of your seat nerve-wracking. The safe house takes the form of Sebastian’s office in the Krimson City Police Department. It’s more vibrant and not as eerie as the original safe haven, but still provides a sense of ease. As a fan of the first game, seeing references of characters and objects provided welcome nostalgia, and also reminded me that the originals horrors from the first game are still a lingering subconscious fear.

Once again, the player has the choice to use stealth and sneak past new and terrifying enemies, or to utilize the variety of weapons at their disposal A word of caution, use your ammunition sparingly as bullets are limited and the hordes of enemies often give the feeling they will overwhelm you. If you prefer to shoot your way through each chapter be warned: there are cleverly implemented sections where stealth is vital for completion.

The Evil Within 2 not only proves to be one of the best game sequels that isn’t just a carbon copy of the first game, but also establishes itself as its own definitive horror experience. While it may lack the grotesque eeriness from its predecessor, the story has twists and turns much like the manipulating environment of STEM that players are thrust into. The gameplay provides the player more to do, including engrossing side missions filled with uncontrollable events to navigate. The Evil Within 2 provides players with a thought-provoking and chilling experience with an emotional climax that will appeal to fans of both the franchise and horror games. The Evil Within 2: you won’t stop playing until the nightmare ends.

The Evil Within 2 was released on October 13, 2017 and is available for PlayStation 4, Xbox One, and Microsoft Windows platforms and is rated M for blood and gore, intense violence, partial nudity, and strong language.