Interview with Jeannette Ng, author of Under the Pendulum Sun


Please welcome Jeannette Ng to The Qwillery as part of the of the 2017 Debut Author Challenge Interviews. Under the Pendulum Sun was published on October 3rd by Angry Robot. 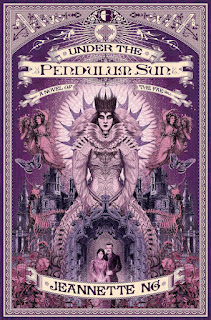 Jeannette:  I've been writing for as long as I remember writing and before that I was telling stories. First year of primary school, I would drag other children into the PE supplies closet and make them listen to me.

I'm probably a discovery writer (a pantser) at heart, but that way lies plots cul-de-sacs and unfinished books. And madness. Which is to say I need plotting and structure and direction to hold me together. I've never finished a novel that I didn't know the ending to, but the route towards it can change considerably as it gets written.

Jeannette:  My own anxieties can be very loud at times. Facing my writing can mean I need to face down my own fears and they can get very, very loud. It drowns out the voice inside me that is trying to tell a story and then I'm trying to make it all go quiet with distractions. It's all an incredibly unhelpful and typical cycle.

Erm, a more author-ly answer is time skips and information management. I find minutae interesting, so knowing how much to show and how much to summarise is something I find awkward. SHOW DON'T TELL has been drummed into my mind from my very early days and it's very counterintuitive then to me that I must now just skip all ten days of "boring" travel.

Jeannette:  Under the Pendulum Sun's most direct literary influences is almost certainly the Brontës, especially Charlotte's Jane Eyre. I borrow heavily from their structures and motifs. The rest of the gothic canon have made their mark, from Ann Radcliffe and Regina Maria Roche to V C Andrews.

In terms of writing half-real magic realist alt-histories, I'm heavily influenced by Jorge Luis Borges. I was so enamoured of him that I had his poems plastered all over my boarding school bedroom. He wrote reviews of nonexistent books and passed off original work as "translations". I simply adore that sort of literary forgery and that is a huge part of Under the Pendulum Sun.

TQ:  Describe Under the Pendulum Sun in 140 characters or less.

TQ:  Tell us something about Under the Pendulum Sun that is not found in the book description.

Jeannette:  All the chapters start with fragments of literary forgery, which I really enjoyed writing. They are quotations from texts the characters within the book are reading. Partly to cut down on quotations within the text itself. A lot of incidental world building happens there, as well as foreshadowing of things to come. It's likely an affectation that will follow me into future projects.

TQ:  What inspired you to write Under the Pendulum Sun? What appeals to you about writing Fantasy?

Jeannette:  I found a Victorian missionary text in the university library one day and it all just went from there.

Magic is kinda just cool, but I love how that inherent coolness of magic (and dragons, etc) can be used to hook a reader into being interested in things they would otherwise overlook. I can use that interest to shine a light on things I find interesting, like biblical apocrycha, textile guild politics or medieval bookmaking methods. I'm uncomfortable with direct allegories but magic can also be used to amplify and intensify.

TQ:  What sort of research did you do for Under the Pendulum Sun?

Jeannette:  I already had a grounding in the Victorians from my degree, but I read a lot of Victorian texts (all out of copyright) on google books and assorted other online libraries of scanned books. I visited various museums up and down the country, but that's also just a normal weekend. I remember the goblin market idea came to me when in a room done up as a Victorian child's room. I also went to Birdforth, the village where Laon and Cathy Helstone grew up and paid a visit to its little Norman church.

TQ:  Please tell us about the cover for Under the Pendulum Sun.

Jeannette:  John Coulthart did the cover and he's just amazing. He and I both wrote about the cover over at Fantasy Faction during the reveal and he offers a lot of cool insight into his design choices.

The cover depicts Mab, the Pale Queen of the Fae, as this terrifying collage of moths and other insects. It is she who terrorises the siblings who we see imprisoned in the elaborate gothic arches. The castle Gethsemane in which most of the book takes place can be seen ominously in the background.

TQ:  In Under the Pendulum Sun who was the easiest character to write and why? The hardest and why?

Jeannette:  Mab was probably the most fun to write, since she's such a marvelously malevolent presence for so much of the book. I am perhaps too fond of describing her and every line of hers drips with double meaning.

Laon was awkward in various ways, since gothic heroes aren't always very likeable people and he's very much cut from that same tortured cloth. I am very fond of him as a character and he was himself the viewpoint protagonist in an earlier draft but that lacked bite. It drew the reader into his depressive narcissism, but of course now we see him through the eyes of his sister and he's not at all forthcoming at first about his reasons. There's this delicate balance of mystery and explaining that I'm still not sure I've gotten quite right.

Jeannette:  I've included social issues in the sense that I consider them an inescapable part of the fabric of the world and the lives of the characters. There's quite a raw conversation in which one character confronts another about how they seem oblivious to their difference in privilege, for example. And it is inescapable that a book dealing with Victorian missionaries would touch on ideas of British imperialism and colonialism, after all. But I wouldn't call Under the Pendulum Sun an "issue" book. It all informs the action rather than is the action.

TQ:  Give us one or two of your favorite non-spoilery quotes from Under the Pendulum Sun.

Jeannette:  For maximum non-spoilery, here is a description of the titular Pendulum Sun:

If you would imagine a bright lantern hanging at the end of a long cord. Then imagine that it swings as a pendulum over a surface, bringing each part in turn into its light.


That surface is Arcadia and that lantern is their sun. Thus at the edges of the Faelands, the sun reaches the pinnacle of its upswing before falling back the way it came. The equilibrium position of the pendulum sun is near the centre of the Faelands, directly above the city of Pivot. There, it is almost never night, as the sun is always close enough to impart at least a hazy twilight of illumination.

I really like this exchange between Cathy and fae she meets:


"Pay him no heed." Kasdaye pulled my hand into hers. "Have you not wanted to speak to me all your life?"
"H-have I?"
"You're human. And humanity loves us." She was stroking my hand as though it were a lapdog. "So desperate are you to speak to us that you see us everywhere. You look across across your borders, your walls and instead of your neighbours, you see us. As your ships sail further and countries and continents discover each another, you see not each other. You see us. You want to see us."

Jeannette:  The obvious next thing of mine out next is a short story titled "How the Wishing Tree Gained its Carapace of Plastic" in Not So Stories, which is out next year. It's the first thing of mine published that draws directly on Chinese folklore so I've very excited about that seeing light of day.

I'm working on a number of other novels, but I'm afraid they're all a bit Watch This Space. I'm at that skittish stage where I fear jinxing it all by talking about it.

Jeannette:  Thank you for having me. :) 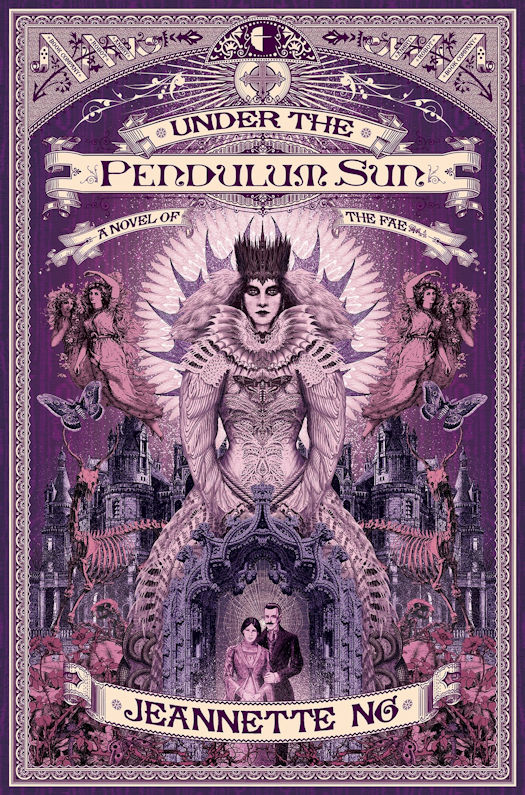 Victorian missionaries travel into the heart of the newly discovered lands of the Fae, in a stunningly different fantasy that mixes Crimson Peak with Jonathan Strange & Mr Norrell.

Catherine Helstone’s brother, Laon, has disappeared in Arcadia, legendary land of the magical fae. Desperate for news of him, she makes the perilous journey, but once there, she finds herself alone and isolated in the sinister house of Gethsemane. At last there comes news: her beloved brother is riding to be reunited with her soon – but the Queen of the Fae and her insane court are hard on his heels.

File Under: Fantasy [ In Arcadia | Seek and Hide | The Queen of Moths | Lands of the Damned ] 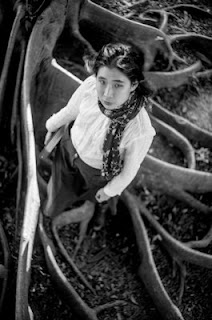 Jeannette Ng is originally from Hong Kong but now lives in Durham, UK. Her MA in Medieval and Renaissance Studies fed into an interest in medieval and missionary theology, which in turn spawned her love for writing gothic fantasy with a theological twist. She runs live roleplay games and is active within the costuming community, running a popular blog.