TNT Launches New Psychological Thriller The Alienist Jan. 22
The Series is a Co-Production Between Paramount Television and Turner's Studio T
Watch an All-New Trailer for the Series Now:

Turner's TNT will take viewers into the darkest corners of New York City during the Gilded Age with the eagerly anticipated series The Alienist based on the Anthony Award-winning international bestseller by Caleb Carr.Set in 1896 amidst a backdrop of vast wealth, extreme poverty and technological innovation, this psychological thriller stars Daniel Brühl (Rush), Luke Evans (The Girl on The Train), Dakota Fanning (American Pastoral) and Brian Geraghty (The Hurt Locker). The Alienist is slated to premiere on Monday, Jan. 22 at 9 p.m. ET/PT across TNT platforms. 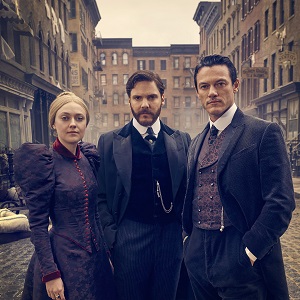 The Alienist also stars Douglas Smith (Miss Sloane) and Matthew Shear (Mistress America) as Marcus and Lucius Isaacson, twin brothers who help unravel the disturbing mystery; Matt Lintz (Pixels) as Stevie, a tough, young boy employed by Dr. Kreizler as a driver and errand boy; Robert Ray Wisdom (The Wire) as Cyrus, Kreizler's valet, a man with a dark past who has been reformed by Kreizler; and Q'orianka Kilcher (The New World) as Mary, Kreizler's mute maid with whom he shares a special unspoken connection.

Founded in 1999 by CEO Steve Golin, Anonymous Content is a leading management and Film, TV and Commercial production company. Anonymous Content manages the careers of many of the world's most renowned and innovative directors, writers, actors and comedians, working closely with them to achieve their goals by both creating and finding opportunities for them, whether in feature films, television, commercials, music videos or brand integrated content. Anonymous Content's clients have been recognized with Academy Awards®, Emmys®, Golden Globes®, Tony Awards®, Pulitzer Prizes® and other prestigious awards. The company's award-winning Film & TV division boasts many commercially successful and critically acclaimed works, including Babel, Winter's Bone, Being John Malkovich, Eternal Sunshine of the Spotless Mind, 50 First Dates, Collateral Beauty, The Revenant and the Best Picture Academy Award-winning Spotlight. The company's TV slate includes True Detective (HBO), The Knick (Cinemax), Mr. Robot (USA Network), Schitt's Creek (POP), 13 Reasons Why (Netflix) and Berlin Station (EPIX), as well as upcoming The Alienist (TNT) and Maniac (Netflix). Through its commercial work, Anonymous Content is also the driving creative force behind countless top brands, including Prada, Nike and Coke. In 2016, Anonymous Content received a substantial minority investment from Emerson Collective, the organization founded and run by Laurene Powell Jobs, to allow the firm to expand its production offerings in socially relevant content aimed at inspiring change.

TNT is basic cable's #1 network in primetime with young adults and is home to one of cable's most popular slates of original series, including Animal Kingdom, Claws, Good Behavior, The Last Ship, Major Crimes, The Librarians, the upcoming The Alienist, One Day She’ll Darken and more. TNT's premium non-fiction series include the upcoming Who Run the World? from Refinery29 and executive producers Sarah Jessica Parker & Morgan Spurlockand Michael Moore Live from the Apocalypse. TNT also presents popular shows such as Arrow, Supernatural, Bones and Castle; primetime specials, such as the Screen Actors Guild Awards® and the iHeartRadio Music Awards; and championship sports coverage, including the NBA and the NCAA Division I Men's Basketball Championship.

Turner, a Time Warner company, is a global entertainment, sports and news company that creates premium content and delivers exceptional experiences to fans whenever and wherever they consume content. These efforts are fueled by data-driven insights and industry-leading technology. Turner owns and operates some of the most valuable brands in the world, including Adult Swim, Bleacher Report, Boomerang, Cartoon Network, CNN, ELEAGUE, FilmStruck, Great Big Story, HLN, iStreamPlanet, Super Deluxe, TBS, Turner Classic Movies (TCM), TNT, truTV, and Turner Sports.
Posted by Qwill at 7:26 AM