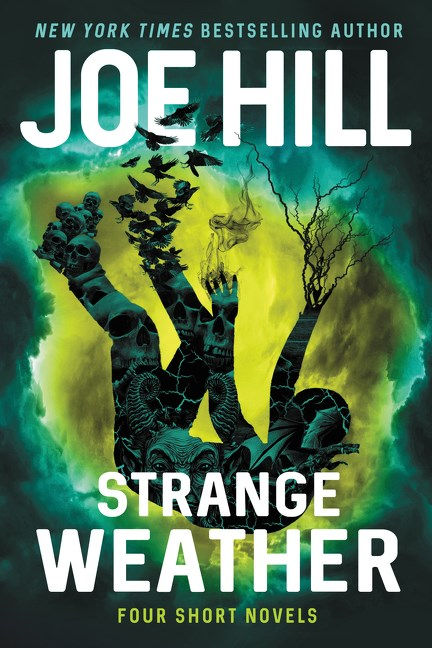 "Snapshot" is the disturbing story of a Silicon Valley adolescent who finds himself threatened by "The Phoenician," a tattooed thug who possesses a Polaroid Instant Camera that erases memories, snap by snap.

A young man takes to the skies to experience his first parachute jump. . . and winds up a castaway on an impossibly solid cloud, a Prospero’s island of roiling vapor that seems animated by a mind of its own in "Aloft."

On a seemingly ordinary day in Boulder, Colorado, the clouds open up in a downpour of nails—splinters of bright crystal that shred the skin of anyone not safely under cover. "Rain" explores this escalating apocalyptic event, as the deluge of nails spreads out across the country and around the world.

In "Loaded," a mall security guard in a coastal Florida town courageously stops a mass shooting and becomes a hero to the modern gun rights movement. But under the glare of the spotlights, his story begins to unravel, taking his sanity with it. When an out-of-control summer blaze approaches the town, he will reach for the gun again and embark on one last day of reckoning.

Masterfully exploring classic literary themes through the prism of the supernatural, Strange Weather is a stellar collection from an artist who is "quite simply the best horror writer of our generation" (Michael Koryta).

I'm a little ashamed to admit that Strange Weather is my first Joe Hill book. I’m not sure what took me so long, but the four novellas in this collection have convinced me that I've been missing out on something very good.

The stories are thematically bound by weather events, but they are also commentary on topics that touch a raw nerve in modern times.

The first story, ‘Snapshot,’ was not at all what I expected; not from my initial impressions of what kind of writer Hill might be, and not even from what I found in the opening paragraphs.

Mike Figlione is thirteen and the type of kid who develops a lively sense of creativity because his awkwardness leaves him short on friends. Tinkering on an invention in his garage, he is interrupted by his neighbor and former babysitter, Shelly Beukes, who shows up in his driveway, lost and confused.

After escorting Shelly home, Mike stops by a convenience store and manages to make an enemy out of The Phoenician, a mysterious stranger with an instant camera that robs its subjects of their memories, one snapshot at a time. That night, in the middle of a terrifying storm, Mike is left to watch over Shelly to keep her from wandering away again. Wrestling with the onset of maturity, he realizes that Shelly is more to him than just an old babysitter. Though he’s poorly equipped to defend anyone, Mike understands that he must do his best to protect Shelly from The Phoenician.

The story is a bittersweet celebration of Shelly’s and Mike’s memories and how they overlap to create a poignant, shared backstory that begins to fade as Shelly’s memories die. ‘Snapshot’ boasts a very complete protagonist arc, packed full of emotional resonance.

‘Loaded’ starts off with what appears to be an unrelated string of events that share one common element: guns. The narrative follows three characters: Aisha Lanternglass, a girl who sees a young man she considers to be a brother killed by the police; Becki Kolbert, a young woman whose married employer is teaching her all sorts of things at firing ranges and in motel rooms; and Rand Kellaway, a mall security guard whose ex-wife has hit him with a protection order that requires him to surrender his firearms to the local sheriff’s office.

As you might guess, this story contains intensely differing viewpoints. The conclusion should provoke a reaction — for better or worse — from everyone.

In ‘Aloft,’ Aubrey Griffin is not the kind of guy you’d expect to see jumping out of a perfectly good airplane, even with a group of buddies in tribute to a departed friend. Scared and at the point of backing out, something goes wrong with the plane and everyone must jump. Aubrey and the jump master he’s attached to quickly collide with a cloudy alien landscape, but when they disengage harnesses, the jump master is whisked away by his partially deployed parachute.

Aubrey is left marooned on a floating island that seems to understand his wants and tries to provide those desires in return for Aubrey’s presence. He has plenty of time to contemplate what’s broken in his life, and to decide if it’s worth bothering to work on a virtually impossible plan for escape.

‘Aloft’ is a curious portrait of a man at a crossroads in his life against a very unique backdrop. But Aubrey’s shift in self-awareness is much lighter fare than the other three stories that go straight for the throat. It’s beautifully written, but feels a bit like a palate cleanser.

I don’t want to say much about the final story, ‘Rain.’ There were a few surprising moments, and I’d prefer not to upend them. It’s a story about deadly rainfall with potentially apocalyptic consequences, has a very strong and compelling protagonist, and a diverse array of supporting characters. It touches on terrorism, human interference in the natural world, and says a whole lot about how people treat each other. It’s a thought-provoking coda to the book.

Should you read Strange Weather? Do you like horror and sci-fi? Do you enjoy novellas with their ability to give you full-blown characterizations with a shorter time commitment? Can you handle stories that actually make you feel something, even if it’s anger or empathetic sorrow? Are you OK with having your beliefs challenged a bit? You answered “yes” to at least one of those questions, right? Then, yes, I think you should read this book.

Hill is a skilled writer with all of the confidence and insight required to push a reader’s buttons. The book made me cry, made me angry more than once, and made me examine my own views. That’s a lot to ask from an unassuming bundle of stories, but Strange Weather delivers way more than what’s on the tin. Highly recommended.
Posted by Qwill at 9:06 AM