That cry, said aloud or to oneself has propelled legions of gamers for the last 25 years. Ever since the original game came out in 1991, each iteration of Civilization has changed and expanded and reworked the game, sometimes subtly, and sometimes in rather radical departures from the previous iteration. There have been DLCs and add ons for the more recent versions as well, sometimes making a whole new game out of the core engine. There have been a few “spin off” games, like Sid Meier’s Alpha Centauri, which is “Civ in space” with the added wrinkle of telling a story of transhumanism and colonization of an alien world in the bargain.

I’ve played them all. Since the original Civilization, anticipating and buying the new Civilization has been in my blood. The anticipation of firing up Rome (the Civ I *always* play first by tradition, and the default when I want to play Civ in general) and expanding out that map, exploring, meeting neighbors, and taking over the world, one way or another.

Now, the latest iteration of Civilization, Civilization VI, is now out. How does it stack up to its predecessors? How intuitive is it for new players? Does it still have that one more turn feel? 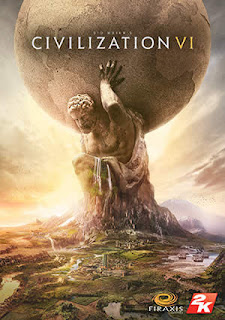 After picking your civilization, and other options, the typical Civilization screen is to see your Settler, and sometimes another unit, in a small area surrounded by black. Revealing that blackness, finding out what’s there, discovering the world is very much a key Civilization experience. For many people, this is the most fun part of the game, and it is for me, too. So the start came as a bit of a surprise.

That sepia map of the world around is lovely, even if it's not what I expected. I’ve seen this effect used in other games before, other “4X” games that Civilization pioneered, but this is an early marker to a player of previous Civilizations that some things are going to be new. Cities are definitely something that follows this. In games past, cities took up one square, and everything you built, monuments to wonders was in that square. Or should I say, hex. The first four Civilization games used a square grid, but Civilization V, the previous game in the series, changed things to a hexagonal tile map.

Civilization VI takes the hex map further. Cities, and wonders take up space, sprawling across the map. This makes the planning of cities out into a mini game in a way it rarely was before in earlier games. In some earlier games, there were arguments as to the “optimal” build. Here, where you build a city and decide to place its districts, matters and changes things enormously. Not every city can potentially build every World Wonder, as one could in previous games. There are restrictions on tiles for many of them. The Terracotta Army, for example, needs to be built on flat land next to an encampment. If your city doesn’t have an encampment, or the right land next to one, you simply can’t build the wonder even if you’ve researched the prerequisites. It makes city building and planning a far more complicated process than previous games, where one could practically build to a predetermined schedule (assuming no calamities to change the pattern). It also means that your opponents cannot race to the same Wonders as you do without fail. (In Civilization, if another Civ builds a Wonder, no other Civ can build it. There is and can only be one Potala Palace or Oxford University)

It's not all new. Many of the things are still there. Civilizations, some old favorites, and some new ones, and some new leaders for those Civs. In previous Civilization games, Rome was always led by Julius or Augustus Caesar, or sometimes both. This time, Trajan steps up to be your leader, your Optimus Princeps. There are more female leaders than in years past, and some unusual choices in that direction, especially with new Civs like Tomyris leading the horse-riding Scythians, or even the inspired choice of Catherine de Medici as the leader of France. As a sign of things for the future, Greece has a choice of leaders with different bonuses. You can play as the domestic focused Pericles, or as the warlike Queen Gorgo. This suggests, and I hope, there will be more leaders for the existing civilizations in the future.

The speculative element of Civilization VI is in the stories you can create, on maps real and unreal. What would happen if the Japanese rose to power, and had to fight for dominance against the Spanish and the Egyptians? The culture rise of India, even as on the other side of the globe, Brazil strives for similar dominance, while Australia and the United States fight each other. The long story of the Persians, slowly and inevitably conquering the globe. It’s these alternate historical and never-could-have-happened stories that give Civilization VI (and its previous iterations) that alternate historical feel.

But does it have that one more turn feel? Well, in the writing of this review I soon found myself immersed in a game where my Roman Empire was born, expanded, got into tangles with the Aztecs and Spanish (who,much to my disappointment, never got to fighting each other), got into a religious war declared on me by Greece, and eventually wound up sending a colony to Mars, with a science victory for the industrious citizens of the Eternal Empire. So, in the end, the answer is yes.

Paul Weimer is a SF writer, reviewer, and podcaster and an avid amateur photographer. When he isn’t doing any of that, he’s often found rolling dice and roleplaying. His audio work can be found on the Skiffy and Fanty Show and SFF audio. His reviews and columns can also be found at Tor.com and the Barnes and Noble SF/F blog, amongst other places. Paul is best seen on Twitter as @princejvstin.