Hello again. I hope you are having a crisp and colourful autumn.  I have been hearing how beautiful the autumn trees are this year and looking forward to seeing them. In fact by the time you are reading this I will be in Canada on holiday and enjoying the leaves in all their glory.  As I mentioned last week I have a tiny backlog of books I have to tell you about so while this post is called my week in review it isn't specific about which week!  Cheeky!  Anyway, here I go....this is what I have been reading.

I follow Ilona Andrews' blog and occasionally Ilona tells you about a book she has been reading.  This time she had read and enjoyed Cassandra Gannon's The Kingpin of Camelot which is the third book in her A Kinda Fairytale series. Andrews thought the book was really funny and I was in need in of funny and decided to give it a go.

The Kingpin of Camelot is a mishmash of every fairy tale you have ever heard. The books of the series focus on different fairytale characters and in this instalment Lady Guinevere is on the run with her daughter Avalon. She has been charged with killing her husband King Arthur and The Scarecrow is determined to marry her to become the next King. Gwen escapes and runs straight into the home (and later arms) of the most unlikely alley - the ultimate mobster - the Kingpin Midas. Everything Midas touches is gold and he has everything money, or gold could ever buy except for class. When he comes face to face with Gwen he releases that she can give him the class he desperately wants but more importantly he realizes she is his 'true love'. In Gannon's version of fairy tales everything is topsy-turvy - the good are actually quite bad and the bad are kind of good. The Bad, as they are called, can recognise their true love at first sight. Midas isn't sure whether it is going to be easier to rescue Gwen from The Scarecrow or convince her she is his true love but he is up for the challenge. Can Midas turn his relationship with Gwen into gold like he has with everything else he has ever touched?

The Kingpin of Camelot was just what I needed at the time. I wanted something lighthearted and while I don't normally enjoy a lot of PNR it usually means an uncomplicated read. I am not convinced I would have enjoyed this book had I been reading other more enjoyable or compelling books but it filled a book shaped gap. Gannon gave both Gwen and Midas some very amusing lines and situations. I did think that Avalon (Gwen's daughter) was a bit too cutsey and the chapters where she was the focal point were sugary sweet. If you like fairytales and want to read something a bit different with a strong PNR plot then give it a go. I did read other books in this series and will let you know what I thought in future posts.

If you read my WIR last week you will know that I have been reading Kate Griffin's Kitty Peck series. Onto book 2 - Kitty Peck and the Child of Ill Fortune - which finds Kitty in a much different situation to when we left her. She has inherited Lady Ginger's business including the musical halls where she found the depths of human suffering and the bonds of friendship. With her inheritance she discovers the yoke that had been around Lady Ginger's neck and why she was so fierce, seemingly cruel and always surrounded in a fugue of opium. Kitty also learns that her brother is very much alive and living in Paris and determined to be reunited. Unfortunately, a joyous family reunion isn't in the cards but instead this leads Kitty onto yet another path of cruelty and death.

Another gripping tale from Kate Griffin from start to finish...perhaps not quite as much as with book 1 but pretty close. Poor Kitty! I kept thinking all the way through.  Just when she makes one small step to uncover the truth the farther and farther she moves away from it. Kitty's reunion with her brother is bittersweet and Kitty's longing for the way things used to be is palatable even though it becomes clear that reality and her recollections are not one and the same. There are a couple of tragic events in store for Kitty in this instalment and a very sad ending. Reader beware!


That is it for me for another week. I hope you have had a couple of good books to enjoy this week. Be sure to check out my review of the next Kitty Peck book. Until then Happy Reading. 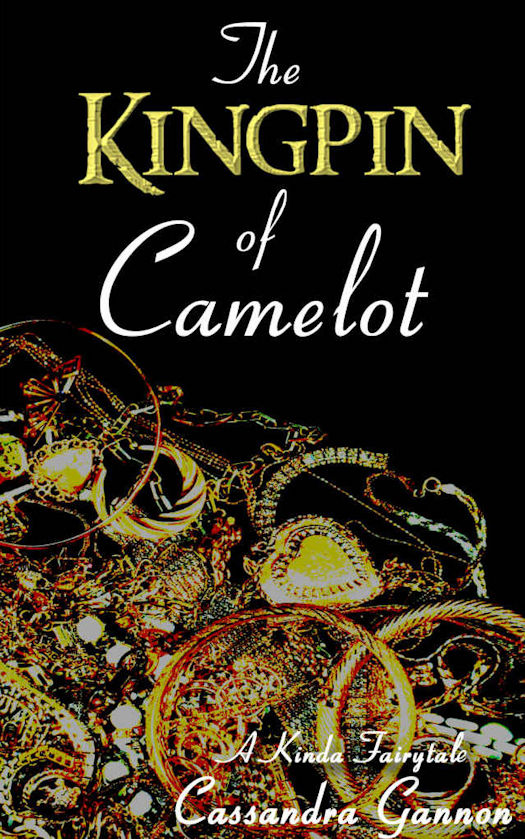 The Queen: Guinevere must save Camelot. Ever since Arthur died, the evil Scarecrow has been trying to marry her and gain the crown. If she and her daughter are going to survive his mad schemes, Gwen needs to find Merlyn’s wand. Fast. Unfortunately, the only man strong enough to help her on her quest is Kingpin Midas, a flashy, uneducated mobster dealing with a curse. Gwen is a logical, rational woman, though, and she can draft one hell of a contract. She’s pretty sure she can come up with an offer not even the kingdom’s greatest villain can refuse.

The Kingpin: Anything Midas touches turns to gold. Literally. The curse has helped him to rule Camelot’s underworld with an iron fist. He has more money and more power than anyone else in the kingdom. He’s convinced there’s nothing he can’t buy. One look at Gwen and Midas knows that he’s about to make his most brilliant purchase, yet. He’s about to own the one woman in the world he would give anything to possess. All he has to do to claim her is somehow win a war against the smartest man in Camelot, hide his growing feelings from Gwen, deal with his overprotective bodyguard’s paranoia about the queen’s hidden motivations, and adjust to a five year old demanding bedtime stories from a gangster. Simple, right?

The Contract: Gwen’s deal is simple: If Midas marries her, she’ll make him King of Camelot. It’s a fair bargain. Midas will keep her enemies away and she’ll give him the respectability that money can’t buy. She never expects Midas to agree so quickly. Or for their practical business arrangement to feel so… complicated. Midas isn’t the tawdry, feral animal that Arthur railed against. He’s a kind and gentle man, who clearly needs Gwen’s help just as much as she needs his. In fact, the longer she’s around Midas the more Gwen realizes that their “fake marriage” might be more real than she ever imagined. Kitty Peck is taking on the underworld of London's East End.

The Music Hall Murders:
It's 1880 and dancing girls are going missing from 'Paradise' - the criminal manor run with ruthless efficiency by the ferocious Lady Ginger. The Lady devises a singular scheme to discover the secret to the mystery, and suddenly seventeen-year-old music hall seamstress Kitty Peck is drawn into a web of blackmail, depravity and murder. Bold, impetuous and blessed with more brains than she cares to admit, Kitty, with the help of her stagehand friend, Lucca, is left to unravel the truth and ensure that more girls do not meet with a similar fate.

The Child of Ill-Fortune:
A year later, and Kitty Peck is the reluctant heiress to 'Paradise'. Far from the colour and camaraderie of the music hall where Kitty had been working, this new position brings with it isolation and uncertainty. Desperate to reconnect with Joey, her estranged brother, Kitty travels to Paris, but the joy of the reunion is overshadowed by his request for her to take a child back to London. Within days of her return it's clear that someone has followed them - and that this someone is determined to kill the child, along with anyone who stands in their way...