“I am thrilled to see this world unfold thanks to Singgih, and my designs taken to new heights in the capable hands of Sami!” said Curphy. “Seraphim started out as a superhero helmet I made for myself years ago, and the folks at Glitch have made that come to life as an action figure and now a comic book. As a toy/comic fan for 30+ years, this is a dream come true!”

In an alternate world where Earth is populated with powerful human-spirit hybrids called Fantasmen, Folke and Roisia Herviett, two siblings with opposing worldviews, are challenged to prove their worth and take up their parents’ positions in a devious group that secretly runs the world. Meanwhile, Seraphim, a Fantasmen warrior guard, is sent to prevent a catastrophic event from affecting the Earth and its own universe.

“To build a unique world and write an engaging story from action figure lines is an interesting challenge, especially for a guy who spent his last decade writing for advertising,” said Nugroho. “But with inspiring design from Mel and great interpretation from Sami, I believe we just cracked an appealing approach that will excite readers.”

“When I was shown Murphy's designs for this comic, I was blown away,” added Basri. “I love fantastic creatures, but my previous projects didn't really involve much of them as a subject, so I was really happy at the chance to do DISSONANCE. Being given the liberty to help visually develop a totally new fantasy world, with an edgy script accompanying—it's a fantastic feeling.” 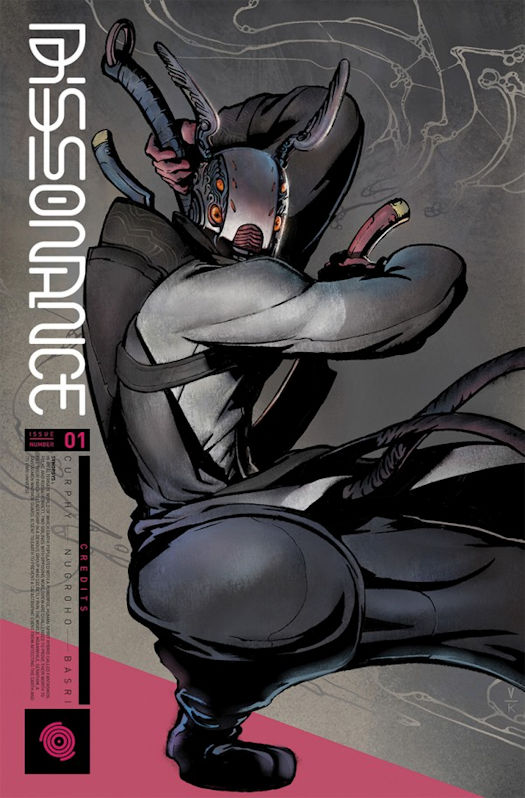 ABOUT IMAGE COMICS
Image Comics is a comic book and graphic novel publisher founded in 1992 by a collective of bestselling artists. Image has since gone on to become one of the largest comics publishers in the United States. Image currently has five partners: Robert Kirkman, Erik Larsen, Todd McFarlane, Marc Silvestri, and Jim Valentino. It consists of five major houses: Todd McFarlane Productions, Top Cow Productions, Shadowline Comics, Skybound Entertainment, and Image Central. Image publishes comics and graphic novels in nearly every genre, sub-genre, and style imaginable. It offers science fiction, fantasy, romance, horror, crime fiction, historical fiction, humor and more by the finest artists and writers working in the medium today. For more information, visit www.imagecomics.com.
Posted by Qwill at 9:06 AM