BINGO LOVE is about two Queer, Black women and the love between them that spans decades. Their story also explores the complications of coming out at an older age, and how that decision affects their families lives. BINGO LOVE will hit stores just in time for Valentine’s Day, February 2018.

"As a woman who was married once upon a time, I understand how it is to come out as a Queer woman to my family,” said Franklin. “Bingo Love was important for me to create for the youth, the LGBTQ youth needs to understand that happily-ever-after's aren't only for straight people. If Disney's Carl and Ellie can grow old together, so can Mari and Hazel.”

Hazel Johnson and Mari McCray are two young, Black girls who meet at church bingo in 1963 and eventually fall in love...but in this time period, their love was not accepted. Hazel and Mari are broken up by their families’ “shame” and go on to marry and have families of their own. Almost fifty years later—in the fever pitch of church bingo—Mari and Hazel are reunited and rediscover the love they have for each other, even though they both are still married.

Tee Franklin is a Black, Queer, disabled woman, known in the comics industry as a vocal person of color and advocate for the LGBTQ and disabled community. She is credited for starting the popular hashtag: #BlackComicsMonth which aims to make comic book fans more aware of talented Black comic creators, and their diverse comic book characters and superheroes that already exist in the industry.

Franklin won the 2017 Queer Press Grant for BINGO LOVE and has raised almost $60k for this graphic novella via Kickstarter. 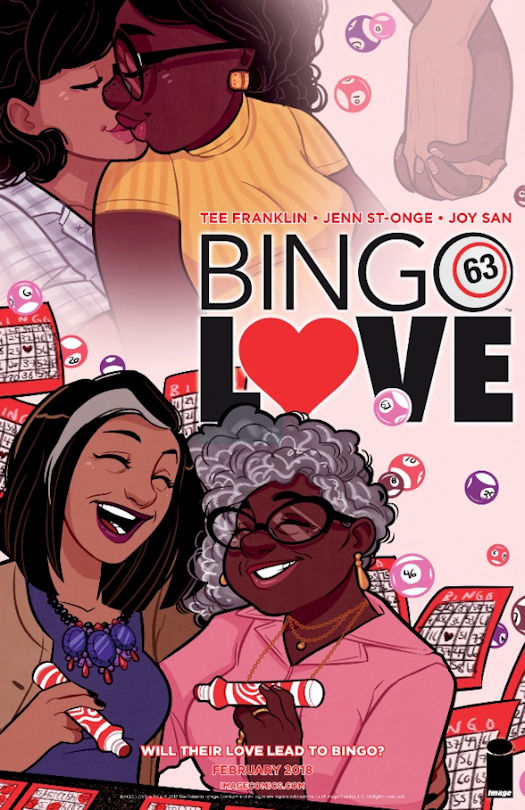 ABOUT IMAGE COMICS
Image Comics is a comic book and graphic novel publisher founded in 1992 by a collective of bestselling artists. Image has since gone on to become one of the largest comics publishers in the United States. Image currently has five partners: Robert Kirkman, Erik Larsen, Todd McFarlane, Marc Silvestri, and Jim Valentino. It consists of five major houses: Todd McFarlane Productions, Top Cow Productions, Shadowline Comics, Skybound Entertainment, and Image Central. Image publishes comics and graphic novels in nearly every genre, sub-genre, and style imaginable. It offers science fiction, fantasy, romance, horror, crime fiction, historical fiction, humor and more by the finest artists and writers working in the medium today. For more information, visit www.imagecomics.com.
Posted by Qwill at 7:30 AM