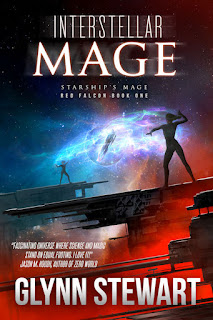 Glynn:  Thanks for having me!

I have always written. I don’t remember a time when I didn’t write, I always had so many ideas to try and get out of my head.

Glynn:  Mostly a plotter, though probably at least partially a hybrid. I write an outline, of varying levels of detail, before I get started, but the final book usually has at least one major divergence from the outline.

Glynn:  Magic meets light speed as a simple cargo starship – powered by magic – is dragged into politics and an underworld crime war.

TQ:  Tell us something about Interstellar Mage that is not found in the book description.

Glynn:  Interstellar Mage brings back many of the characters from Starship’s Mage that didn’t show up in the rest of the series—and they’re about the only people on the new ship without secret agendas!

TQ:  Does Interstellar Mage tie-in to any of your other series - Starship's Mage, Castle Federation or Duchy of Terra?

Glynn:  It’s the first book in the second series of the Starship’s Mage universe, starting off a trilogy that runs in parallel to the second and third books of that series.

The first Starship’s Mage series follows Damien Montgomery as he goes from an unemployed (and desperate) jump mage to Hand of the Mage King. It starts with Starship’s Mage itself, but readers can also start with Hands of Mars.

This second series is intended as a second starting point for readers, following the captain of Damien’s first ship – David Rice – as he takes over the Red Falcon and has misadventures of his own.

TQ:  What is Space Fantasy?

Glynn:  It depends on who you ask! Star Wars is, of course, the biggest known example of it. There have been a few series over the years with magic in space, or with psionics to the point where it may as well be magic!

For myself, it’s taking a setting where the engineering and science and so forth are done with as much fidelity as possible, and then a layer of magic is put in place to allow for the “impossible” things that are such a feature of the space opera genre.

TQ:  What sort of research did you do for Interstellar Mage?

Glynn:  A lot of my technical and scientific research for this setting is already done and written up in assorted setting bible documents.

One of the things I had to codify for Interstellar Mage though was freight rates and scale. Given the scale of interstellar shipping in the setting—starship captains rarely deal in less than a standard 10,000 ton shipping container—the numbers get odd when you break them down to a per-ton level.

For the cost of getting about ten tons of cargo from China to the United States today, you could get a 10,000 ton shipping container from Earth orbit to orbit of the Alpha Centauri colonies.

Of course, getting it into and down from orbit is an entirely different story!

TQ:  In Interstellar Mage who was the easiest character to write and why? The hardest and why?

Glynn:  Easiest was David Rice. I’ve already been in his head and he fits into one of my standard “character archetypes” quite handily.

Hardest was probably Maria Soprano. I’ve written female characters before who were, basically, Honor Harrington style badasses. Soprano is a badass in her own right, but she’s also a more actively sexual and feminine character, which was a difficult balance to walk and not one I’m sure I got right.

TQ:  Which question about Interstellar Mage do you wish someone would ask? Ask it and answer it!

Glynn:  “Who else is coming back from Starship’s Mage?”

A bunch of people, but most notable I think are Kelly LaMonte and Alaura Stealey, two very different, very badass ladies who both have a dramatic impact on the story.

TQ:  Give us one or two of your favorite non-spoilery quotes from Interstellar Mage.

Glynn:  “So far two people have tried to kill you and we’ve been dragged into one major political crisis. This all feels far too familiar. Are you sure Damien was our bad luck charm?”

Glynn:  We have a release schedule up on the website at www.glynnstewart.com that we keep reasonably updated.

Next release after this is Changeling’s Fealty, another foray into Urban Fantasy for me, followed by the sixth and final Castle Federation book, Operation Medusa, which I am currently writing.

My co-writing project with Terry Mixon should also see a second release this fall, and the Red Falcon series has two more books next year.

And then, well, we return to the Starship’s Mage primary timeline with the first book of UnArcana Rebellions.

I have a busy year coming up!

Glynn:  Thank you for having me! 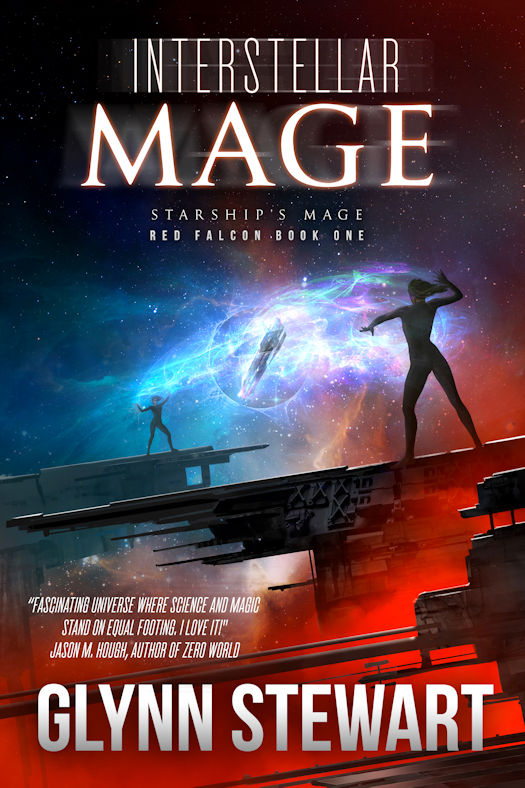 Mars destroyed his ship — but gave him a new one.
Mars drafted his Mage — for the good of humanity!
He should have known that wouldn’t be the end of it…

Captain David Rice has a new ship, a new crew, and a new set of Jump Mages to carry him between the stars. All he wants is to haul cargo, make money and keep his head down.

His past, however, is not so willing to let him go. An old enemy is reaching out from beyond the grave to destroy any chance of peace or life for Captain Rice—and old friends are only making things more complicated!

All he wants is to be a businessman, but as the death toll mounts he must decide what is more important: his quiet life or the peace humanity has enjoyed for centuries… 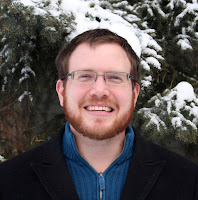 Writing managed to liberate Stewart from a bleak future as an accountant. With his personality and hope for a high-tech future intact, he now lives in Canada with his wife, his cats, and a portable cast of thousands for readers to meet in future books. You can learn more about Glynn Stewart at his website, glynnstewart.com. 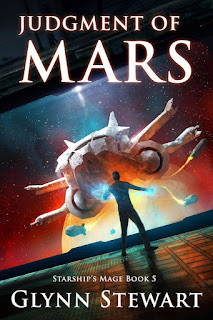