Please welcome Robert J. Duperre to The Qwillery. Soultaker, the first novel in the Knights Eternal series, was published by Ragnarok Publications in July. 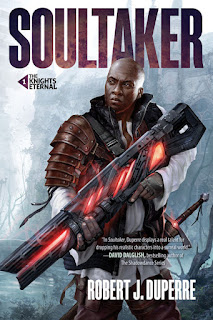 MY BASICS FOR PLAYING GOD

People are always telling me, “Wow, Rob, you’re so awesome at world building! How do you do it?” Of course, “people” actually means “two individuals,” and no one’s ever asked me how I do it, but hey, I thought it would make an interesting blog post, so here we are.

The truth is, I think I am pretty good at world building. I mean, if a well-known author seeks your help to expand upon and define the universe of their books, it must be true, right? Of course it is. So with that being said, here’s my own personal five-step process to playing god, a.k.a. inventing a believable and intriguing fictional universe.

Whether my story takes place on Earth in the current day or on some completely fabricated other world, understanding the lay of the land is important. Be it a post-apocalyptic wasteland, an epic fantasy kingdom, or a city as normal as Richmond, Virginia, knowing where everything is and how the landscape looks can help to heighten realism within the framework of the story.

I base even my fictional worlds on real-life counterparts. As an example, for an island territory in an upcoming book, I used the street layout for Los Angeles and went from there. When my setting is a real place that I’ve never been to and am unable to schedule an adult field trip, I put in tons of research, download maps and pictures and street views, read up on the history of the area, and visit message boards to get a sense of the surroundings and the commonalities I might see there—such as fashions, popular types of food, ethnic breakdown, stuff like that.

This attention to detail, and drawing maps of everything (even diagramming interiors), is one of the more tedious aspects of story prep that I put myself through, but I have to. From just a spatial relations standpoint, I can become inconsistent, and get myself lost, without it. Have you ever read a book where you can’t tell how far it is from one point to the next, or when, during a fight scene, you completely lose track of where a character is standing in relation to the action happening around them? That sort of thing drives me nuts, and when I was younger, I fell into that trap all the time.

Not anymore. Is mapping out everything like that a bit of overkill? Maybe. But, by and large, the advantage to both my mental wellbeing and my eventual product means that none of my time has been wasted.


A Rose is a Rose a Dandelion.

Names can be tricky. Modern humans have gotten more and more creative as the years have gone by when naming their children, but there’s still a sort of collective similarity, even with the newer names, that can tell you almost immediately either where a person is from or what religion they practice. Someone named Jokubas is probably from the Balkans, a girl named Ji Yeon is most definitely from South Korea, while a bloke who goes by Jaxon is quintessentially American.

Most of my fantasy includes various ethnicities and distinct locales, so creating diversity in names is important. Again, I often take examples from the real world, altering them just slightly, if at all. Do I have a society of devoutly religious people? I’ll use variants on Latin names. How about a warlord troupe? Then, maybe take some Irish or German and twist them around a bit. Or maybe, if I’m being daring, I’ll create a culture that has its own naming customs, such as one in which all names are symmetrical, such as Sabaz or Iallai, for example. Given the sheer number of names out there, there is almost no limit to what I can do.

I have a somewhat different convention for naming locations, and in that case, my personal mantra is the simpler, the better. If I have a town at the mouth of a port, maybe I’ll probably call it Portsmouth. A village founded by a guy named Adrian Lem? Lemsburg will work. I’d never dub something like that Indigotown. Well, not unless I want ridicule. But then again, I’m a glutton, so you never knew.

The key is to be consistent, no matter what it is I’m naming. The one thing I don’t want to do is have a bunch of people named Ahaesarus, Azariah, Judarius, and Mordecai, and then throw a Davey into the mix. There’s no better recipe for jolting readers out of a story than that.

We all know that you need conflict to help drive a narrative forward. Conflict between characters is obviously important, but I’ve always felt that, when creating a setting to plop those characters into, it’s just as vital to define the conflicts going on around them, if only to create a sense of realism. Every society has warts, after all.

Is there a religious struggle happening? A racial divide? Is one huge corporation bogarting all the salt in the region? Is political corruption the norm? Are the poor being forced to mine for diamonds? Or maybe a water shortage where the rich control what few resources there are left?

These are just a few of the scenarios I mull over when playing god. There are so many different narrative directions I can push my characters toward, and when I create a world rife with discord, I can use that conflict to help give the characters further definition. There has never been a person who grew up in a war zone, after all, for whom war hasn’t affected their outlook.

Plus, the world would be boring otherwise. Hazardous to my health too, because just the thought of putting my heroes and villains in a cardboard, ill-defined world makes me ill.

Nothing throws me out of a story quicker than inconsistent physics. Continuity matters.

If I’m crafting a world where supernatural abilities exist, I write out exactly what feats are possible, how those feats are performed, and the “science” behind why they work, while still allowing for ambiguity. If I were creating a simple magic system for a high fantasy universe, for example, then maybe I’d make it known that the magic is made possible by ancient runes carved deep into the mantle of the land. That way, it’s not necessary to reveal whether these magical abilities stem from gathering energy from different dimensions or are funneled from some hidden reservoir of power hidden in the planet’s core. I mean, I can go there and explain those aspects away if I want (and I often do), but once the delivery system is revealed, it isn’t truly necessary to explain further.

In the case of inventing a more realistic world, I find it important to stick with known conventions, even if I have miraculous events occur. There can be power in describing the fantastic in accepted terms, and I often find it adds a layer of believability to the tale. But the readers’ faith in what I’ve created can be easily squashed if I don’t stay consistent, which is why I need to research. Say I were to create a series of books that explored a scientifically plausible explanation for vampirism, and I succeed. How much of a mistake would it then be for me, the writer, to later on in the story have a very unrealistic portrayal of, say, nuclear power? While it’s true that some readers might gloss right over what I’ve done, some attuned bookworm will surely find my mistake and probably let me know.

Which, trust me, is something I very much want to avoid.

What do you do every day? Do you eat breakfast in the morning? Kiss your significant other goodbye when you go to work? Pray around the dinner table or before bed? Kneel facing Mecca? How much do you enjoy your job? Do you relax with a cold beer or a hot cup of tea when the day comes to a close?

Fictional characters, just like us, are defined by their routines, while the routines themselves are defined by the world in which they live. That’s why, to me, the most important aspect of any universe I’m writing in are those tiny, unremarkable moments that fill up my characters’ lives.

I always make sure to explore their political or religious beliefs (whether real-world or fictional), what kind of employment they have, their relative standing in the socioeconomic system I’ve set up, how they deal with law enforcement, relationships they have with their neighbors, what they do for fun, how they connect with their friends, how their upbringing affected their identity, and on and on and on. This all happens before I even type the first word of an outline, because if I don’t, then what will come out on paper might very well end up being a hollow shell, a bag-o’-bones, instead of a fully-formed, fleshed-out character. After all, if I, the writer, can’t connect with these people as, well, people, then how could I ever expect my audience to?

Which is important, because the audience is what matters most of all. 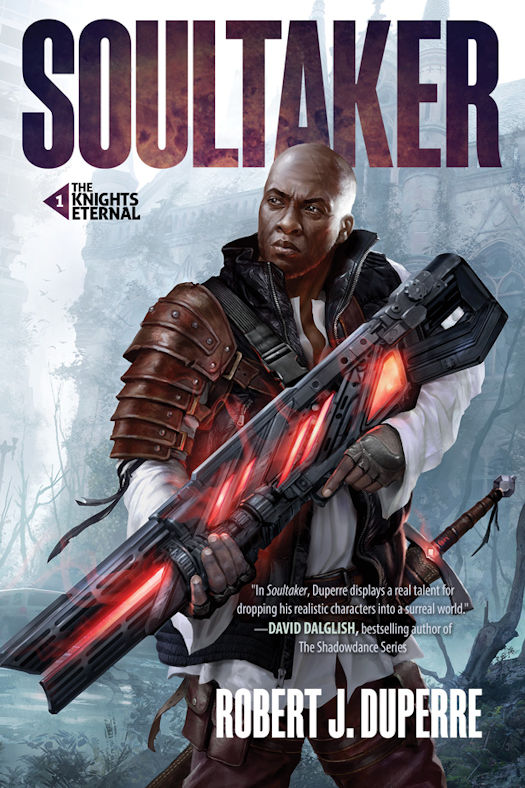 It's been a thousand years since the Rising.

Earth is a wasteland, and a holy order of knights is all that stands between what remains of civilization and the brigands and demons trying to bring it all down. When the oldest of these knights, Abe, isn't trying to keep his brothers in line, he's tirelessly attempting to decode the riddles that have guided the Knights Eternal for the past two centuries.

The visions Abe's been having aren't helping matters.

The latest riddle sends the Knights Eternal after a prophet and his band of Outriders. Or is it sending them to seek the Prophet's aid? It's a question Abe needs answered. With his sanity fleeing, more demons than ever rising from the Pit, and rumors circulating of an army of risen dead, failure for the knights might end the world this time once and for all.

Where else will reincarnated musicians become gun-slinging knights to patrol a post-apocalyptic wasteland? Only in Soultaker. This book by Robert J. Duperre takes a pound of Game of Thrones, a few cups of The Wild Bunch, a dash of Doom, and a sprinkle of Doctor Who, and mixes them all into a fun, horrific ride. 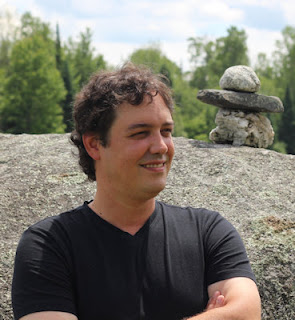 Robert J. Duperre is a really great guy. Actually, he's not. Though he is the author of eight novels that offer a mix of horror, science fiction, and fantasy, and co-wrote The Breaking World with David Dalglish an epic fantasy adventure series published by 47North. Robert lives in rural Connecticut with his wife, the artist Jessica Torrant.