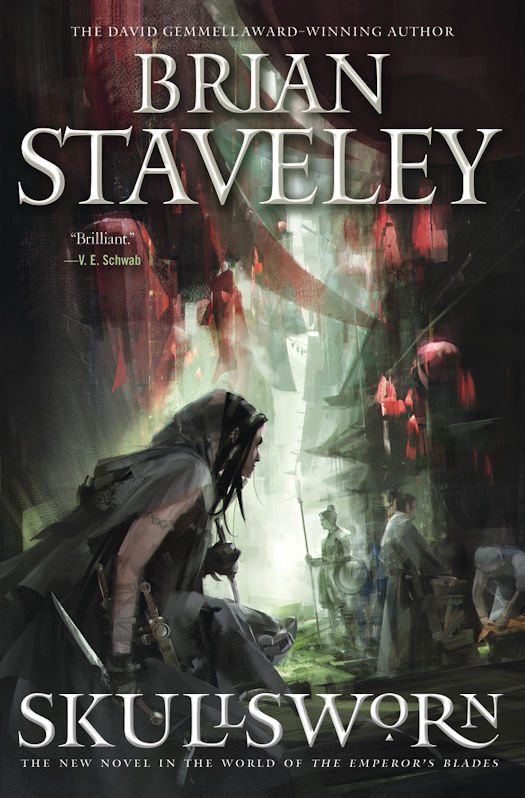 Brian Staveley’s new standalone returns to the critically acclaimed Chronicle of the Unhewn Throne universe, following a priestess-assassin for the God of Death.

Pyrre Lakatur is not, to her mind, an assassin, not a murderer—she is a priestess. At least, she will be once she passes her final trial.

The problem isn’t the killing. The problem, rather, is love. For to complete her trial, Pyrre has ten days to kill the seven people enumerated in an ancient song, including “the one who made your mind and body sing with love / who will not come again.”

Pyrre isn’t sure she’s ever been in love. And if she fails to find someone who can draw such passion from her, or fails to kill that someone, her order will give her to their god, the God of Death. Pyrre’s not afraid to die, but she hates to fail, and so, as her trial is set to begin, she returns to the city of her birth in the hope of finding love . . . and ending it on the edge of her sword.

Pyrre Lakatur must kill seven people in fourteen days or she will die. Pyrre however, is not afraid of death- rather, she is troubled by the thought of failure. Killing seven people would be easy for Pyrre, who belongs to a religion known among the populace as Skullsworn. She is accomplished in the many ways a life can be offered to Ananshael, the God of Death. However, to become a priestess, she must adhere to certain requirements; one of which is to kill the individual she loves. Love is something Pyrre has never experienced, so in desperation she has chosen Dombâng, the city of her youth for her Trial. There she will attempt to rekindle the passion she shared with former lover, Ruc Lan Lac, who now presides as constable over the troubled city. Accompanying Pyrre as witnesses are vivacious and deadly Ela, a legendary priestess of her order, and Kossal, a gruff older priest. Her Trial hinges on the hope that Ruc will let her get close enough so they can fall in love. Then she can kill him.

Skullsworn is set in the world of Brian Staveley's Chronicle of the Unhewn Throne series. Although Pyrre had a part to play in that trilogy, this standalone novel takes place years before those events. I like that Pyrre tells her own narrative in first person. It allows the reader to fully appreciate her history, motivations, and inner workings. She is a distinctive protagonist who is definitely more comfortable with her blades than her emotions. I particularly enjoyed her interactions with Ela, whose lessons are a delightful combination of philosophy, humor, and combat.

The city of Dombâng plays an integral role in the story. It still seethes under the martial law imposed upon it by the Annurian Empire centuries ago. Worship to its fierce gods is outlawed, but its people still believe in the forbidden sacrificial rituals, which leaves it ripe for rebellion. The deadly deltas and marshes that surround it are rife with a plethora of creatures that survive by preying on the weak. I really enjoyed the political intrigues and colorful, yet lethal locations that kept the action progressing in unexpected and exhilarating ways.

Because of her devotion to her deity, Pyrre's heartfelt journey of self-discovery is unlike any that comes to mind. Skullsworn kept me mesmerized from start to finish. I love the story's epilogue; it took me by surprise and left a smile on my face. Brian Staveley is both a master of the English language and an accomplished storyteller which makes this book a pleasure to read. Unique, bold, and exciting, Skullsworn is not to be missed.