Interview with AdriAnne Strickland and Michael Miller, authors of Shadow Run, Plus Review and Giveaway


Please welcome AdriAnne Strickland and Michael Miller to The Qwillery. Shadow Run was published on March 21st by Delacorte Press. 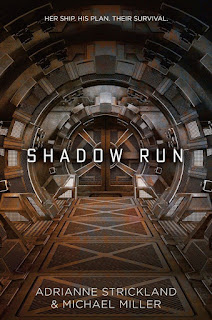 Okay! Good! Ready to go! Great to be here! Thanks for having us!

A:  I started writing as a pretty young kid—before I really knew the alphabet, really; I just used squiggles—because I couldn’t not. I started writing in earnest after college, though, with the intention of getting published. It took 5 years.

M:  For a variety of reasons, it was later for me—I’d say about age 8, and at age 13, I started churning out comics, newspapers, and “novels” in earnest. I didn’t take writing as a career until I was 17, at which point I developed a reward system for myself to make sure I wrote a page a day. I thought that stuff was really good, until I read it twenty years later.

TQ:  Are you a plotters, pantsers or hybrids?

Together, we have to be plotters or else the story would be all over the place with two authors! We needed a pretty clear direction—or outline—to stay in-sync.

TQ:  What is the most challenging thing for you both about writing? What is your co-writing process like?

A:  Writing is most challenging when it becomes a job, and you don’t have the luxury of waiting around for passion to strike. Sometimes you just need to sit down and force the words even if you’re not feeling them—and even if you have to scrap them all later. Writing together, though, was surprisingly easy. We fed off each other’s excitement, had amazing brainstorming sessions, and plotted our way out of corners by being a sounding board for one another.

M:  The hardest thing about writing is the “spin up” time. I have a long lag time between sitting down at the keyboard and actually hitting the “groove,” both of which are absolutely real phenomena. If you’ve given yourself three hours to write, and two of them are spent staring at the wall, it’s a problem! Fortunately, that’s where the GOOD part about coauthoring comes in—fear of your coauthor. I live in a perpetual state of panic, which is actually very good for productivity.

A prince in disguise tries to convince a starship captain that she can change the galaxy for the better before other royals can kill her.

TQ:  Tell us something about Shadow Run that is not found in the book description.

Both main characters think the other doesn’t understand the world. The truth is, neither of them do, but together, they are going to do the best job learning.

TQ:  What inspired you to write Shadow Run? What appeals to you about writing Science Fiction?

The usual classics like Star Wars, Dune, and Firefly inspired us, but also Alaska—and not because of the cold, breathtaking environment and commercial fishing, but also that “found family” feeling that a lot of us develop with our friends up here.

TQ:  What sort of research did you do for Shadow Run?

In retrospect, so much! We researched faster than light travel, of course, “paired” magnets, methods of manipulating stock markets, and sword fighting techniques that involve two blades. This latter, in case you were wondering, is pretty rare because it’s largely impractical but it does exist, in a sense.

TQ:  In Shadow Run who was the easiest character to write and why? The hardest and why?

A:  Basra was both the easiest and the hardest for me. S/he felt most natural to me (as we’re both genderfluid), but I also wanted to get the character right. There are so many nuances that couldn’t fit in this book, and so I hope we did Basra justice.

M:  Telu. I’ve spent most my life around people exactly like her, and she is a clever, angry, insightful, and loyal to a level of ferocity no one is likely to understand. She’s a hacker, and all the bottled up sarcasm that implies.

We wanted to write something ultimately entertaining, but to also discuss social issues that are important to us as Alaskans and also citizens of the world. One doesn’t exclude the other. You can still talk about issues like identity and cultural clashes and still have fun in a book. So we included those discussions that were important to us, and also swords and space princes.

TQ:  Which question about Shadow Run do you wish someone would ask? Ask it and answer it!

Would you rather live on Alaxak, the planet that Qole hails from, or Luvos, the royal planet? Alaxak, by any metric, until the suns burn out.

We just wrapped up copyedits on Book 2, and we’re starting Book 3! 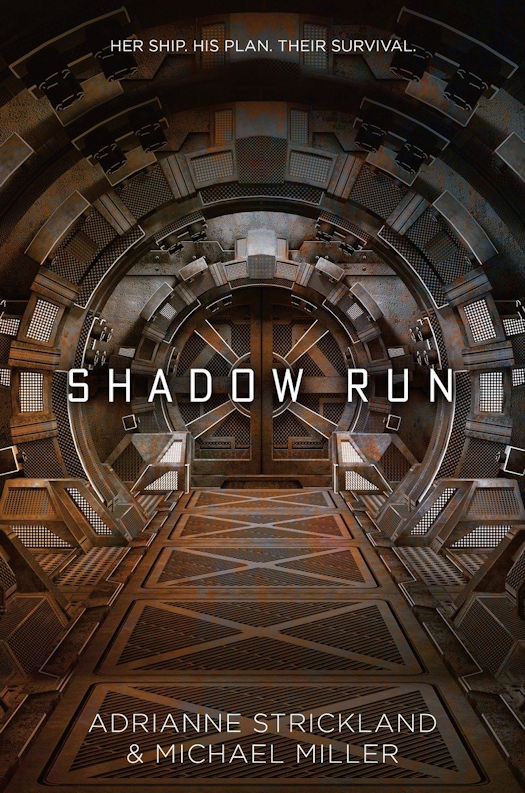 Firefly meets Dune in this action-packed sci-fi adventure about a close-knit, found family of a crew navigating a galaxy of political intrigue and resource-driven power games.

Nev has just joined the crew of the starship Kaitan Heritage as the cargo loader. His captain, Qole, is the youngest-ever person to command her own ship, but she brooks no argument from her crew of orphans, fugitives, and con men. Nev can’t resist her, even if her ship is an antique.

As for Nev, he’s a prince, in hiding on the ship. He believes Qole holds the key to changing galactic civilization, and when her cooperation proves difficult to obtain, Nev resolves to get her to his home planet by any means necessary.

But before they know it, a rival royal family is after Qole too, and they’re more interested in stealing her abilities than in keeping her alive.

Nev’s mission to manipulate Qole becomes one to save her, and to survive, she’ll have to trust her would-be kidnapper. He may be royalty, but Qole is discovering a deep reservoir of power—and stars have mercy on whoever tries to hurt her ship or her crew.

Shadow Run is the first novel in a new YA SF series by AdriAnne Strickland and Michael Miller. Initially set on and around the planet, Alaxak, and then on the planet Luvos and in between, the events take place years after the Great Collapse which isolated planets when the quick way to travel between them, the Intergalactic Ports, were destroyed.

The novel centers around the young Captain Qole Uvgamut, the crew of her starship, Kaitan Heritage: Arjan, Qole's brother and fabulous pilot, Telu, hacker supreme, Eton, in charge of weapons and protecting Qole, and Basra, the ship's trader. Nev is the newest crew member and everyone is a bit or more than a bit suspicious about him. But Alaxak is a place people come to get lost, to shed their own lives, and not to answer questions about it. So while suspicious, they let their concerns about Nev slide for the most part, at least initially.

Life on Qole's home planet is not easy. It's mostly bitterly cold and one of the only businesses there is Shadow fishing (in space), containing it, and selling it before it can degrade its canisters and kill everyone on the ship. Shadow is a volatile energy source. It's also poisonous and kills most of the people who work with it including Qole's parents and older brother. It's just a matter of time, Qole believes, until Shadow poisoning kills her too.

Nev had come to Alaxak searching for people like Qole. People affected by Shadow but who also are enhanced by it with amazing reflexes and augmented senses. Both Qole to a greater degree and Arjan are those people. Nev is actually a Prince of the family Dracorte and is hiding his identity both to be safe from other royal families and to not give away anything to Qole and her crew. Nev's ulterior motives for finding Qole become clear as the story progresses and his backstory is often as heartbreaking as Qole's.

The novel alternates between the points of view of Qole and Nev. Both are written so well that it's easy to tell who is relating the story (even without the chapter headings indicating that). They both are struggling with each other for a variety of reasons. Both undergo incredible changes by the end of the novel coming to grips with very personal events and losses. They are incredibly sympathetic characters and you can't but help root for them and feel deeply what they are going through.

Strickland and Miller have created a detailed universe as the backdrop to the story. Qole and Nev are caught up in political battles between great families vying to be in control, personal battles between family members (especially Nev's) and a variety of intrigues over which they have no control. Neither of them gets off easy and damage is done in a variety of ways. Many people in Shadow Run are not who they seem at all and both Qole and Nev have some hard lessons to learn.

While the novel moves at a fast clip it dragged in a few places for me but this is a minor issue and your mileage may vary. On top of great interpersonal relationships and finely developed characters, there are plenty of beautifully written battles, fights, and action! The authors have created some fabulous weapons too.

Shadow Run is a terrific start to an exciting new series and I can't wait to see where Strickland and Miller take the crew of the Kaitan Heritage next. Buy it for your teen, but read it first!

ADRIANNE STRICKLAND and MICHAEL MILLER met in their hometown of Palmer, Alaska, where they agreed on 99% of book taste and thus decided to write together. Adri spends her summers as a commercial fisherwoman in Bristol Bay, Alaska, and the rest of the year writing. Michael grew up off the grid in a homestead in Alaska and now works in IT and tech. This is their first book together. Visit them on Twitter, AdriAnne at @AdriAnneMS and Michael at @begemotike.

What:  One copy of Shadow Run by AdriAnne Strickland and Michael Miller from the publisher. US Only

How:
Who:  The giveaway is open to all humans on the planet earth with a US mailing address.