The Marvel collaboration allows us to bring our Fan Food philosophy to life in our new summer blockbuster Guardians Awesome Mix Blizzard treat,” says Barry Westrum, executive vice president of Marketing for American Dairy Queen Corporation (ADQ). “In the movie, the Guardians are stronger as a team. Likewise, we teamed up with Marvel to create a Fan favorite summer Blizzard treat flavor, mixing brownie and cookie pieces to create 'Brookie' pieces and combining them with caramel, choco chunks and DQ vanilla soft-serve."

Starting April 26 at 12 p.m. CDT, Fans can claim one of 1,000 Mission Mixtapes at MissionMixtape.com. Once claimed, Fans must search the galaxy for a cassette player to play the tape and get a special code for prizes ranging from limited edition, cast-signed Marvel Studios’ “Guardians of the Galaxy Vol. 2” movie posters to DQ gift cards. Each cassette tape also includes original, unofficial ‘bonus’ tracks. Fans can share their missions or follow along with #MissionMixtape.

Additionally, Fans can upgrade the small sundae in the $5 Buck Lunch meal to a small Blizzard treat for an additional $1.

The Guardians Awesome Mix Blizzard Treat and #MissionMixtape is part of the DQ brand’s collaboration with Marvel Studios’ “Guardians of the Galaxy Vol. 2,” in theaters May 5. The collaboration started with a DQ store location included in the movie representing something very timeless and iconic for the background of a scene. Check out a Marvel Studios’ “Guardians of the Galaxy Vol. 2” featurette to see more.

“We had a blast collaborating with Dairy Queen on this program,” says Mindy Hamilton, Marvel’s SVP of Global Partnerships. “Everything came together so naturally because, at our cores, both Marvel and DQ are committed to putting fans first. We hope that our efforts will bring smiles to faces around the country so that we can all kick off summer on the right note.”

International Dairy Queen, Inc. is a subsidiary of Berkshire Hathaway Inc. (NYSE: BRK.A and BRK.B), which is led by Warren Buffett, the legendary investor and CEO of Berkshire.

For more information about the Dairy Queen system, visit DairyQueen.com. Connect with the DQ brand on Twitter using #LOVEmyDQ and follow the brand at twitter.com/dairyqueen. Visit the DQ Facebook fan page, which has more than 10.7 million friends and become a friend at facebook.com/dairyqueen.

About Marvel Studios’ “Guardians of the Galaxy Vol. 2”

Set to the all-new sonic backdrop of Awesome Mixtape #2, Marvel Studios’ “Guardians of the Galaxy Vol. 2” continues the team’s adventures as they traverse the outer reaches of the cosmos. The Guardians must fight to keep their newfound family together as they unravel the mystery of Peter Quill’s true parentage. Old foes become new allies and fan-favorite characters from the classic comics will come to our heroes’ aid as the Marvel Cinematic Universe continues to expand.

Marvel Entertainment, LLC, a wholly-owned subsidiary of The Walt Disney Company, is one of the world's most prominent character-based entertainment companies, built on a proven library of more than 8,000 characters featured in a variety of media over seventy-five years. Marvel utilizes its character franchises in entertainment, licensing and publishing. For more information visit marvel.com. © 2017 MARVEL

International Dairy Queen, Inc. (IDQ), based in Minneapolis, Minn., is the parent company of American Dairy Queen Corporation (ADQ). Through its subsidiaries, IDQ develops, licenses and services a system of more than 6,600 locations in the United States, Canada and more than 25 other countries. IDQ is a subsidiary of Berkshire Hathaway Inc. (Berkshire), which is led by Warren Buffett, the legendary investor and CEO of Berkshire. For more information, visit DairyQueen.com. 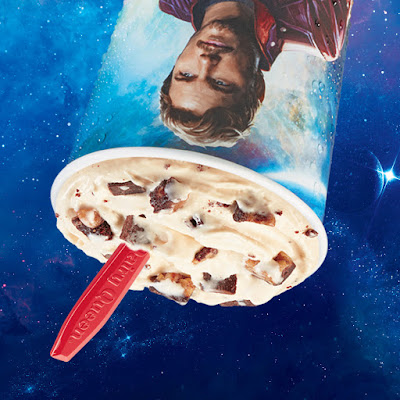 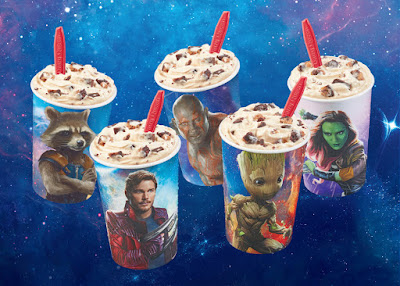 [click images to embiggen]
Posted by Qwill at 7:00 AM