Interview with Antonia Honeywell, author of The Ship


Please welcome Antonia Honeywell to The Qwillery as part of the 2017 Debut Author Challenge Interviews. The Ship was published on April 25th by Orbit Books. 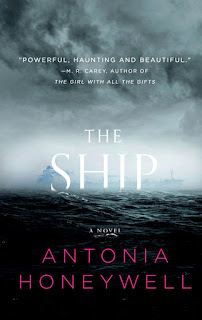 Antonia:  Hello! Thank you so much for inviting me.

I wrote my first novel when I was eight – it was a wet playtime at my primary school and we weren’t allowed to play outside. A group of classmates were playing snakes and ladders. I think I’d have liked to join in, but I didn’t make friends easily, and instead I found myself writing the story of a game of Snakes and Ladders from the point of view of one of the counters. I kept writing because, apart from reading, it was the thing I enjoyed doing most – I kept diaries, wrote long letters, and stories which I kept secret. I’m a teacher by training – the intention was to earn my living by teaching until I could earn it by writing. But I fell in love with teaching – I still think it’s one of the hardest and most valuable jobs anyone can do – and it took me over a decade to start working seriously on a novel, and another decade (and more novels) to get published.

Antonia:  I’m a panster first-drafter. It takes that roller-coaster ride of just letting the words come to work out what I’m writing about, where the focus of the story lies, what potential it has. It’s safe to say that my first drafts are largely unreadable! But they give me the material to begin crafting a working draft, and then the plotter in me takes over.

Antonia:  Finding the time. I was a full-time teacher when I began, running the English department of a huge comprehensive in Inner London. Then I married and began having children, which was just as time-consuming. There are always things that need doing more than my writing, and it’s not always easy to put my work first. But I’m well-organised and determined, which helps. I have writer friends who tell me that they have acres of time and still struggle, so I’m not sure there are any easy answers.

Antonia:  My reading, mostly. I’ve always read a lot – we had a village library close to my school, and as my parents both worked, I spent hours there, reading voraciously and indiscriminately. When they divorced, my life was torn apart, but the libraries in the different schools and towns gave me places I felt at home in. Opening the cover of a book is like unlocking an escape hatch into a new world. When I began to write, I realized how fine is the line between escape and self-discovery. No matter how unfamiliar or strange the fictional world, a reader is always searching for herself in it. I think that’s true of writers, too.

TQ:  Describe The Ship in 140 characters or less.

Antonia:  A father tries to save his child from a man-made apocalypse, and the child realizes that the truth is an ugly, complicated beast from which she must save herself.

TQ:  Tell us something about The Ship that is not found in the book description.

Antonia:  It’s a book about faith, and about belief. And about the stories we tell ourselves in order to justify the actions we’ve taken, or that we long to take.

TQ:  What inspired you to write The Ship? What appealed to you about writing a post-apocalyptic novel?

Antonia:  When we write about the future, we’re really writing about our fears for the present. That’s as true of George Orwell and Margaret Atwood as it is for me. For me, the fear for the future doesn’t lie in any one specific threat. Climate change, global warming, religious extremism – they’re all worrying, but hanging over these real and tangible concerns is a malaise that’s allowing a particular kind of political bullying to take the place of genuine debate. In the UK, for example, we currently have no effective opposition party. This means that initiatives are being implemented without being properly explored and examined. We need the friction of differing opinions to polish and refine our ideas, wherever we place ourselves on the political spectrum. But increasingly, I find people wanting to escape from the news, to create their own bubbles in which they interact only with people who agree with them and ignore, or dismiss, those who don’t. We’re beginning to write our own news, instead of studying the reality. The Ship is a fictional exploration of that tendency.

TQ:  What sort of research did you do for The Ship?

Antonia:  Oh, so much – everything from how much longer our oil supplies will hold out to the cubic footage of storage required for enough tinned tuna to keep five hundred people in protein for twenty years. I studied preppers and religious cults – opposite but strangely similar reactions to the prospect of the end of civilization. I studied the construction and maintenance of cruise ships. And I found a great deal of material by simply reading the papers. The interesting thing is how little of this concrete research made it into the final draft of the story. It forms a bedrock, but doesn’t appear on the surface.

TQ:  Please tell us about The Ship's cover.

Antonia:  I love the US cover. It’s mysterious and atmospheric, with that incredible flash of shocking pink. The hardback beneath the dustjacket is the same bright pink, which is a touch of genius – the very book design suggests hope in a seemingly hopeless universe.

TQ:  In The Ship who was the easiest character to write and why? The hardest and why?

Antonia:  Once I’d discovered Lalla, she became quite easy to write. At first, I wanted readers to love her as much as I do. But once I let go of that notion and allowed her to be what she is - a teenager who’s always had whatever she’s needed, and who has been the centre and sun of her parents’ existence since the day she was born – she lived and breathed quite naturally. Michael was harder. It would have been easy to write him as the tyrannical dictator he is, but I wanted to understand why people follow him and revere him as they do. Many speculative/futuristic novels take place in a society in which the good and bad are crystal clear – we know who are the terrorists and who the freedom fighters. And I love reading them. But I wanted Michael to exist in the muddier waters of intention and effect, and for Lalla to show the price that we pay for our confusion.

Antonia:  We’re living in a world in which the rich are getting richer and the poor poorer. Being rich is becoming confused with moral worth, and more and more doors are being closed to children whose parents can’t pay for them to be opened. And this worries me, because eventually choices will become the preserve of the wealthy, while the poor will do what they must to survive. This puts the future into the hands of the people who can pay for it, with no interrogation or exploration of what that future looks like. In The Ship, the collapse of society has made Michael Paul incredibly wealthy, and he is free to do exactly as he wants with that wealth. The only person free to question him and his motives is the reader.

TQ:  Which question about The Ship do you wish someone would ask? Ask it and answer it!

Q: How can you love such an ungrateful little toad as Lalla Paul, for whom the entire world of The Ship was created?

A: How can you do anything but love someone who has the courage to speak up for the sun in a world illuminated only by electric light?

TQ:  Give us one or two of your favorite non-spoilery quotes from The Ship.

Antonia:  At the beginning, Lalla asks her parents, ‘If the ship is real, why don’t we just get on it?’ I think of this whenever someone presents a simple solution (“Build a wall!” “Finish the relationship!” “Play together nicely!”) to a complicated situation. Ideas are wonderful, and the start to everything, but every solution contains problems of its own. I also enjoy Lalla thinking of herself as ‘a bubbling stream, lost in a ocean of salt.’ So often, the quiet, fresh, life-sustaining voices are drowned out by the clamour and glitter of those who think they have all the answers. But no one has all the answers. That’s why we need to listen more than we talk.

Antonia:  The Ship was sold on a one-book deal, and my subsequent writing occupies a different universe, so the path ahead is neither clear nor smooth. But it’s a rare writer who knows exactly what’s coming next – all I can do is keep writing, and writing, and writing. That’s what makes a writer, whatever stage they are at in their career.

Antonia:  Thank you so very much for having me; it’s been a pleasure. 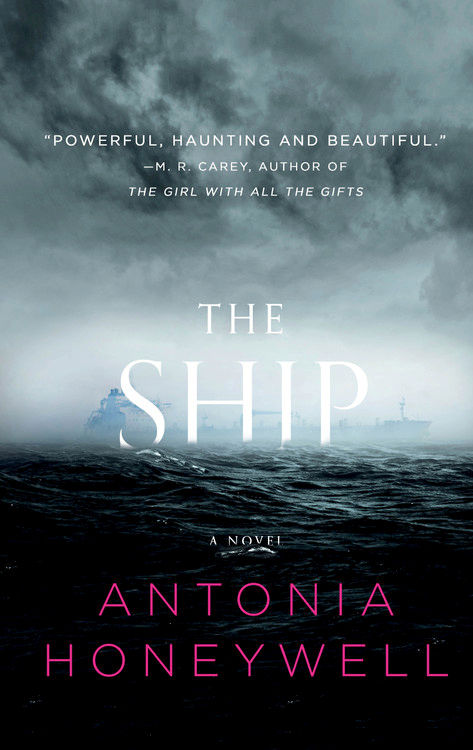 "Powerful, haunting, and beautiful," (M. R. Carey, author of The Girl With All the Gifts) The Ship is a luminous and genre-defying debut novel that follows a young woman's coming of age in a world where she has no future.

London burned for three weeks. And then it got worse...

Young, naive Lalla has grown up isolated in her parents' apartment, sheltered from the chaos amid the ruins of civilization. But things are getting more dangerous outside. People are killing each other for husks of bread, and the police are detaining anyone without an identification card. On her sixteenth birthday, Lalla's father decides it's time to use their escape route--a ship he's built that is only big enough to save five hundred people.

But the utopia her father has created isn't everything it appears. There's more food than anyone can eat, but nothing grows; more clothes than anyone can wear, but no way to mend them; and no-one can tell her where they are going.

Antonia Honeywell studied English at Manchester University and worked at the Natural History and Victoria and Albert Museums in London, running creative writing workshops and education programmes for children, before training as a teacher. During her ten years teaching English, drama and film studies, she wrote a musical, and a play which was performed at the Edinburgh Festival. She has four young children and lives in Buckinghamshire. The Ship is her first novel.