Embark on a Journey to Un'Goro

IRVINE, Calif.--April 06, 2017--(BUSINESS WIRE)-- Today, Azeroth's finest scholars and explorers have set out on their most ambitious expedition yet—the Journey to Un'Goro™. This new expansion for Blizzard Entertainment's smash-hit digital card game Hearthstone® is now live! Players from around the world are trekking into the heart of this primeval land on a mission to learn about the local inhabitants, harness astonishing elemental energies, and discover powerful minions hidden in the thick jungle mists—all while excavating 135 new Hearthstone cards to add to their collections. 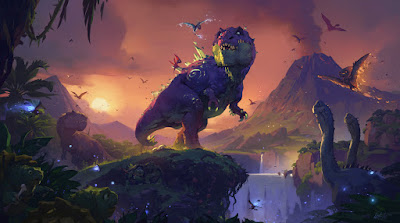 Journey to Un'Goro thrusts players into a land of primordial wonder where ancient elementals, lethal flora, and fierce predators have roamed since the dawn of time. Being an apex predator in such an unforgiving ecosystem has its benefits—the crater's dinosaurs have learned to adapt to any threat. Adapting allows a minion to take on new properties or powers to better deal with their prey, so don't let your guard down! As an enticement for those brave or curious enough to venture deep into Un'Goro, a mysterious new bounty awaits: Quest cards. These Legendary spells will always appear in the player's starting hand, and—once their requirements are met—grant incredible rewards.

"With dinosaurs and elemental minions and the new Adapt and Quest mechanics, Journey to Un'Goro begins the next Hearthstone chapter with a prehistoric punch," said Mike Morhaime, CEO and cofounder of Blizzard Entertainment. "We can't wait to see the strategies that deck-builders uncover as they explore the jungles of Un'Goro."

Journey to Un'Goro is available now for Windows® and Mac® PCs; Windows, iOS, and Android™ tablets; and iOS and Android phones. Card packs can be purchased individually or in discounted bundles from the in-game Shop for gold or real-world currency at the same price as all other Hearthstone card packs. Players now have the chance to win Journey to Un'Goro card packs as quest rewards or prizes in the Arena, and can also craft cards from the expansion by using Arcane Dust collected from disenchanting unwanted cards.

Learn more about the perils and wonders awaiting intrepid explorers in Un'goro Crater at www.ungoro.com.

Best known for blockbuster hits including World of Warcraft®, Hearthstone®, Overwatch®, the Warcraft®, StarCraft®, and Diablo® franchises, and the multifranchise Heroes of the Storm®, Blizzard Entertainment, Inc. (www.blizzard.com), a division of Activision Blizzard (NASDAQ: ATVI), is a premier developer and publisher of entertainment software renowned for creating some of the industry's most critically acclaimed games. Blizzard Entertainment's track record includes twenty-one #1 games* and multiple Game of the Year awards. The company's online-gaming service, Battle.net®, is one of the largest in the world, with millions of active players.

*Based on internal company records and reports from key distribution partners.