A Conversation with Daniel Suarez about CHANGE AGENT


Please welcome Daniel Suarez to The Qwillery. Change Agent will be published on April 18th by Dutton. Change Agent has been optioned by Netflix. 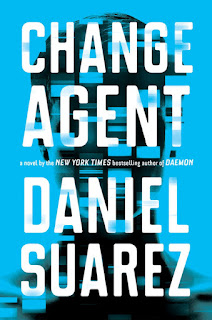 A Conversation with Daniel Suarez about CHANGE AGENT


1. What gave you the idea for the storyline of CHANGE AGENT?

I've always been fascinated by technological innovations and their implications for society. Having worked in tech for many years, most innovations I'd seen involved circuits and software, but several years ago, on a visit to MIT Media Lab, I first learned about synthetic biology. The idea that DNA was a primordial software language—one that could be used to create living programs from bacteria, yeast, or algae—was truly eye opening. That sent me on a multi-year quest to understand how living technology might transform our world. Along the way I learned about CRISPR-cas9 genetic-editing, and that's when the story for CHANGE AGENT clicked into place.


2. It might be set a couple decades in the future, but CHANGE AGENT has its foundation in gene-editing technology that's being developed as we speak. What kind of research went into writing this book?

Once I'd decided that CHANGE AGENT was going to entail a hero whose genetic identity is stolen from him, I began by re-familiarizing myself with the basics of genetics, DNA, RNA and cell biology. I then read deeply on current gene therapies, as well as CRISPR and synthetic biology. I consumed books by geneticists like George Church and Ed Regis, Juan Enriquez and Steve Gullans, Siddhartha Mukherjee, and many more. Only then, after I'd absorbed the basic ideas encompassing the transformational biotech just now coming into use, did I reach out and speak with geneticists and CRISPR researchers, as well as the director of a major police crime lab to ensure my story was built on an authentic foundation.

Researching my books is easily a third of the effort involved in writing them, but I'd be lying if I didn't admit that it's also great fun.


3. While doing research for CHANGE AGENT, did you learn anything about CRISPR that particularly surprised you or stuck with you?

What surprised me most was that almost no specialized equipment or advanced training is necessary to use CRISPR! For little more than a thousand dollars, you can set up your own at-home genetic-editing lab and begin editing E.coli bacteria to grant it bioluminescence or other traits using kits and books available on Amazon. This is why I think synthetic biology combined with genetic-editing is about to transform our world – because it won't require a multi-million dollar lab to experiment with; millions and millions of people (some of them children!) will tinker with CRISPR on their own. That broad availability is key. For example, the Internet was used in government labs and universities for decades, but it was only when hundreds of millions of average citizens got online, that the first browser and then the first blockbuster web sites appeared—bringing humanity into the Internet age.


4. In your personal opinion, could the future of CRISPR gene-editing depicted in CHANGE AGENT become real within the next few decades?

A world where deadly heritable genetic disorders like cystic fibrosis or Huntington's disease are routinely cured in vitro by CRISPR edits is, I think, just a decade or so away. From there, the list of curing edits and their complexity will quickly expand. Within two or three decades I think we will indeed see expectant parents tempted to imbue their progeny with genetic advantages that could transform the fortunes of their family line – greater height, longer life, better memories, and more.

Adding urgency to humanity's mastery of DNA will be climate change—which may require that we edit agricultural crops to withstand higher temperatures, less rainfall, and temporary submersion in salt water in response to rising seas and increasingly powerful storms. Likewise, cultured meats—growing muscle tissue in vitro, instead of an entire cow, pig, or chicken—will be necessary in coming decades to satisfy the growing global demand for meat, especially if we're going to avoid destroying the Earth's natural ecosystem.


5. Interestingly, you chose to set Singapore as the future technology capitol of the world. Why? Is there a cautionary tale you hope readers in Silicon Valley will take away from the book?

It is a cautionary tale, but not necessarily one directed at Silicon Valley. It's an admonition to an America that thinks reason and science are optional, or which believes we can indulge in fantasies without the rest of the world passing us by. Hard choices lie ahead of us – but also fantastic opportunities.

Cocooning ourselves in platitudes and ignoring scientific evidence is not going to keep America relevant through the 21st century.


6. The 2045 you imagine is a world with even greater socio-economic gaps in advanced societies than today. Those who live at the top enjoy a life greatly enhanced by incredible technology. Of the inventions or advanced technology you imagined for the book, do you have a favorite? And what are the odds we may actually see it (or others) occur in our lifetime?

Light-field projection technology fascinates me. It’s depicted in CHANGE AGENT as fully immersive images beaming directly into a viewer's retina, instead of onto a physical screen. In real life, this technology is in its infancy; however, it does exist—and even these early prototypes are amazing. Designed to project light in the same format in which we perceive physical reality, they will change the world in surprising ways. Why have a physical television if watching a virtual one is even more comfortable, realistic, brighter, bigger, and better for the environment? Why have a physical phone? Or a laptop? But on the flipside: can you believe what you see with your own eyes in a world with such technology?

I think we’ll have a chance to find out within our lifetimes, as the first generation of these devices already exists as prototypes.


7. What do you hope readers will take away from this book?

I want readers of CHANGE AGENT to be both excited by the possibilities of our future, but also sobered by the responsibilities required to make that future possible. We can't leave this to chance, and neither can we tell only positive uplifting stories. When it comes to the transformative power of technology, we need to imagine the good, the bad, and everything in between, and use our intellect to navigate the narrow path we choose. Countless future generations are depending on us to get it right.


8. Your books are known for taking current technology and imagining its future – often with shocking accuracy. How do you strike a balance between writing a fictional story that's still grounded in real science?

I begin from my own fascination with a real socio-technological trend – be it the power of narrow AI (DAEMON and FREEDOM™), autonomous robotic weapons (KILL DECISION), technological oppression (INFLUX), or humans controlling their own evolution (CHANGE AGENT). The technologies I choose are typically in their real world infancy—although sometimes I combine existing technologies in unexpected ways, the effects of which can be dramatic. For example, the Internet and the mobile phone existed separately for quite some time. Only when they combined into the smart phone did everything from social media to Uber become truly possible.

The immediacy of people connecting away from their computers, while walking the streets, changed everything—a seemingly minor difference with a huge impact. Thus, it doesn't have to be a major innovation that sparks massive change.

Once I've chosen the catalyst(s) for a novel, I follow the trail of causation, using what I know of human nature to derive the impact of that catalyst on social behavior. I then start to imagine the resulting society through the eyes of someone we care about, and that leads me from the world-building to the story-building.


9. What drew you to the sci-fi and tech thriller genres?

In some ways I view myself not as a sci-fi author, but as simply an author. That's because, increasingly, all stories are sci-fi stories.

High tech now pervades and powers modern life. Technology enables our work and mediates our personal relationships. That was not true even twenty years ago.

In that sense we live sci-fi lives—at least to our younger selves. I, for example, am old enough to remember a time when no one carried mobile phones, and when the Internet was reached over dial-up modem connections. But today, I've got broadband wireless tablet devices sitting around my house that I could theoretically use to broadcast live video feeds to an audience of millions. I've got 3D printers, robots that vacuum the floor, and aerial drones that can follow programmed flight paths. I routinely speak with narrow AI assistants, and my next car will probably be able to drive itself. In such a world, technology is merely the background against which we live. And that's what I write about.

And as for what drew me to thrillers: well, who doesn't like a good thriller? 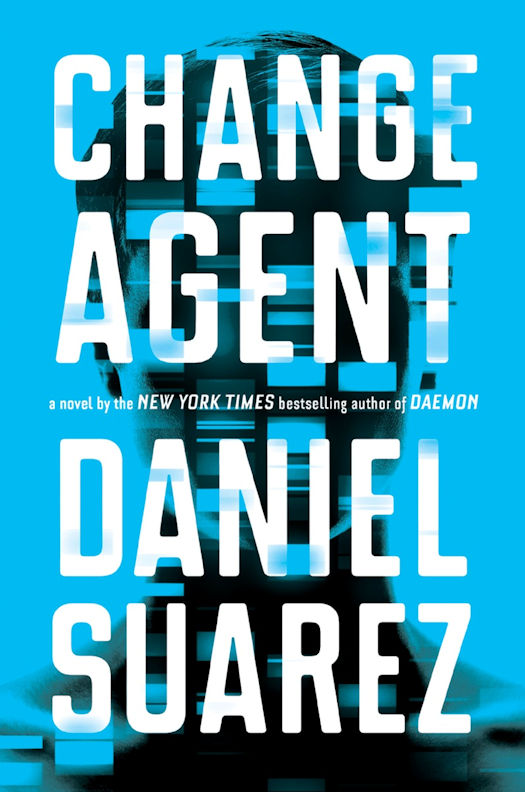 On a crowded train platform, Interpol agent Kenneth Durand feels the sting of a needle—and his transformation begins…

In 2045 Kenneth Durand leads Interpol’s most effective team against genetic crime, hunting down black market labs that perform “vanity edits” on human embryos for a price. These illegal procedures augment embryos in ways that are rapidly accelerating human evolution—preying on human-trafficking victims to experiment and advance their technology.

With the worlds of genetic crime and human trafficking converging, Durand and his fellow Interpol agents discover that one figure looms behind it all: Marcus Demang Wyckes, leader of a powerful and sophisticated cartel known as the Huli jing.

But the Huli jing have identified Durand, too. After being forcibly dosed with a radical new change agent, Durand wakes from a coma weeks later to find he’s been genetically transformed into someone else—his most wanted suspect: Wyckes.

Now a fugitive, pursued through the genetic underworld by his former colleagues and the police, Durand is determined to restore his original DNA by locating the source of the mysterious—and highly valuable—change agent. But Durand hasn’t anticipated just how difficult locating his enemy will be. With the technology to genetically edit the living, Wyckes and his Huli jing could be anyone and everyone—and they have plans to undermine identity itself.

DANIEL SUAREZ is a New York Times bestselling author whose books include Daemon, Freedom™, Kill Decision, Influx, and Change Agent. A former systems consultant to Fortune 1000 companies, he has designed and developed software for the defense, finance, and entertainment industries. With a lifelong interest in both IT systems and creative writing, his high-tech and sci-fi thrillers focus on technology-driven change. Suarez is a past speaker at TED Global, MIT Media Lab, and the Long Now Foundation, among many others. Self-taught in software development, he is a graduate from the University of Delaware with a BA in English Literature. An avid PC and console gamer, his own world-building skills were bolstered through years as a pen-and-paper role-playing game moderator. He lives in Los Angeles, California.