What's Up for the Debut Author Challenge Authors, Part 17 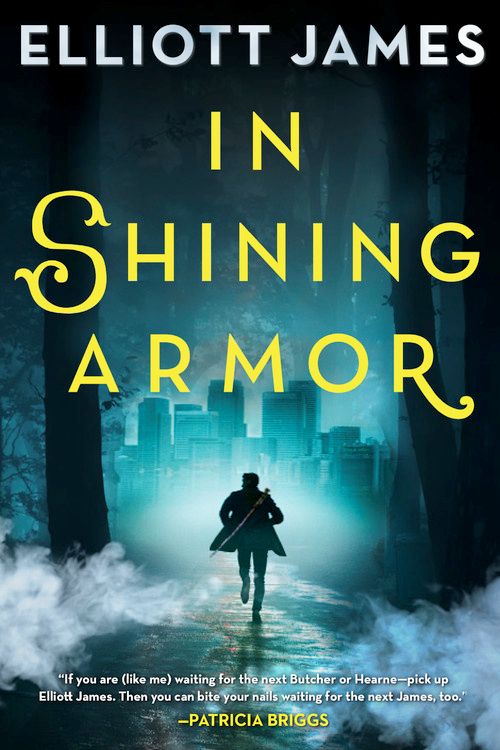 This fairy godmother's got claws.

When someone kidnaps the last surviving descendant of the Grandmaster of the Knights Templar, it's bad news. When the baby is the key to the tenuous alliance between a large werewolf pack and the knights, it's even worse news. They're at each other's throats before they've even begun to look for baby Constance.

But whoever kidnapped Constance didn't count on one thing: she's also the goddaughter of John Charming. Modern-day descendant of a long line of famous dragon slayers, witch finders, and wrong righters. John may not have any experience being a parent, but someone is about to find out that he can be one mean mother...

IN SHINING ARMOR is the fourth novel in a series which gives a new twist to the Prince Charming tale. The first three novels are Charming, Daring, & Fearless. 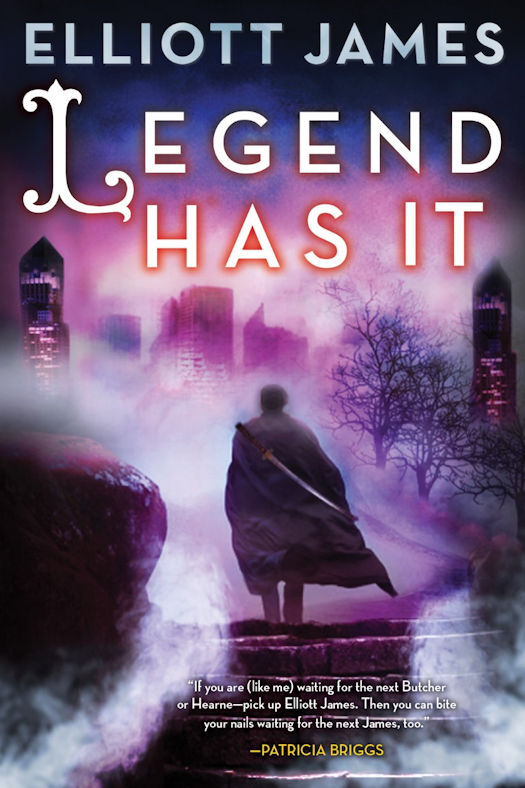 LEGEND HAS IT is the fifth novel in a series which gives a new twist to the Prince Charming tale. The first four novels are Charming, Daring, Fearless & In Shining Armor.

Read more about this novel at Orbit's Cover Launch. 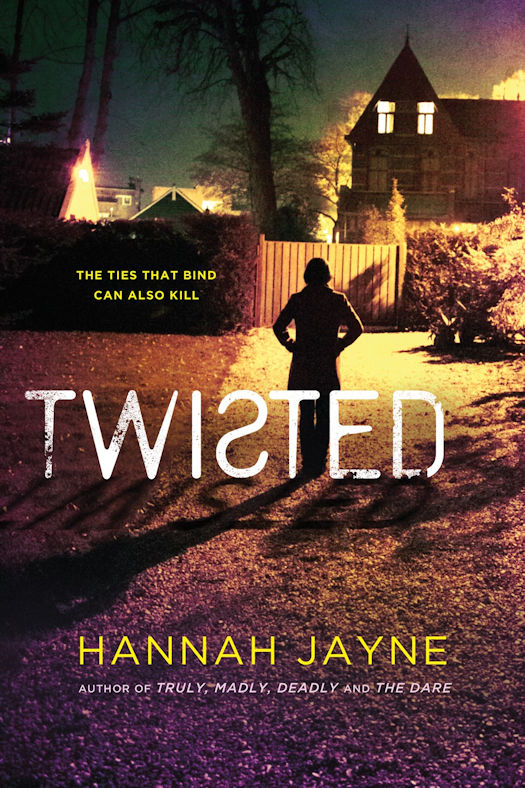 Bex has always been her daddy’s little girl. After her mother left, it was just the two of them. Sure he spoiled her with clothes and jewelry, but what father doesn’t dote on his daughter?

Except Bex’s dad is alleged to be a notorious serial killer. Dubbed "The Wife Collector" by the press, her father disappeared before he could stand trial. And Bex was left to deal with the taunts and rumors. Foster care is her one chance at starting over, starting fresh.

But Bex's old life isn't ready to let her go. When bodies start turning up in her new hometown, the police want to use her as bait to bring her father in for questioning. Is Bex trapping a serial killer or endangering an innocent man? 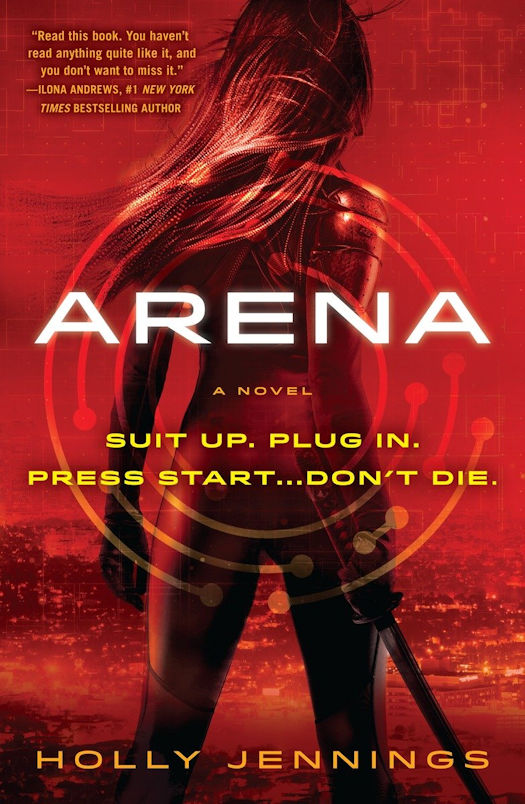 Every week, Kali Ling fights to the death on national TV. She’s died hundreds of times. And it never gets easier…

The RAGE tournaments—the Virtual Gaming League’s elite competition where the best gamers in the world compete in a fight to the digital death. Every kill is broadcast to millions. Every player leads a life of ultimate fame, responsible only for entertaining the masses.

And though their weapons and armor are digital, the pain is real.

Chosen to be the first female captain in RAGE tournament history, Kali Ling is at the top of the world—until one of her teammates overdoses. Now she’s stuck trying to work with a hostile new teammate who’s far more distracting than he should be.

Between internal tensions and external pressures, Kali is on the brink of breaking. To change her life, she’ll need to change the game. And the only way to revolutionize an industry as shadowy as the VGL is to fight from the inside… 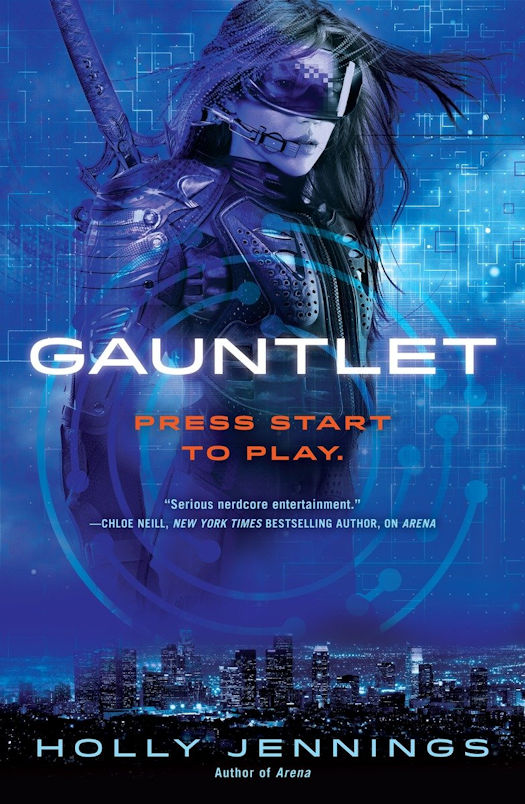 Plug back into the dangerous world of virtual gaming, in the next thrilling novel from the author of Arena.

Kali Ling has faced down death hundreds of times for the entertainment of millions. She knows fear—and she knows what’s truly terrifying…

There’s a new game in town. A brutal, winner-takes-all, international video game tournament showcasing the world’s most elite players, promising fame, prestige, and unbelievable fortune. But there’s a catch. The game uses new VR pods guaranteed to push digital warriors to their physical and psychological brink—adapting every time a gamer makes a move.

As the first female captain and youngest team owner in VGL history, Kali is used to defying the odds. But as the all-star tournament heats up, her determination begins to waver and the pressures of media, sponsors, and the game itself begin to put cracks in her hard-set convictions—and strain on her relationship with the one person who matters most.

If Kali and her teammates are to survive, they’ll have to find a way to be stronger than ever before. But battling the system may prove too difficult for even the most hardened of fighters… 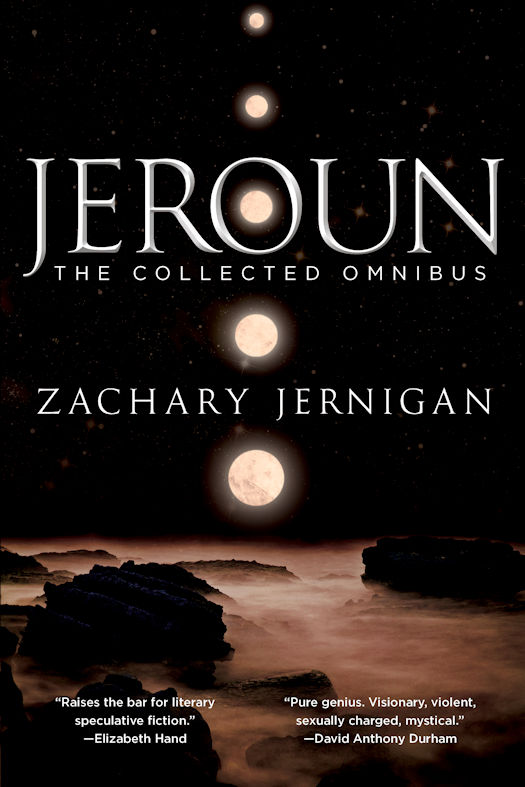 The Needle extends over the heads of all who live upon Jeroun. Composed of iron spheres massive enough to affect the tides, it is the god Adrash’s ultimatum to the people on the planet below:

Prove yourselves worthy, or be destroyed.

Vedas is a member of the Black Suits, an order of men and women who show their opposition to Adrash by staging battles in the streets. After witnessing the death of a child in his care, knowing himself to be responsible, he sets off on a journey to the decennial fighting tournament in Danoor.
Traveling with him across the continent are Churls, a mercenary haunted by the ghost of her daughter, and Berun, a constructed man possessed by the soul of his creator. Both come to understand that Vedas’s victory would start an all-out religious war.

Unbeknownst to these three travelers, the aristocratic outbound mage Ebn and her protégé Pol use powerful alchemy to travel into space. Their plan: engage Adrash in ways that threaten to bring the god’s wrath down upon the world.

Meanwhile, one of the world’s deepest secrets is gradually revealed. A madman, insisting he is the link to an ancient world, a pantheon of forgotten gods, offers the most tempting lie of all…

Jeroun collects the two novels No Return and Shower of Stones in a single new omnibus edition. Together these works combine the mythic inventiveness of early Roger Zelazny and Samuel R. Delany, the dark weirdness of China Mieville, and the dramatic scope of George R. R. Martin, creating a literary science fiction epic that defies easy categorization, resulting in one of the most critically acclaimed narratives of recent years. 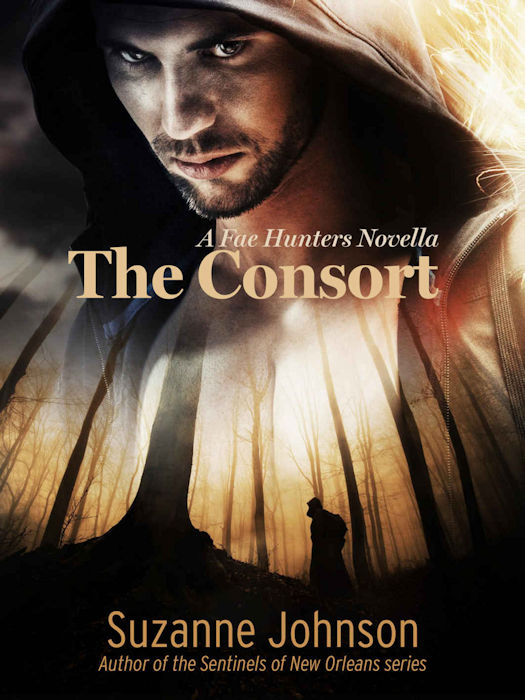 Summoned to the Royal Palace of Faerie, Liandra arrives full of hope—only to learn that Florian, the Summer Prince, has purchased her as his annual consort. The price charged by her father? A horse.

Fleeing through the veil into the human world, Liandra knows she must not only escape the prince but also the fabled Fae Hunters, ruthless faery warriors whose job it was to track escaped members of the fae and return them to Faerie dead or alive.

Falconer, eldest son of Autumn, gave up his seat on the throne of the Autumn Court to become Captain of the Fae Hunters. Setting up his base in New Orleans, Faulkner—as he now calls himself—runs The Hunt Club, a fantasy nightclub that makes the most of the fae’s illusion magic and serves as a hangout for off-duty Hunters. All is going well…until Prince Florian stalks in, demanding the return of his lost consort.

Faulk takes the case, but soon finds his duty at odds with his heart when he’s ordered to capture Liandra, the grown-up version of a shy, awkward girl he remembers from his youth. Can Faulk turn Lia over to a certain death at the hands of the prince, or will he risk a war with Faerie in order to save her?

From the author of the award-winning Sentinels of New Orleans urban fantasy and Penton Legacy paranormal romance series comes the first in a new novella series, The Fae Hunters. 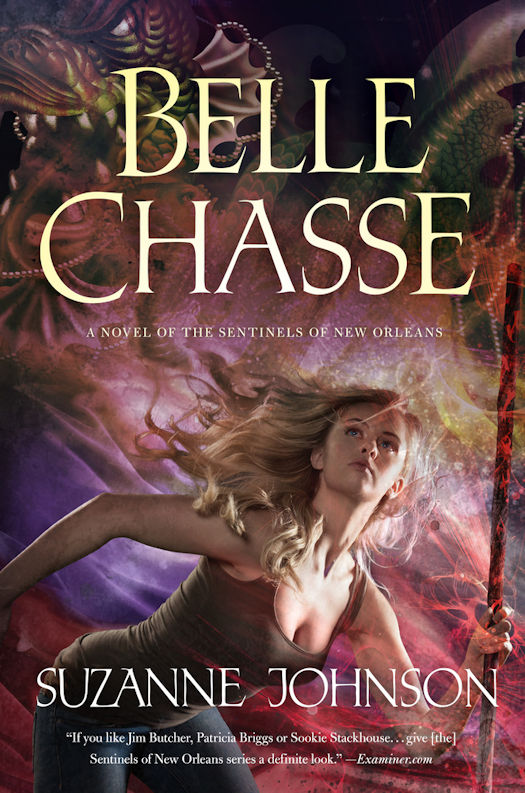 With the wizard-elven treaty on the verge of collapse, the preternatural world stands on the brink of war. Unless former wizard sentinel DJ Jaco manages to keep the elven leader, Quince Randolph, focused on peace and not personal matters.

With no one on the throne, Faerie is in chaos, with rival princes battling for power. The still-undead pirate, Jean Lafitte, is building his own army of misfits, and DJ—stripped of her job and hiding in the Beyond to avoid the death sentence handed down by the wizard Council of Elders—can’t get anywhere near her beloved New Orleans or her significant something-or-other, Alex.

It's time to choose sides. Friends will become enemies, enemies will become allies, and not everyone will survive. DJ and her friends will learn a hard lesson: sometimes, even the ultimate sacrifice isn’t enough. 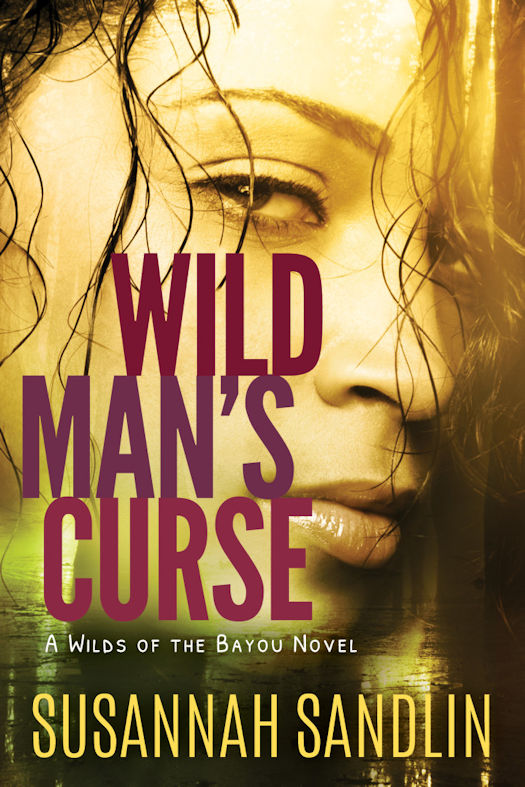 The bones said death was comin’, and the bones never lied.

While on an early morning patrol in the swamps of Whiskey Bayou, Louisiana wildlife agent Gentry Broussard spots a man leaving the home of voodoo priestess Eva Savoie—a man who bears a startling resemblance to his brother, whom Gentry thought he had killed during a drug raid three years earlier. Shaken, the agent enters Eva’s cabin and makes a bloody discovery: the old woman has been brutally murdered.

With no jurisdiction over the case, he’s forced to leave the investigation to the local sheriff, until Eva’s beautiful heir, Celestine, receives a series of gruesome threats. As Gentry’s involvement deepens and more victims turn up, can he untangle the secrets behind Eva’s murder and protect Celestine from the same fate? Or will an old family curse finally have its way?

From award-winning author Susannah Sandlin comes the first book in the Wilds of the Bayou series. 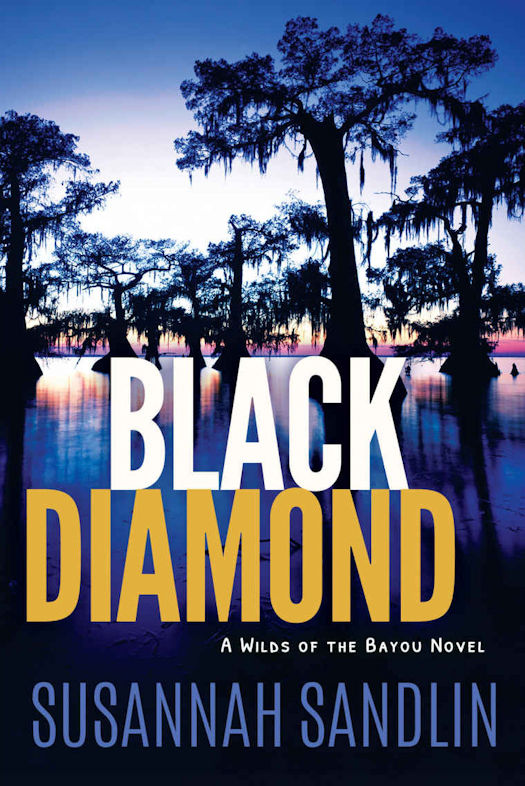 For some people, the untamed beauty of the bayou is a place to hide. For Louisiana wildlife agent Jena Sinclair, it’s a place of refuge—one where she can almost forget the tragedy that scarred both her skin and her soul. But when the remains of yet another fisherman turn up, Jena realizes that Bayou Pointe-aux-Chenes is not safe for her…or anyone else.

The mysterious deaths aren’t her only problem. A dangerous drug known as Black Diamond is circulating through Terrebonne Parish, turning addicts into unpredictable sociopaths. Jena’s investigation leads her to Cole Ryan—a handsome, wary recluse struggling with his own troubled history—who knows more than he’s willing to admit. If they want to stop the killer, Jena and Cole must step out of the shadows of their pasts and learn to help each other…before the evils lurking in the bayou consume them both.

From award-winning author Susannah Sandlin comes the second book in the Wilds of the Bayou series.