Please welcome Amber Bird to The Qwillery. Peace Fire, the 1st novel in the Peaceforger series, was published on October 11th by Barycentre Press. 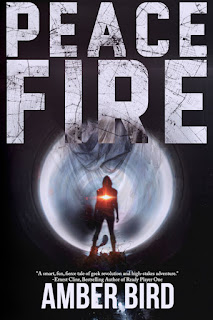 I started writing when I was 5 or 6 years old. At that age, it was just little short stories, flash fiction length, about whatever happened in my imagination that day. A couple years later, when writing stories with spelling test words was a regular assignment, I saw others’ stories and realized that maybe the stuff in my head wasn’t like everyone else’s. That was exciting and made me feel special in a time where I was starting to suspect there wasn’t anything special about me. After that, I kept writing.

AB:  Hybrid-ish. I basically tell myself the story a million times in my head, then write it out and see what happens. It’s only after that that I use a plotting system my buddy Nathan Long taught me to see what needs help.

AB:  Knowing which beta reader feedback to pay attention to. I had some great, critical readers, almost all of whom are also writers. When their notes contradicted each other, I was frozen for a while. And then, when I decided whose notes to disregard, I worried that they’d feel insulted. Most challenging and least fun.

AB:  My brain is a noisy place, constantly collecting all sorts of input. When it throws a story at me, I might not even know where it came from. I’m probably influenced by everything. Which seems like an unsatisfactory answer, so I’ll mention that reading Ntozake Shange’s Sassafrass, Cypress & Indigo made me really adore moments when prose feels poetic. I look for moments to do that in my writing.

As for music...My earliest imaginings were soundtracked by the music that was always on in our home, and, as a wee toddler, Ziggy Stardust forever linked music and sci-fi in my head. Music won’t give me the plots, but what I’m listening to can impact the way a story unfolds in my head during the imagination phase (the first mental draft of Peace Fire was more like a music video to a mix CD) and can influence what comes out when I’m typing things up. I have to choose my writing playlists carefully, lest I accidentally kill off someone or end up writing a sex scene that was originally planned to be “fall to bed, fade to black.” Plus, when I had some scenes come up that I wasn’t in the mood for, I just put on the music that should be their soundtrack and, like magic, my brain couldn’t wait to write.

AB:  If you're going to blow up a building in 2050, make sure it doesn't matter to any idealistic Seattle hackers. Cyber crusaders in pursuit!

TQ:  Tell us something about Peace Fire that is not found in the book description.

AB:  Oh, this is hard to answer without feeling spoiler-y. The thing that most early readers commented on (that wasn’t spoilerific) was that, whilst it’s not a silly book or a comedy, the point-of-view character’s sense of humor came through well and had them snickering regularly. I guess the “everything is grey” back blurb doesn’t really communicate that.

TQ:  What inspired you to write Peace Fire? What appeals to you about writing Cyberpunk? What is Cyberpunk?

AB:  Though I couldn’t tell you why now, in spite of having recently re-read it, Fool’s Run by Patricia A. McKillip left me with an image that became Katja’s living room. I found myself wondering who sat on that couch, and it all sort of crept in from there. I’d say other inspirations include my experiences (good and bad) with “found families” (those groups of friends who are more than just friends), my lingering regret that I never got to follow my childhood dream of being a hacker, and the powerful inspiration of being given a tight deadline. (thanks, Ernie Cline).

I think that, when I started writing and until I started getting good feedback, I specifically chose not to think of this as Cyberpunk. That instinct was reinforced by my experience making music, which showed me that choosing a genre can limit an artist. But, now that it’s out and I’m seeing people compare it positively to Cyberpunk books I enjoy...I think the appeal is that there’s plenty of room for heroes who aren’t sterling and pure, for exploring the near-future ramifications of our current approaches to things, and the general grittiness of the world.

I kind of want to just Google “Cyberpunk” and quote that, but I’ll risk the ire of other Cyberpunk fans and talk about what it is to me. To me, the best manifestation of it is near-ish future, gritty and a little dark, and explores the relationship between humans and technology. With that last one, I like it to focus on how tech in us or on us impacts our lives and/or humanity.

TQ:  Do you have any favorite Cyberpunk novels?

AB:  I’m really bad at favourites. So, I’ll mention three noteworthy novels in my Cyberpunk journey. The first—my own first experience with Cyberpunk—is actually a short story collection, Mirror Shades, which was edited by Bruce Sterling. Somehow, that fell into my hands before either Neuromancer or Burning Chrome (by William Gibson), though those came immediately after. It was actually perfect as a primer and as a list of other authors to read. The second is Snow Crash by Neal Stephenson. I was instantly hooked and couldn’t put it down. If you haven’t read it, I suggest you replicate my experience by not reading anything about it—including not reading the description of it—before you read it. I suspect that’s part of why the opening scene got me. Finally, there’s this book called Bad Voltage by French author Jonathan Littell. It’s Cyberpunk in Paris and I think that was part of the appeal for me. I don’t know that it’s mind-blowing or breaks new ground, but it taught me my first French swear word and helped me see Cyberpunk as more than just the U.S. and Japan.

TQ:  What sort of research did you do for Peace Fire?

AB:  My research was pretty light. Most of it was stuff like making sure that I still remembered some things about hacking, that I made a mindful choice for Riley’s gender-neutral pronouns, and that I correctly remembered some things about South Dakota. I did have a beta reader who knows quite a bit about guns, so some of his feedback sent me researching related things. Oh, and there was a little research into explosives. After the gun and explosives searches, I made sure to do one of those “Dear NSA, if you are watching my searches, I swear I’m just a writer” tweets.

TQ:  In Peace Fire who was the easiest character to write and why? The hardest and why?

AB:  I’ve spent so many years with them in my head, that I felt like I really knew the main trio of friends. Though, as a geeky, bisexual female like me, I probably felt like Katja was the easiest to write. The hardest was Detective Engalls. Sometimes, it’s very easy for me to see all cops negatively based on the way some of them act (even though I’ve known good cops). Writing a cop who wasn’t actually just abusing his power or being a complete jerk meant I had to constantly be on guard against my own anger at current events and the attitude that engenders in me.

AB:  I feel like speculative fiction gives us the chance to address social issues in a way that might be more palatable, that might help people read and consider without our knee-jerk reflexes shutting things down entirely. To some extent, I feel we have a responsibility to do that if it doesn’t “ruin” our story. I didn’t want to make my story all about social issues, but just writing about people who are like those I know, refusing to stick to so-called default characters, felt like an honest way to bring up some things. And I don’t think you can talk about the near future without rubbing up against where some of our current situations might have us heading. So readers might certainly get some ideas about my feelings on a few issues.

TQ:  Which question about Peace Fire do you wish someone would ask? Ask it and answer it!

AB:  Oh, I kept imagining people asking me which character I’m most like and expecting me to say Katja, the cool protagonist. The ridiculous truth is that her grandmother is probably most like me. If I’d had a screw up kid who had a pretty cool daughter, I’d probably be Gran. Though she’s braver than I am.

TQ:  Give us one or two of your favorite non-spoilery quotes from Peace Fire.

1. That might explain their excessive heavy-handedness when they swabbed me and my clothing looking for…I don’t know. Maybe traces of explosives? Tell-tale particulates? Or maybe it was an approved form of torture to aggressively wipe me into a confession.

2. Me, I just felt raw and really disappointed to discover I wasn’t superhuman.

AB:  Well, I’m already working on draft two of the sequel to Peace Fire, so I’m hoping to have that out in late 2017 or early 2018. I don’t think my brain will let me work on anything else until that’s done, unless it’s shorter, like a poem or lyrics.

AB:  Thanks so much for having me! 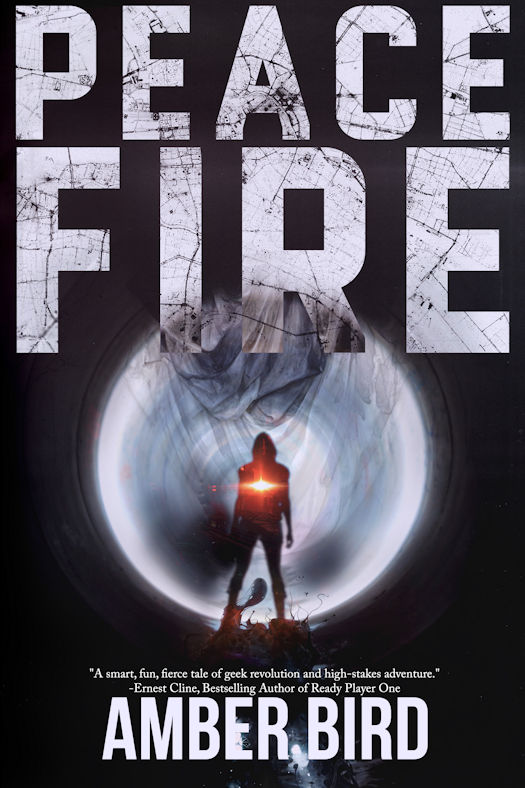 In 2050, the world is a little denser, a little greyer, and a little more firmly under the corporate thumb. Wriggling carefully under that thumb, in their dimly lit flats, Katja and her friends have tended to walk the fine line between cyber criminals and cyber crusaders. For them, no physical reality compares to their lives built on lines of aggressive code.

But then somebody blows up the office where Katja is pretending to be a well-behaved wage slave and jolts them into the concrete and clouds of corporeal Seattle. Of brains infiltrated by a clandestine threat.

Can a handful of digital warriors win a war that stretches into the world on the flesh and blood side of their computer screens? 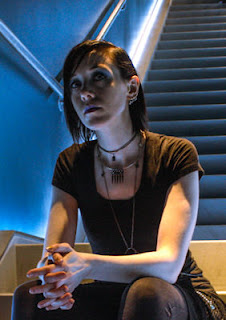 Amber Bird is a writer, a rockstar, and a scifi girl. She is the author of the Peaceforger books, the front of post-punk/post-glam band Varnish, and an unabashed geek. An autistic introvert who found that music, books, and gaming saved her in many ways throughout her life, she writes (books, poems, lyrics, blogs) and makes music in hopes of adding to someone else's escape or rescue. And, yes, she was on that Magic card.