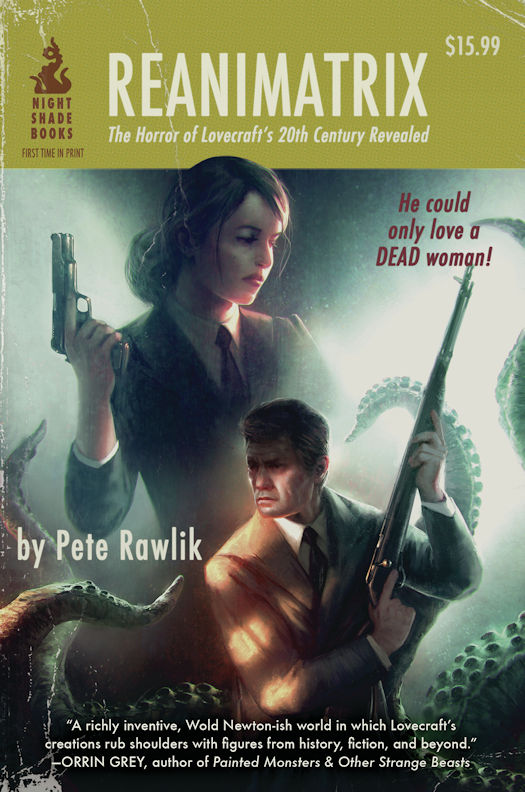 An obsessed detective on the trail on a murdered young woman finds more than he bargained for in this tale of hard-boiled cosmic horror, an inventive mash-up of the pulp detective story and Lovecraftian terror.

Some say the war drove Robert Peaslee mad. Others suggest that given what happened to his father, madness was inevitable. He’s spent years trying to forget the monsters that haunt his dreams, but now has returned to witch-haunted Arkham to do the only job that he’s qualified for, handling the crimes other cops would prefer to never talk about. He’s the hero Arkham doesn’t even know it has.

Megan Halsey is dead, her body missing. She might have been one of the richest young women in Arkham, but all that money couldn’t make her happy. Word on the street is that her mother split a long time ago, and Megan had spent a lot of her money trying to find her.

Peaslee soon becomes obsessed with the murdered Megan. Retracing the steps of her own investigation, traveling from Arkham to Dunwich, and even to the outskirts of Innsmouth, he will learn more about Megan and Arkham than he should, and discover things about himself that he’d tried to bury.

It’s 1928, and in the Miskatonic River Valley, women give birth to monsters and gods walk the hills. Robert Peaslee will soon learn the hard way that some things are better left undead.

Reanimatrix is a genre-blending thrill ride. Pete Rawlik mixed Lovecraft with pulp fiction detective mystery with romance. It's post World War I and the two main characters are Robert Peaslee and Megan Halsey. They both grew up in Arkham, Mass. Robert was in the war, where he saw his first signs of otherworldly power. After the war he spent time as an agent traveling Europe. It's here he hears about Megan's murder and decides to make his way back home to solve her murder, only to find true madness and evil.

Rawlik does a wonderful job of grabbing you and immersing you into his world. It's a true pleasure to read. For those of you familiar with Lovecraft, you'll be rewarded as well as other literary characters that pop in and out of the storyline. I won't ruin the surprise of who makes appearances, but I'm confident even I missed some of them. One major aspect of the story revolves around the reanimated dead. I have to say I really like the way Rawlik handles this as it felt like a truly fresh take.

Rawlik chose to write his story in the format of letters written by Robert and Megan, giving the reader immediate understanding of the two main characters and their inner workings. The only downfall is you can't completely trust the representation of other characters as they are filtered through the eyes of Robert and Megan.

My only real complaint is the writing style and narrative choice. It's a lot harder for me to get truly sucked into First Person Narratives and then the added choice of Letters to convey the story slows things down for me.

Reanimatrix is a unique take on genre blending that worked out better than I could have hoped for. Rawlik brought a fresh perspective on some familiar tropes. I can say you'll be glad you picked up this book. There is violence and minor adult themes. I'd recommend it to teens and adults. There are so many different genres covered in this book with other fun literary easter eggs, anyone that likes to read will find something to enjoy.