Please welcome Nik Abnett to The Qwillery. Savant was published on October 4th by Solaris. 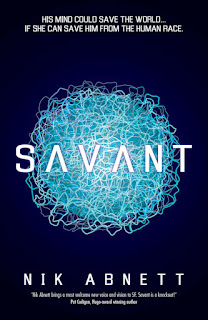 Nik Abnett:  I started writing as a child. When I was nine or ten, I wrote a play, which was performed at my school for the students and parents. I thought nothing of it at the time. Now, I’m very grateful to a teacher who did a wonderful thing.

I’m not sure there is a ‘why’ for me, so much as there is simply a compulsion to tell stories.

NA:  By nature, I’m definitely a pantser. I regularly begin a piece of work with only an idea for a theme. I don’t plot or writer character sheets. I like that what comes before in the writing informs what comes later. I love the evolution of ideas over time. If I plotted a novel at the outset, I’d have to have all my ideas in one go.

NA:  The biggest challenge is getting through the first third of a novel. I read everything I’ve written every day and make a lot of changes as the ideas evolve, so it’s time-consuming and even a little laborious at times. It can also be the most exciting part of the process.

NA:  Savant: But for one man, the World could end… But for one woman, the man could crumble. Will the authorities allow her to do her job?

TQ:  Tell us something about Savant that is not found in the book description.

NA:  The reader will probably never know or understand everything.

TQ:  What inspired you to write Savant? What appeals to you about writing Science Fiction?

NA:  Inspiration’s a funny thing. I’d wanted to write a book about unconditional love for a long time (OK this novel didn’t turn out to be about that, but that’s why I like the evolution process). I knew that if I wrote this novel straight it could sound terribly righteous, and I hate a proselytising tone in fiction. Writing this as an SF novel simply gave me more freedom to explore the themes. SF is a great medium for all kinds of ideas; it allows vast scope.

The immediate inspiration was reading someone else’s work. A friend of mine wrote a novel, which was published. I bought a copy, got it signed and began to read. The novel and its sequels have done well, but this just wasn’t my cup of tea. I decided that it was time I wrote the kind of SF that I wanted to read. It was as simple as that. I began writing there and then.

TQ:  What sort of research did you do for Savant?

NA:  I’m somewhat familiar with Autism and I took an A’level in Maths at school. I needed to re-familiarise myself in both areas, but I didn’t have to begin with first principles, which made research easier than it might otherwise have been. A friend of mine with a seriously autistic child also beta-read for me, for which I am incredibly grateful.

I try to follow the precept that if you can’t answer a research question on a post-it note, you’re probably asking the wrong question. I like to weight my time in favour of writing.

TQ:  In Savant who was the easiest character to write and why? The hardest and why?

NA:  I think the easiest characters to write are often the ones we like the most, and I liked all of my central characters. I anticipated finding Tobe difficult to write, because he is Other, but I actually found his voice very quickly. I really loved writing Bob Goodman, who, in some ways is the most human character; he’s warm and funny, and his reactions feel real to me. Pitu 3 was quite difficult to write, because his value in the society is so slight. Balancing his personality with the pathos of his existence wasn’t easy, and I hope I got it right.

NA:  I think any time I write about characters and their relationships there is almost bound to be some connection to society as a whole. I don’t mind admitting that I’m quite a political person. I tend to the left, and I’m a feminist. We all live in an imperfect society, and I think it’s natural to comment on that.

TQ:  Which question about Savant do you wish someone would ask? Ask it and answer it!

NA:  I imagine every writer will answer this question the same way.

The question I’d most like to be asked is, ‘Will there be a sequel?’

The answer is, ‘I’ve already begun a companion novel, working title ‘Seekers’, set in the same universe, but on the other side of the shield… On the outside.

TQ:  Give us one or two of your favorite non-spoilery quotes from Savant.

NA:  I think my favourite quote is probably, “It is the same.” It’s something Tobe says often, and it’s central to the novel; it’s like a mantra. I agonised long and hard over the formality of the phrase, but simply couldn’t use the contraction in the end.

On the whole, this probably isn’t a terribly quotable book; it’s very much, I hope, an entire experience.

NA:  Next for me is my first… no… second play. I wrote ‘Ward’ for my daughter to direct, and you can see it in Canterbury on the 28th and 29th of November. It’s a marriage of my writing with my daughter’s flair for physical theatre, and I’m very excited about it.

Of course, I’m working on ‘Seekers’, and I’m cowriting narrative for a computer game with my husband, Dan Abnett, which is yet to be announced.

NA:  Thank you very much for having me. 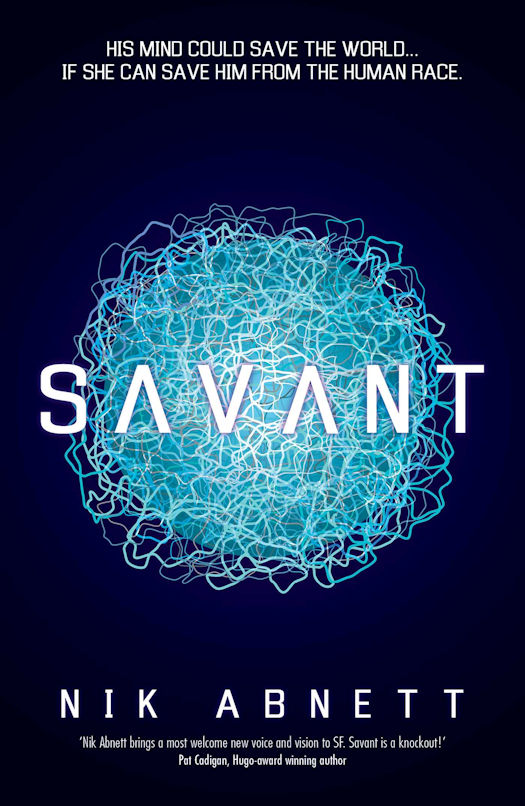 His mind can save the world, if she can save him from the human race...

The Shield is Earth's only defence. Rendering the planet invisible from space, it keeps humanity safe from alien invasion. The Actives maintain the shield - no one is sure how - but without them, the Shield cannot function.

When an Active called Tobe finds himself caught in a probability loop, the Shield is compromised. Soon, Tobe's malady spreads among the Active. Earth becomes vulnerable.

Tobe’s assistant, Metoo, is only interested in his wellbeing. Earth security’s paramount concern is the preservation of the Shield. As Metoo strives to prevent Tobe’s masters from undermining his fragile equilibrium, the global danger escalates.

The Shield must be maintained at all costs... 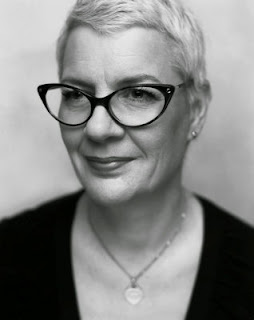 Nik Abnett has published work in a number of mediums, including advertising, training manuals, comics and short stories. She has worked as a ghost writer, is a frequent contributor to Black Library Publishing, and regularly collaborates with her partner, novelist and comic author Dan Abnett. In 2012 she was runner-up for the inaugural Mslexia novel-writing competition. Savant is her first solo, independent full-length work of fiction and publishes summer 2016.