Artisan's Avenue is a place to showcase fantasy, horror, or sci-fi artists and their creations. As you may have guessed, the name pays homage to Artist's Alley and the wildly talented people I've met at various comic cons. I am continuously fascinated and impressed with their creativity and imagination and I hope our readers feel the same. 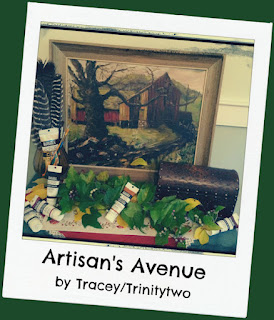 The Qwillery would like to welcome David Thorn Wenzel, an amazing artist who is well-known for his work on The Hobbit graphic novel. I first met David at TerrifiCon and later at NYCC back in 2015. I became enchanted with his art and believe The Qwillery's readers will be as well. David was gracious enough to invite me to his beautiful home and the following is a portion of our conversation/interview. 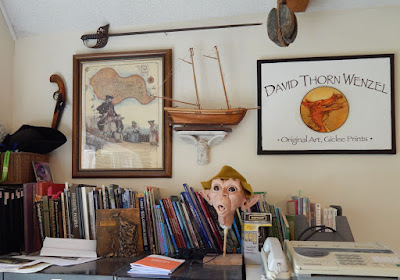 Tracey Maknis:  David, welcome to The Qwillery. Did you get started drawing as a child?

David Thorn Wenzel: It's interesting. I think art for many people starts really early and it did with me. I know when I was 5 or 6 years old I was actually making up my own cartoon characters and making comic strips about them. I just loved to draw right from that time. I always was drawing.

TM:  Did you have someone in your family who influenced you?

DTW:  No, I think it was basically television. (Laughter) No, the earliest remembrances I have of actually doing art was in second grade. I drew a picture of a skin diver with a shark going around it with bubbles going up. Now, I didn't know anything about artistic development; children of that age tend to do (drawings) side by side, and to have something overlap and twist around is pretty perceptive. They brought the principal in and I was like 'What? It's just a drawing.'

TM:  So then through high school you continued to do art?

DTW:  I went to college, I went to Hartford Art School.

So what happened in art school, I was not the best student in my class at all. I didn't really emerge in college right away. And what happened, believe it or not, is I read The Hobbit. And when I read The Hobbit it sort of blended the idea of what I wanted to do in art school with the pen and ink. At that point there were no drawings of The Hobbit out there. It shocked me. We are in a world where we feel like, 'Oh my gosh, I wish this could have existed.' It was a place you could really go in your mind and think you were going someplace that was different than the place that you lived. And of course it touched on the edges of our own history. So anyway, when I found The Hobbit I did all J.R.R. Tolkien drawings for my senior project, which is what inevitably jump started my illustration career.

TM:  How did you get into the industry? 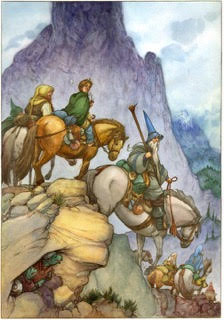 DTW:  Back when I got out of college, I had three things that got me work. I put my work in one of the first comics stores out there, in Simsbury, CT. At the same time comic conventions were starting, so I started bringing my stuff down. And I also met an illustrator who lived in Westport who helped me meet some people. I started making cold calls. And in those days you could go to Marvel comics and bring your portfolio and they would look at it. It was pretty awesome; you'd have people that you knew, I think John Romita looked at my portfolio and so it was pretty cool.

But with those little threads - a publisher came in to the comic shop and saw The Hobbit drawings that I had done. They were upgraded from college but he saw those drawings and he wanted to publish a book. And that is how Middle Earth: The World of Tolkien (Illustrated- 1977) got out there. And I'm in my mid twenties at this point, so this is a big deal.

And then I started getting work from Marvel. I was in what they called the British group. Comics in England came out as weeklies. So Marvel would take a book and break it into two or three sections and they would need new splash pages for every break. So that's how they would train us. They would have us do tons of splash pages for all these different books and that's how I started in comics.

TM:  How did you get into children's books?

TM:  How many children books have you done?

TM:  If you had to choose between comics and children's books?

TM:  So for The Hobbit you did the whole nuts to bolts? 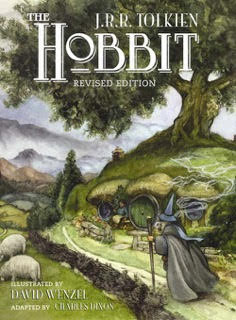 DTW:  What happened somewhat in the spread between when I left comics and started doing children's books is that the idea of the graphic novel came in and comics started to use full color process which they had not done up until that point. And so the first big full color comic I did was for Joe Orlando called Warlords. It wasn't the Warlords that Mike Grell did for years; it was attached to an Atari product. It was somewhat a Hobbit derivative. And that really established that I could ink and then do the full color painting over the inks. So that was one of the reasons I started to go back to comics. And of course in the years since then, well, they don't even do full colored painting anymore. Everybody does full colored digital finishes.

TM:  Not only are you inspired by Tolkien, you are inspired by history and fantasy in general. Can you enlarge on that idea?

DTW:  I like the whole idea that humans love to create myths for themselves. They create things that are beyond their imagination. Obviously religious people, the whole God thing, spirit thing. People throughout time have needed to have other worlds that they are not directly connected to but they believe in. When my kids were growing up we always told them there might be gnomes outside. Everybody loves that sort of...fantasy. Is there a Loch Ness Monster? I don't know, but how many TV shows have we spent looking for that and Big Foot? We all love the mysterious. Fantasy ties into that.

TM:  Is there something I haven't asked you? Something that you'd like our readers to know about?

DTW:  I would like to say that one aspect of my life that I am enjoying is teaching. I teach at Lyme College of Art. It is really interesting to be able to communicate with people who want to become artists. I have been teaching for 7 years. It's a very small school which is one of the reasons I wanted to teach there. You get really attached to your students and so it's really nice when they come back to talk to you. Some are working in design firms and different things. A lot of people want to do concept and fantasy art because it's huge. And it's just a struggle. I always tell them whatever you are looking at now, you've got to be looking for what the next wave is going to be.

TM:  What advice do you give your students? It's a hard industry/field.

DTW:  Art is a hard field to get into. Some of the venues that I used as a way to get in are no longer accessible. I could go into Marvel comics and they would look at my portfolio. I mean, that seemed like a logical thing to me. Now, I don't think you can do that anymore. I follow the track of this. My son Brendan is a book illustrator, and his career arc is heading up, but it took him ten years to really mold everything until he got to the point where he was going to get his first book. And I think that's the difference. I was able to go out of school and cobble together a career pretty quickly.

So what do I tell my students?

It's really difficult to catch on right away because there are so many people doing it now. I tell them that you have to keep drawing, you have to keep improving and you have to make contacts. You have to get yourself out there and figure out who's buying. 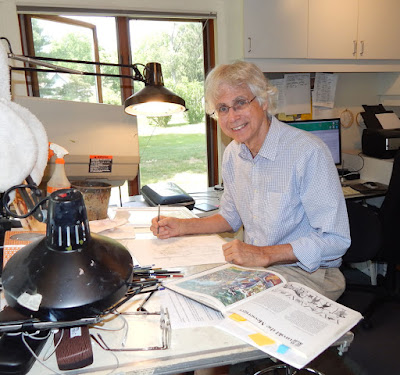 TM:  David, thank you very much for sharing your time and your talents with The Qwillery.

To find out more about David's work: 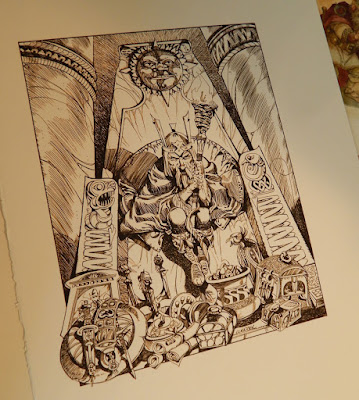 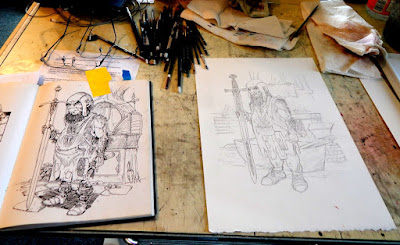 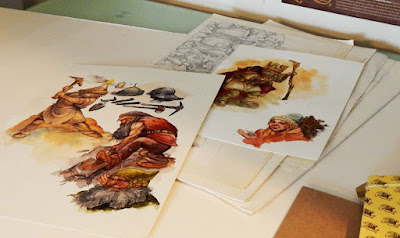