I'm a backer of Strange California: A Speculative Fiction Anthology on Kickstarter and am delighted to host Jaym Gates, one of the co-editors. I used to live in Los Angeles and would love to read this anthology, but that can only happen if the Kickstarter campaign is funded. Please take a look. You only have 4 days left to back Strange California! 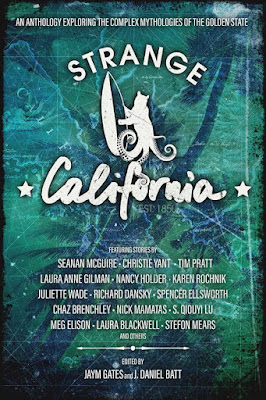 California is one of those places that takes a larger-than-life form in stories and memories. So many authors have drawn their inspiration from the state, creating a rich heritage of science fiction and fantasy in the Golden State.

When Jason Batt and I started talking about our shared experiences with the weird side of California, we immediately knew we wanted to work on an anthology inspired by our experiences.

A little less than a year later, Strange California went live on Kickstarter (https://www.kickstarter.com/projects/jasonbatt/strange-california-a-speculative-fiction-anthology). We’re now just a few days from the end of the campaign, and pushing hard for our full funding. This anthology developed out of our love for the complexity and diversity of the state–features reflected in both the landscape and the people that inhabit them. California sprawls across a multitude of landscapes and has amassed a history full of the strange and unusual. There are secrets in the desert. Secrets in the cities. Strange and unusual happenings in the odd, dark places of the coastal state.

We have an absolutely beautiful selection of stories put together for the readers with this project. I’ll let them speak about their own stories.


Tim Pratt: Lake Merritt -- "the jewel of Oakland," the nation's first official wildlife refuge, the largest body of salt water within city limits in the country, a misshapen Valentine heart three and a half miles around with a jogging path lit by fairy lights and acres of park all around -- has its own legendary lake cryptid (which almost nobody believes in), the "Oak-ness Monster." It's hard to imagine how an eight-foot-long sea serpent could go even a little bit unnoticed in a tidal lagoon that's only 10 feet deep... but in my story, I do the imagining for you.


Chaz Brenchley: Ever since I moved to Silicon Valley, coming on five years ago, I’ve wanted to write about it. I thought that would be a non-fiction book, which would certainly be called “Uncanny Valley”, in reference to that detectable revulsion people feel in contact with a robot that is almost but not quite human: the gulf between truth and artifice is never greater than when it is most narrow.

But I have a fine history of never writing my non-fictions (there is a whole other book called “State of Grace”, an intimate history of the Vatican, which I have never written nor ever will though I really really want to), and the title with the subject are too good to let run to waste, and short stories are a thing that I am known to do; and there is nowhere in California more weird than Silicon Valley. So I was thinking about that, and about how it used to be the Valley of Heart’s Delight when it was all fruit-orchards and nothing tech at all; and I thought how interesting it would be if a start-up built an app for people’s phones that would show them not the view they’re actually looking at but the way it used to be. (Two weeks later Pokemon Go launched, and suddenly everyone was using their phones to see things that aren’t actually there: but that’s blessedly irrelevant here.)

And once you’ve had the idea, there are really only two ways to go, hereabouts. Either you build the app (which is what everyone else in Silicon Valley would do), or else you write the story. Which is what I did, obviously.


Natania Barron: Being half Canadian and a Yankee, I can never say that the west is in my blood. But my father's side of the family has lived in California since the 70s, so from the youngest of ages I've been able to visit the Golden State. And from its arid deserts to the high reaching redwoods, it's always been tremendously inspiring.

The seeds for my story "Camellias" were planted during my time visiting my beloved late great aunt in Northern California and traveling together to the coast. We'd leave her house in Los Altos Hills and drive through the mountains and arrive at the sea, salt spray in our faces as we walked to the cliffs. Then we'd take a short drive to Pescadero, the little village nestled into the hills, and eat artichoke soup and crab sandwiches at Duarte's tavern.

For me, this part of California has always felt like the end of the world, in the best possible way, with ocean cliffs and farmlands, and green grass after the rainy season. When my great aunt was still healthy, we'd talk during the drive of our mutual love of Japanese and Native American art, and she'd tell me about her trips all around the world. I once asked her which country was her favorite and she said, without hesitation, "China."

So for Strange California I wanted to marry the sublime and wildly diverse landscapes of San Mateo County with a twist on the weird western. Not from the view of a cowboy or a brothel owner, but from the eyes of two young Chinese girls who unleash a powerful magic while working at a textile mill in San Francisco. When they fall in with three sisters escaping a dark past, it's not clear who's saving whom... from what.


Spencer German Ellsworth: The Mojave Desert is not meant for water. It's a landscape of rocks and sudden sand dunes and tons of twisted, weird Joshua trees, of flash floods and windstorms and dust devils.

So when you crest a barren hill, and see this giant artificial river rushing along concrete banks, it's the most otherworldly thing in an already otherworldly landscape. There was not much for a crop of teenagers to do in Lancaster, given that we were a bedroom community for Angelenos and the Air Force. We hiked around the aqueduct a lot, risking a swim in the artificial currents, trying to kill rattlesnakes, and crawling through drainage tunnels.

I originally wrote this story for an anthology of urban legends, and it was rejected because it was not so much an urban legend as just weird. Luckily, it found a home in Charles Coleman Finlay's first issue of F&SF. It's one of my few stories that is a kind of riff, a repeated study on that image of blue Sierra Nevada water transported thousands of miles along a concrete river in a blasted desert.


Nick Mamatas: My inspiration was a brief one: as someone who grew up Greek Orthodox, I am always interested in bits of Orthodoxy in North America, especially when they're not obvious. Few people outside of California give much thought to Russia's presence in the American West, which brought along with it traces of Orthodoxy. It's very strange, and so I thought I'd write about it.


Jim Van Pelt: I attended the U.C. Davis Creative Writing program from 1988-1990. In the summer of '89, after I'd spent the day painting a house, I drove north on U.S. 5 to relax. At sunset, I pulled into a rest stop to eat a peach. Across the fields and the day's dust stood a huge carnival tent and a half dozen rides. By that time the sun sat like a red ball on the horizon, casting an evocative light on the canvas and motionless banners. No one was at the carnival. None of the rides were moving. It was like a ghost carnival. I've never been able to shake the image, and that's what inspired "Roller Coaster."


Christie Yant: A few years ago, while researching the history of my home town, I came across a book by a local writer and historian John McReynolds, about the more than one hundred Japanese families who lived here until the internment of WW2, of which only two families ever returned. An entire community, completely erased. In my story I hope to explore and bring attention to that lost community through the lens of speculative fiction and historical fantasy.


Marion Deeds: Clearly Christina Rossetti’s poem “The Goblin Market” was a big influence on this story, but I have been fascinated since childhood with the influence of the Russian exploration of this stretch of coastline. Although it didn’t go well for the sea otters, it’s difficult to think of the Russian settlement and not include them. One day in late summer a friend and I went on a photo safari through the fields and valleys between the coast and the town of what is now Tomales. The old buildings in the town itself, the stretch of the golden valley, the humming of the wind and in particular an old barn on a hillside got into my head and would not leave, so I came up with a tale of two sisters, a magical mother and a trickster.


For more information on Strange California, and the Kickstarter, please visit us at https://www.kickstarter.com/projects/jasonbatt/strange-california-a-speculative-fiction-anthology, http://strangecalifornia.com/, or our recent Reddit AMA https://www.reddit.com/r/Fantasy/comments/58gzna/hi_rfantasy_were_the_editors_and_authors_of/. 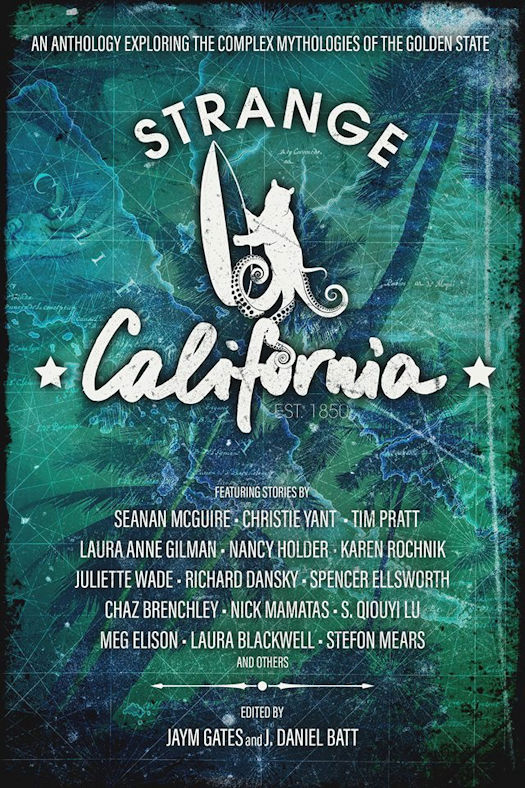 Jaym Gates got her start in editing by making a joke on Twitter six years ago. At the time of writing this bio, she's working on her 15th anthology. The titles include RIGOR AMORTIS, BROKEN TIME BLUES, WAR STORIES, GEEK LOVE, GENIUS LOCI, STRANGE CALIFORNIA, UPSIDE DOWN, ECLIPSE PHASE: AFTER THE FALL, EXALTED: TALES FROM THE AGE OF SORROWS, and VAMPIRE: ENDLESS AGES. She is also a developmental editor for Falstaff Books, and lead editor for the BROKEN CITIES shared-world setting.

Along the way, she's managed to publish fiction, RPGs, comics, nonfiction, and academic nonfiction. Her fiction has appeared in AETHER AGE, KAIJU RISING, HEROES!, Shadowrun: DRAWING DESTINY, Goldfish Grimm, and Grendelsong, and her nonfiction appears in various academic and online outlets. She has a collection of short fiction coming out from Falstaff Books, titled SHATTERED QUEEN. She has written for FIREFLY: SMUGGLER'S GUIDE TO THE RIM, BLUE ROSE 2nd Ed., TIANXIA: Blood, Silk, and Jade, and other RPGs.
In her spare time, Jaym trains and rides horses, collects tea, practices a martial art called Systema, and works in a comic shop in Everett, WA.