DARK HORSE ADAPTS “AMERICAN GODS” INTO COMIC BOOK AND GRAPHIC NOVEL FORMAT
Neil Gaiman’s award-winning novel to be adapted into comic series in 2017
MILWAUKIE, Ore., (October 5, 2016)—Today, Dark Horse is excited to announce the adaptation of American Gods into comic book form. Originally published in 2001 by William Morrow and Headline, American Gods is a Hugo and Nebula Award–winning novel by Neil Gaiman (How to Talk to Girls at Parties, The Sandman). North American rights were acquired from Gaiman’s literary agent, Merrilee Heifetz at Writers House. American Gods is the latest Gaiman adaptation from Dark Horse, preceded by graphic novel adaptations of How to Talk to Girls at Parties, Troll Bridge, Forbidden Brides, and many more. Starz will also premiere an American Gods TV show in spring 2017, adapted by Bryan Fuller (NBC's Hannibal, CBS’s Star Trek: Discovery).

American Gods creator Neil Gaiman explained his excitement for the upcoming American Gods adaptations: “There’s a tremendous amount of excitement, in my house and in the world, about the American Gods TV series coming up on Starz. What we’ve managed to keep a secret until now is that there is something just as exciting out there: American Gods, the comic. I’ve been watching P. Craig Russell breaking down the book into comic form, watching Scott Hampton painting the pages, watching Glenn Fabry create the covers, and grinning to myself with delight, because the American Gods comic is going to be an astonishing, faithful, and beautiful adaptation.”

American Gods: Shadows #1 finds Shadow Moon released from jail only to discover his wife has died. Broken and uncertain about his future, Shadow Moon meets the mysterious Mr. Wednesday, who employs him to serve as his bodyguard. This fateful decision thrusts Shadow into a deadly supernatural world where ghosts of the past come back from the dead, and a brewing war between old and new gods hits a boiling point.

Dark Horse will adapt American Gods into twenty-seven single issues with three story arcs: Shadows, My Ainsel, and The Moment of the Storm, to be collected into three hardcover graphic novels. The first issue of American Gods: Shadows goes on sale March 15, 2017. 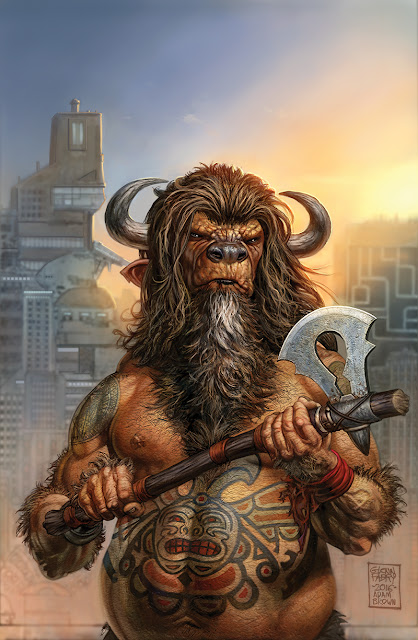 About Neil Gaiman
Neil Gaiman is the celebrated author of books, graphic novels, short stories, and films for readers of all ages.

Some of his most notable titles include the groundbreaking #1 New York Times bestselling Sandman comics series (which garnered nine Eisner Awards and the World Fantasy Award for Best Short Story); The Graveyard Book (the first book ever to win both the Newbery and Carnegie medals); American Gods (which will soon be released as a television show in the US); and The Ocean at the End of the Lane, the UK’s National Book Award 2013 Book of the Year.

The film adaptation of How to Talk to Girls at Parties (directed by John Cameron Mitchell) will be in theaters in 2017.

Born in the UK, Gaiman now lives in America.

About Dark Horse
For thirty years, Dark Horse Comics has proven to be a solid example of how integrity and innovation can help broaden a unique storytelling medium and establish a small, homegrown company as an industry giant. Founded in 1986 by Mike Richardson, the company is known for the progressive and creator-friendly atmosphere it provides for writers and artists. In addition to publishing comics from top talent, such as Eric Powell, Mike Mignola, Geof Darrow, Brian Wood, Gail Simone, Stan Sakai, and Guillermo del Toro, and comics legends, such as Will Eisner, Milo Manara, Kazuo Koike, Neil Gaiman, and Frank Miller, Dark Horse has developed its own successful properties, such as The Mask, Ghost, X, and Barb Wire. Its successful line of comics, manga, and products based on popular properties includes Dragon Age, Buffy the Vampire Slayer, Aliens, Conan, Tomb Raider, Halo, The Witcher, Serenity, Game of Thrones, and Avatar: The Last Airbender. Today Dark Horse Comics is the largest independent comic book publisher in the US and is recognized as one of the world’s leading entertainment publishers.
Posted by Qwill at 1:15 PM