What's Up for the Debut Author Challenge Authors? - Part 15

At the Sign of the Crow and Moon
A Sorcery Ascendant Prequel Novella
Mitchell Hogan, July 4, 2016
Kindle eBook, 81 pages 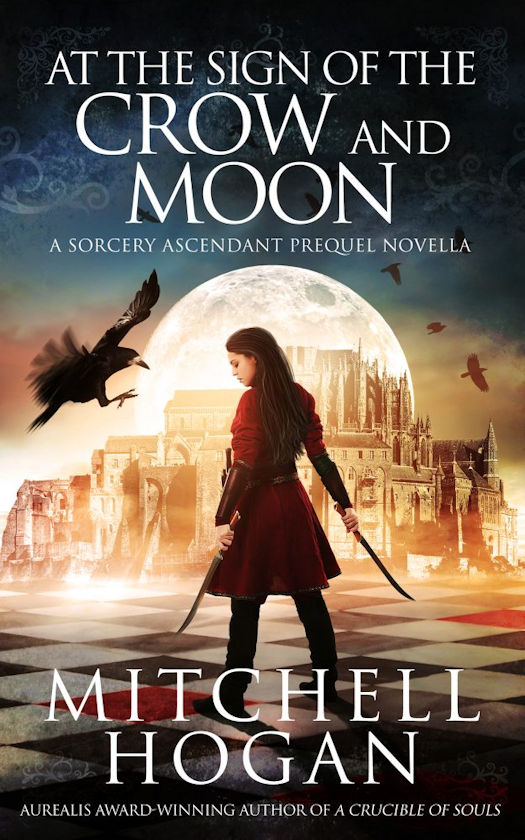 A fast-paced fantasy adventure in the world of the Sorcery Ascendant Sequence, from Aurealis Award winning author Mitchell Hogan.

Ten years before A Crucible of Souls…

In the bustling capital city of the Mahruse Empire, Felicienne Shyrise spends her days as a talented investigator, taking on stolen goods and missing person cases, and the occasional murder the city guard are too incompetent, or too lazy, to resolve.

During nights, she hones her skills playing Dominion, a board game almost as complicated as life itself. She dreams of making a name for herself, and becoming the richest woman in the Empire.

But when she’s roped into a murky investigation by a First Adjudicator to the immortal Emperor himself, her life is thrown into disarray. Will this be the perfect opportunity to showcase her skills and make valuable connections, or will her future now be in the hands of political powers that can never be denied?

Working against her will, and afraid of the consequences of refusing the commission, she uncovers evidence that points to an attempt on the Emperor’s life. Felicienne rapidly finds herself a target, and must use her considerable wits to uncover the plot of an unseen enemy who always seems to be one step ahead of the game.

This is a standalone novella of 25,000 words. No prior knowledge of the Sorcery Ascendant Sequence is required to enjoy it, which means it's a perfect introduction for new readers or a chance for Sorcery Ascendant veterans to spend a little more time with Felicienne Shyrise. In this gritty and breathtaking conclusion to the Sorcery Ascendant Sequence, the award-winning fantasy series, a young sorcerer must learn to wield his extraordinary powers to defeat two warring empires.

In a battle of armies and sorcerers, empires will fall.

After young Caldan’s parents were slain, a group of monks raised the boy and initiated him into the arcane mysteries of sorcery. But when the Mahruse Empire was attacked, and the lives of his friends hung in the balance, he was forced to make a dangerous choice.

Now, as two mighty empires face off in a deadly game of supremacy, potent sorcery and creatures from legend have been unleashed. To turn the tide of war and prevent annihilation, Caldan must learn to harness his fearsome and forbidden magic. But as he grows into his powers, the young sorcerer realizes that not all the monsters are on the other side.

And though traps and pitfalls lie ahead, and countless lives are at stake, one thing is certain: to save his life, his friends, and his world, Caldan must risk all to defeat a sorcerer of immense power.

Failure will doom the world. 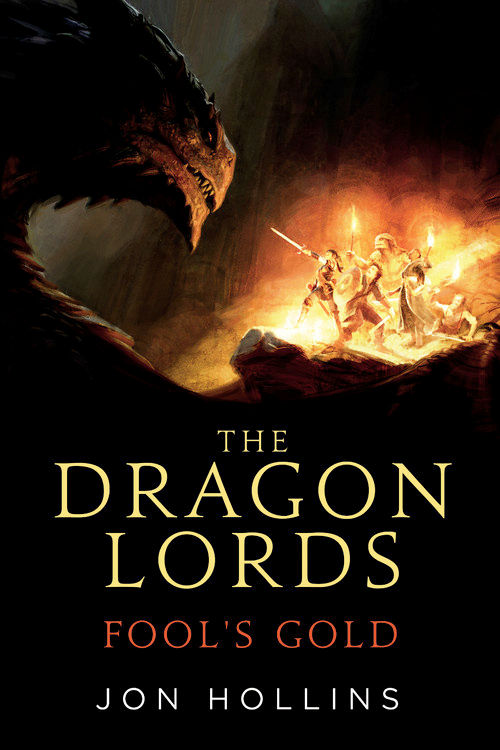 Guardians of the Galaxy meets The Hobbit in this rollicking fantasy adventure.

It's not easy to live in a world ruled by dragons. The taxes are high and their control is complete. But for one group of bold misfits, it's time to band together and steal back some of that wealth.

No one said they were smart.

Guardians of the Galaxy meets The Hobbit in this rollicking fantasy adventure series.

The Dragons who once ruled over the land are dead.

The motley crew that stumbled through that revolution are rich and praised as saviors.

Everyone gets to live happily ever after, right?

Well, it might have worked out that way if the dragons in Kondorra had been the only ones. If they hadn't been just the tip of the spear about to fall upon the whole world... A hitman who only kills other hitmen winds up a target himself.

Michael Hendricks kills people for money. That aside, he's not so bad a guy.

Once a covert operative for a false-flag unit of the US military, Hendricks was presumed dead after a mission in Afghanistan went sideways. He left behind his old life--and beloved fiancée--and set out on a path of redemption...or perhaps one of willful self-destruction.

Now Hendricks makes his living as a hitman entrepreneur of sorts--he only hits other hitmen. For ten times the price on your head, he'll make sure whoever's coming to kill you winds up in the ground instead. Not a bad way for a guy with his skill-set to make a living--but a great way to make himself a target. 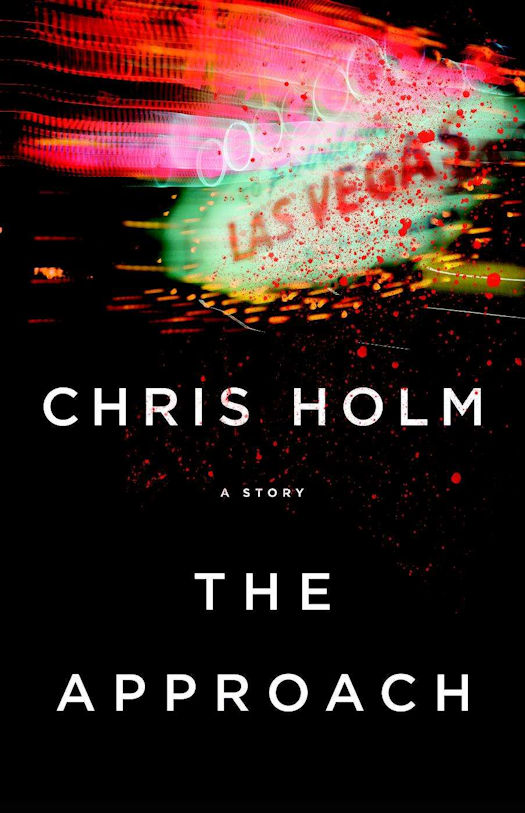 Hitman with a heart of gold Michael Hendricks is back in this digital-exclusive short story.

When a strip-club mogul puts out a hit on a dancer who won't give him off-the-clock attention, Hendricks takes a detour to Las Vegas to stop the job in its tracks. With tech genius Lester in his ear and a fake identity as cover, Hendricks has only one problem: he has no idea what the target looks like. Against the scorching heat of the city's desert outskirts, a case of mistaken identity nearly turns fatal, but our principled hitman has a few tricks of his own up his sleeve. 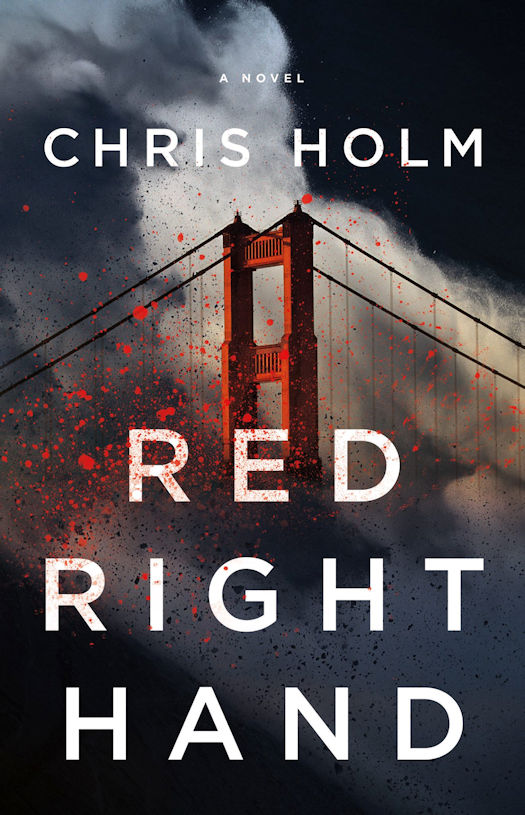 If the good guys can't save you, call a bad guy.

When viral video of an explosive terrorist attack on San Francisco's Golden Gate Bridge reveals that a Federal witness long thought dead is still alive, the organization he'd agreed to testify against will stop at nothing to put him in the ground.

FBI Special Agent Charlie Thompson is determined to protect him, but her hands are tied; the FBI's sole priority is catching the terrorists before they strike again. So Charlie calls the only person on the planet who can keep her witness safe: Michael Hendricks.

Once a covert operative for the US military, Hendricks makes his living hitting hitmen... or he did, until the very organization hunting Charlie's witness--the Council--caught wind and targeted the people he loves. Teaming up with a young but determined tech whiz, Cameron, on the condition she leave him alone after the case, Hendricks reluctantly takes the job.

Of course, finding a man desperate to stay hidden is challenging enough without deadly competition, let alone when the competition's shadowy corporate backer is tangled in the terrorist conspiracy playing out around them. And now Hendricks is determined to take the Council down, even if that means wading into the center of a terror plot whose perpetrators are not what they seem. 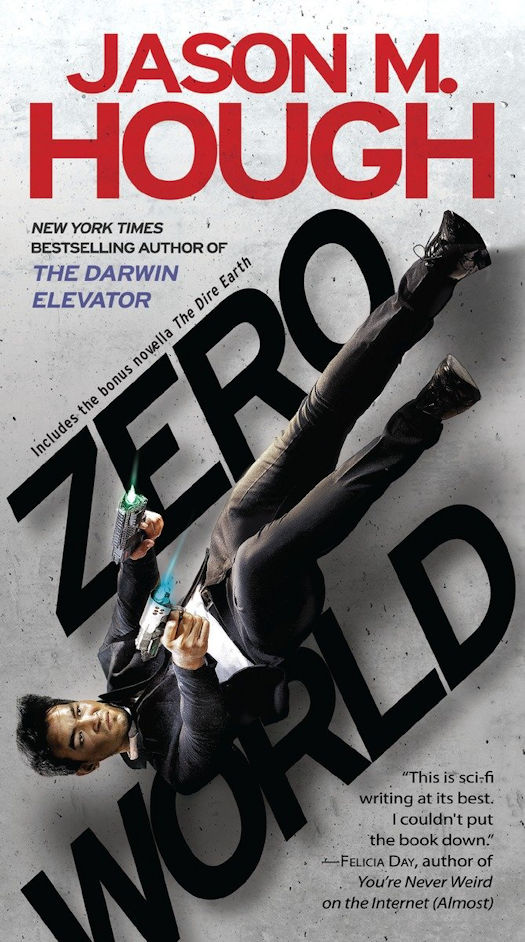 Published in rapid succession, Jason M. Hough’s first three novels, The Darwin Elevator, The Exodus Towers, and The Plague Forge, earned mountains of praise and comparisons to such authors as James S. A. Corey and John Scalzi. Now Hough returns with a riveting near-future spy thriller that combines the adrenaline of a high-octane James Bond adventure with mind-blowing sci-fi speculations worthy of Christopher Nolan’s Inception.

Technologically enhanced superspy Peter Caswell has been dispatched on a top-secret assignment unlike any he’s ever faced. A spaceship that vanished years ago has been found, along with the bodies of its murdered crew—save one. Peter’s mission is to find the missing crew member, who fled through what appears to be a tear in the fabric of space. Beyond this mysterious doorway lies an even more confounding reality: a world that seems to be Earth’s twin.

Peter discovers that this mirrored world is indeed different from his home, and far more dangerous. Cut off from all support, and with only days to complete his operation, Peter must track his quarry alone on an alien world. But he’s unprepared for what awaits on the planet’s surface, where his skills will be put to the ultimate test—and everything he knows about the universe will be challenged in ways he never could have imagined.

Includes the complete bonus novella The Dire Earth, a prequel to the bestselling sci-fi adventure The Darwin Elevator.

Skyler Luiken, the daring hero of the Dire Earth Cycle, returns in the first book of a standalone action/sci-fi duology pitting a team of tenacious postapocalyptic survivalists against an incredible alien foe.

In the second book of the action/sci-fi duology that began with Injection Burn, Skyler Luiken’s elite team of space-faring adventurers must defeat a violent, technologically superior foe if they wish to ever return to Earth. 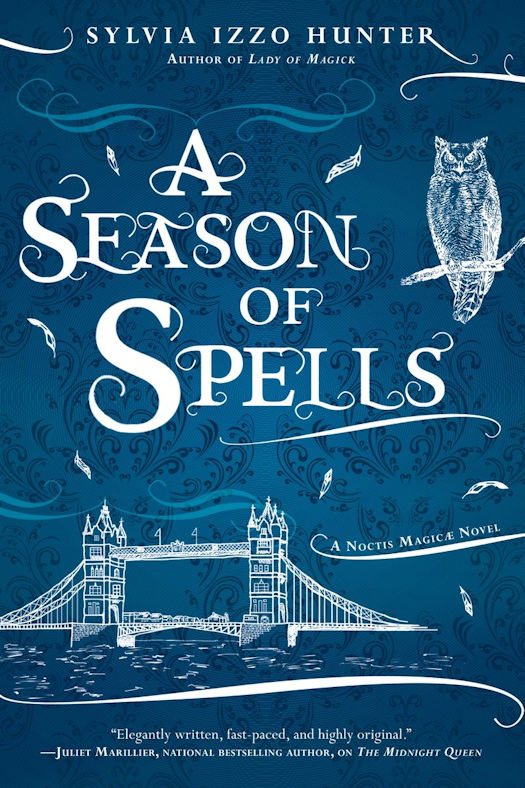 In the latest novel from the author of Lady of Magick, Sophie and Gray Marshall must save the Kingdom of Britain from a tide of dark magic…

Three years after taking up residence at the University of Din Edin, Sophie and Gray return to London, escorting Lucia MacNeill, heiress of Alba, to meet the British prince to whom she is betrothed. Alas, sparks fail to fly between the pragmatic Lucia and the romantic Prince Roland, and the marriage alliance seems to be on shaky ground.

Sophie tries to spark a connection between Roland and Lucia by enlisting them both in her latest scheme: reopening the mysterious and long-shuttered women’s college at Oxford. Though a vocal contingent believes that educating women spells ruin, Sophie and her friends dream of rebuilding the college for a new generation of women scholars.

But the future of the college—and of the kingdom—are imperiled when the men who tried to poison King Henry escape from prison and vanish without a trace. Sophie and Gray will need all their strength and ingenuity—and the help of friends both present and long past—to thwart the enemy at Britain’s gates.