Review: Dreamer’s Pool and Tower of Thorns by Juliet Marillier 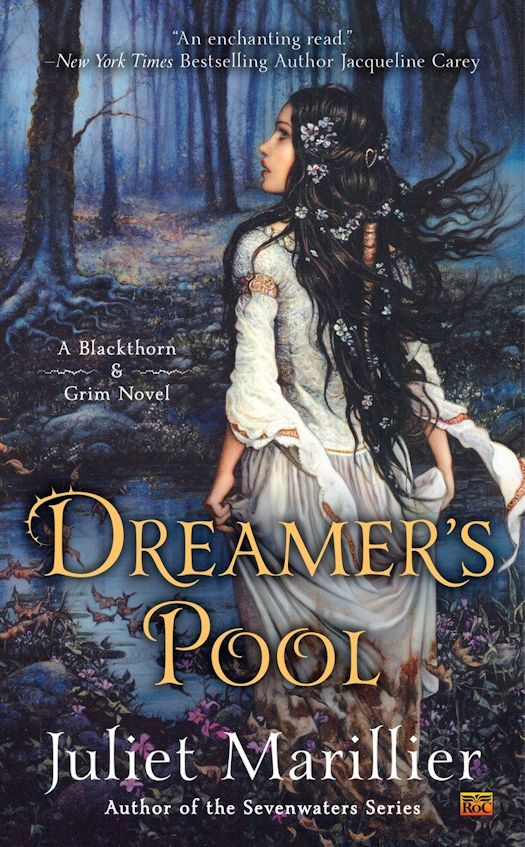 Award-winning author Juliet Marillier “weaves magic, mythology, and folklore into every sentence on the page” (The Book Smugglers). Now she begins an all-new and enchanting series that will transport readers to a magical vision of ancient Ireland….

In exchange for help escaping her long and wrongful imprisonment, embittered magical healer Blackthorn has vowed to set aside her bid for vengeance against the man who destroyed all that she once held dear. Followed by a former prison mate, a silent hulk of a man named Grim, she travels north to Dalriada. There she’ll live on the fringe of a mysterious forest, duty bound for seven years to assist anyone who asks for her help.

Oran, crown prince of Dalriada, has waited anxiously for the arrival of his future bride, Lady Flidais. He knows her only from a portrait and sweetly poetic correspondence that have convinced him Flidais is his destined true love. But Oran discovers letters can lie. For although his intended exactly resembles her portrait, her brutality upon arrival proves she is nothing like the sensitive woman of the letters.

With the strategic marriage imminent, Oran sees no way out of his dilemma. Word has spread that Blackthorn possesses a remarkable gift for solving knotty problems, so the prince asks her for help. To save Oran from his treacherous nuptials, Blackthorn and Grim will need all their resources: courage, ingenuity, leaps of deduction, and more than a little magic. 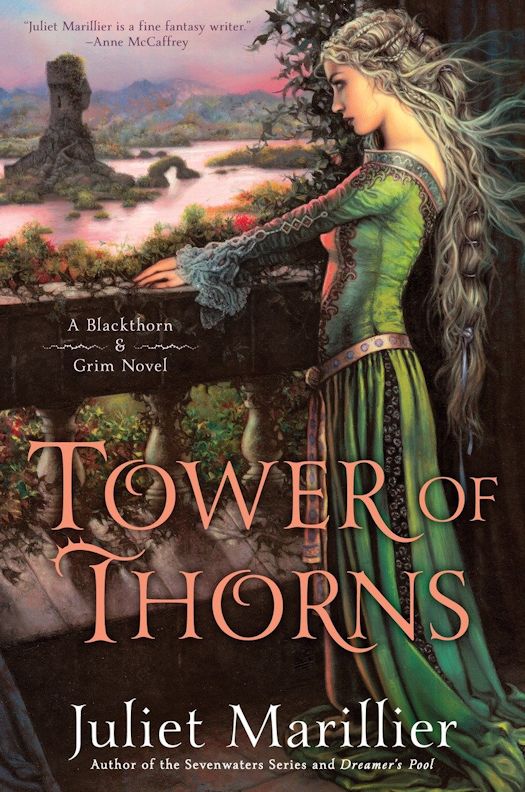 Disillusioned healer Blackthorn and her companion, Grim, have settled in Dalriada to wait out the seven years of Blackthorn’s bond to her fey mentor, hoping to avoid any dire challenges. But trouble has a way of seeking out Blackthorn and Grim.

Lady Geiléis, a noblewoman from the northern border, has asked for the prince of Dalriada’s help in expelling a howling creature from an old tower on her land—one surrounded by an impenetrable hedge of thorns. Casting a blight over the entire district, and impossible to drive out by ordinary means, it threatens both the safety and the sanity of all who live nearby. With no ready solutions to offer, the prince consults Blackthorn and Grim.

As Blackthorn and Grim begin to put the pieces of this puzzle together, it’s apparent that a powerful adversary is working behind the scenes. Their quest is about to become a life and death struggle—a conflict in which even the closest of friends can find themselves on opposite sides.

Juliet Marillier has started a new series with two equally wounded characters, Blackthorn and Grim, who met in the dungeons of Lord Mathuin awaiting execution. The night before her execution, Blackthorn is offered a bargain by one of the Fae lords – he will help her escape if she agrees to move to another country, become a healer woman again, to help anyone who asks, and put off her vengeance for seven years. Despite her intense desire for revenge, Blackthorn agrees and Conmael causes the prison to break open. One of her fellow inmates, Grim follows to help her and she cannot bring herself to send him away because of the bargain.

Written in alternating chapters from each character’s perspective, both Dreamer’s Pool and Tower of Thorns take a basic fairytale and rewrites it in a completely new way. In Dreamer’s Pool, there is a princess who mysteriously changes when she arrives at her betrothed’s palace. After corresponding with Flidais, Prince Oran has fallen in love with her. However, the reality of her in the flesh is nothing like the picture he fashioned from her letters. Finally, he requests that Blackthorn and Grim come work at his castle for a time and “spy” on Flidais to determine if there is something odd about her.

In Tower of Thorns, there is a monster who wails from sunup to sundown. Lady Geiléis has requested that Prince Oran help remove the creature that is threatening her people. Oran turns to Blackthorn and Grim for a solution, and they travel to Bann to investigate. At the same time, an old friend from Blackthorn’s past has arrived and requested that she return to fight against Lord Mathuin, the man upon whom she wishes revenge.

Each of these novels eventually gives some of the background stories for Blackthorn and Grim, with Blackthorn's story coming in the first book and Grim's in the second. Both of them have experienced horrifying losses that affect their lives tremendously. Marillier does a terrific job of illustrating their damage at first without explaining the reason for it, and that draws the reader further into the story.

While each novel has its basis in a fairytale, Marillier has tweaked them enough that the reader does not determine the original story until almost the very end. Again, Marillier does her best work by layering the tale, hinting at the origin but only truly revealing it in the final chapters. This makes it very difficult to put either book down once it is begun. I can hardly wait to see what new secrets she will reveal for Blackthorn and Grim.