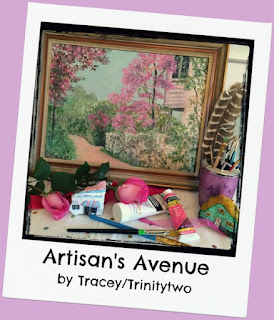 Artisan's Avenue is a place to showcase fantasy, horror, or sci-fi artists and their creations. As you may have guessed, the name pays homage to Artist's Alley and the wildly talented people I've met at various comic cons. I am continuously fascinated and impressed with their creativity and imagination and I hope our readers feel the same.


I would like to welcome illustrator/artist Frankie B. Washington back to The Qwillery.

Tracey M:  Frankie would you tell our audience a bit about your creative background?

Frankie B. Washington:  Once Upon A Time in the community of Jamaica Plain, Massachusetts a youngster (that would be me) was given the gifts of a pencil and the brown shopping bag that mama had brought the groceries home in... And set to the task of illustrating what came to his young mind. My creativity started at a very young age and was influenced by comic books, novels, television and films. I remember that out of all my friends, I tended to get very detailed with our fantasy games. For instance, I had to know how big a dragon was and the shape of its wings in order to add more credibility to its existence. This of course annoyed many of my friends but I felt justified that the dragon would reflect a character that could exist longer - if it was concepted better. This frame of thinking carried me thru middle, high and eventually art school. I believe to truly create a character or scenario you need to devote time to establishing a solid foundation to build your idea upon. It all began with a brown grocery bag and a small pencil.

TM:  You've worked for multiple companies as a commercial illustrator, how did you begin accepting commissions for artwork from individuals? And what has been your favorite commission to date?

FBW:  I've been a freelance illustrator for 26 years now, so the idea of accepting commissions started around 26 years ago. I mean the reality is that being self-employed is not an easy job to undertake. Those of us who have survived the shifting waters have learned how to operate our vessel more effectively and remembering that we need to constantly be on the hustle for clients. I will admit that this is the most exciting and addictive part of the career. I really love pitching what I can do and offer to a potential client. Then the wait to see if I've gotten the gig or not. I'm a stern believer of the "One Door Closes ... And Five More Will Open". I live it every single moment of the day. I'm addicted to that sensation.

My favorite commission to date would be this recent Botcon 2016 Chase Card commissioned by Fun Publications : http://www.fpcomics.com/ 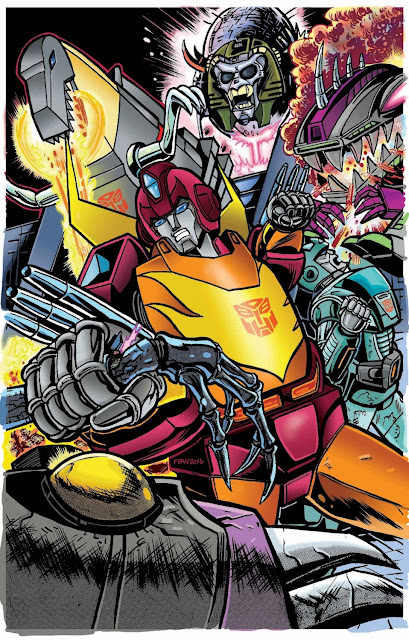 TM:  You've worked in Film, Animation, RPG/Magazine Print, Comics, Editorial, Advertising, Toys, Video games, Trading/Sketch Cards. Do you have a favorite field and if so why?

FBW:  The truth is that I have a love for Advertising because it really shaped me up as an artist in dealing with the commercial aspect of the business. What I mean is that it helped me to see that art is what you make of it and that business has a part to play in the grand scheme. I learned how to produce art at a faster pace, yet not lose quality of the image. My ability to express my ideas and even pitch myself was all because of advertising. So I have a special place for it BUT my REAL passion has always been to work in the comic book industry. Just any way to be able to do sequential art and really challenge my storytelling skills. To develop characters that might be seared into the subconscious of a young person who happens to also have a pencil and brown paper bag in front of them. I'm so happy that I've taken chances and gotten the opportunity to dabble in so many aspects of the art industry.

TM:  What are some of the things that inspire your art?

FBW:  Everything inspires me in some form... or fashion. My girlfriend Jess, is constantly barraged by me creating stories from nothing with her in it. I also include our cat, Shadow and friends as well. This is something that I've always done and it's helped me to create some really cool things. I tend to also read various books and novels, I really can't peg one genre because I'm open to anything. This goes with music as well because each and every sound offers another wonderful inspiration for me.

TM:  Please tell us about something that you are currently working on.

FBW:  I'm currently working on the web comic series called Secret Lives Of Villains: https://cambriancomics.com/. I'm also the artist for The Mighty Mascots which is debuting in the anthology called Reckless Chronicles by Reckless Sidekick Productions: http://www.heroenvy.com/reckless-chronicles.html. I also did a variant cover for Night Of The Fire Beast: https://www.facebook.com/Firebeastdorugan/photos/a.462295670602813.1073741828.430616807104033/574455442720168/?type=3&theater.

TM:  What are some of your favorite things you have done?

FBW:  One the greatest things that I'm so blessed to have done and I still go on about was my climbing of Mt. Katahdin in 2003. Reaching the summit was an amazing thing and an analogy of how I truly wanted to live. To at least attempt to climb something that seems impossible and succeeding when you've given your all.

TM:  Is there a cool story you'd like to share about a commission or any of your artwork?

FBW:  There's been a few but I will say that last year's Rhode Island Comic Con pretty much did it for me. I was commissioned by the show to create artwork for the badge passes for the Frank Welker (Megatron) and Peter Cullen (Optimus Prime) meet and greet. I didn't know that they also took the artwork, blew it up and made them into con exclusive lenticular posters. I was given some posters and allowed to meet both voice actor legends. I still get the shakes thinking about it. LOL

FBW:  Surprisingly, I've decided to take off this year from the shows and cons. I might pop up at a few as an attendee but I really needed to recharge my batteries after 2015. I have some artwork in the upcoming issue of Cemetery Dance Magazine. I will have some news about some toy concepts I worked on from SCS Direct - Summer time (fingers crossed). I will most likely be working on some new art for The Mighty Mascots. Definitely more trading cards in the fall... And of course the other projects that pop up at more door unexpectedly. LOL 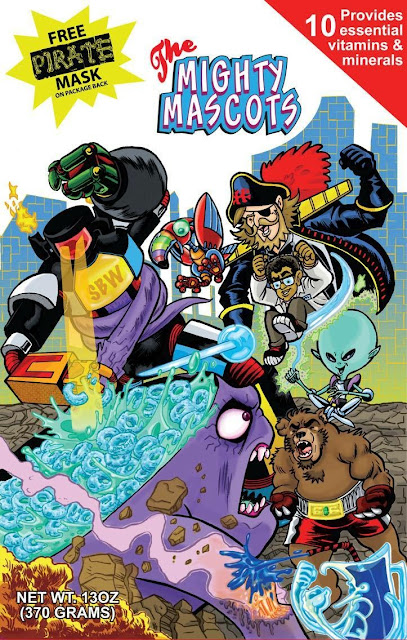 TM:  Ask and then answer a question about your work that I haven't asked.

FBW:  Frankie do you ever get asked whether you did all the artwork you posted... Or not? Since there's such a rash of artwork being stolen and used by people.

FBW:  Wow, Great question. When I look at the body of artwork that I've done. There are times that I can't believe I really did all those pieces. I can honestly say that YES - I drew everything from rough sketch to final art. Working as a commercial illustrator, I've had to adapt my style on numerous assignments to fit the needs of the client. I feel this has really helped me immensely because I can't really be placed in one genre of the art industry. I always admired the title of Illustrator because it meant to me that this individual could draw anything and for any client of need be. It was never a question of style but whether the illustrator can rise up to the task set before them and execute the assignment. Which of course makes the client very, very happy.

Here's a link to my Deviant Art Gallery : http://fbwash.deviantart.com/gallery/