If April showers bring May flowers what do April torrential downpours bring? Answers on a postcard. It has been, as the English say, chucking it down. One of my friends posted that it had been snowing. SNOWING!!! This is England not Canada or the States. Yikes.

Dear reader, this has been a slow week for me. I have been very unproductive of late. I actually only read 1 book but I forgot to tell you last week about one of the books I had read so will be including it here. I hope you don't mind.  So what do I have to tell you about? 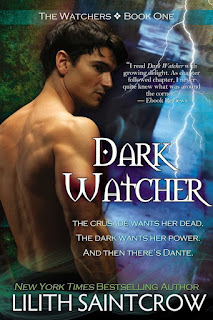 Theodora is a very talented witch who loves her quirky shop with her quirky friends after a life on the run.  When the tall, dark and handsome Dante comes into her life with danger on his heels she isn't so sure he is trustworthy but despite this she can't seem to say no.  Theodora is everything Dante has ever wanted and who is sworn to protect. As a Watcher it is his duty to bring Theo to the Circle of Light but that might be easier than it sounds to bring his charge into the fold.

You might remember a couple of weeks ago I read Lilith Saintcrow's The Demon's Librarian and thought it was OK. Normally, I like Saintcrow's female characters as they are usually a bit forthright and stick up for themselves. I am deeply disappointed by Dark Watcher. I think this was a poor substitute for Chess (Francesca) from The Demon's Librarian. I also think the plots are far too similar especially since they aren't part of the same series or cross overs. I felt a bit ripped off and that Saintcrow just recycled her characters and, in fact, the whole underlying plot. While Chess from The Demon's Librarian was tough and could stick up for herself Theodora from Dark Watcher can only be described as a big wimp.  I ended up skipping a few pages in this book so unless you are desperate for something to read I would give it a miss. 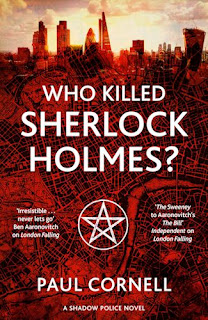 Book 2 this week was Paul Cornell's Who Killed Sherlock Holmes which is the third book in the Shadow Police series. In this novel the team are back. Quill, Ross, Costain, and Sefton are trying to find who killed Sherlock Holmes. It seems impossible but someone is killing Sherlock Holmes...not just the fictional character but anyone who has played him. Still struggling with the events from the previous novels that have left Ross without any joy in her life and Quill suffering the aftereffects of being in hell the team are more than impaired in their attempt to solve this case.

There is soo much going on in this novel it is difficult to describe it without giving away some major plot points. Ross is deeply affected after sacrificing her future happiness in order to save her father. Costain deeply regrets the circumstances that led to Ross's loss while Quill falls deeper and deeper into into despair over the fate of anyone who lives in London. The surprise for this story is Lofthouse who has been a minor character in the previous books. We get the opportunity to find out what happened to her and her lost memories. This is s great story and keeps you guessing all the way through. My only criticism is that I spent the first few chapters not knowing what on earth was going on and I thought it dragged in the middle. I had no idea 'who dunnit' and it was a super twist so I hope you are as surprised as I was. My one word of caution, dear reader, this book is quite depressing so don't start it if you are feeling a bit blue. It has a happyish ending but it takes a long time to get there. Otherwise, enjoy!


That is it for me this week. Until next week, Happy Reading! 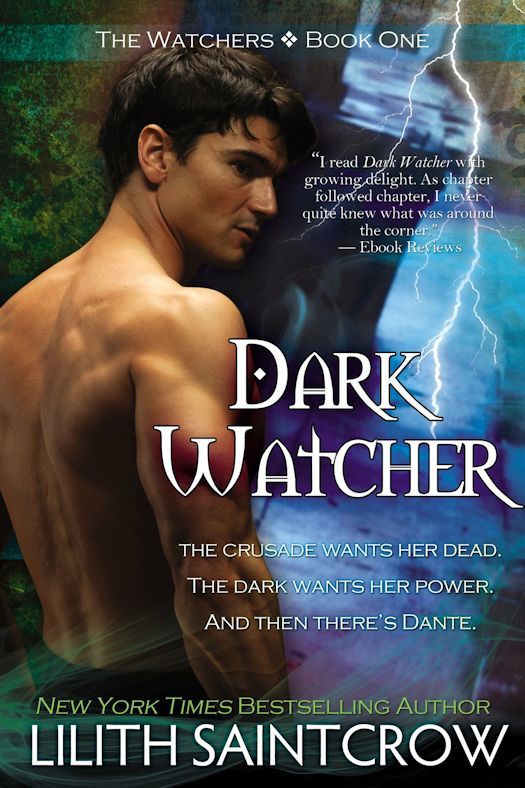 Theodora Morgan knows she's a little strange. Her talent for healing has marked her as different all through a life spent moving from town to town when someone notices her strangeness. Now she has a home, and she doesn't want to leave-but she's been found. The Crusade wants her dead because she's psychic, the Dark wants to feed on her talent, and then there's Dante. Tall and grim and armed with black-bladed knives, guns, and a sword, he says he's here to protect her. But what if he's what Theo needs protection from most? 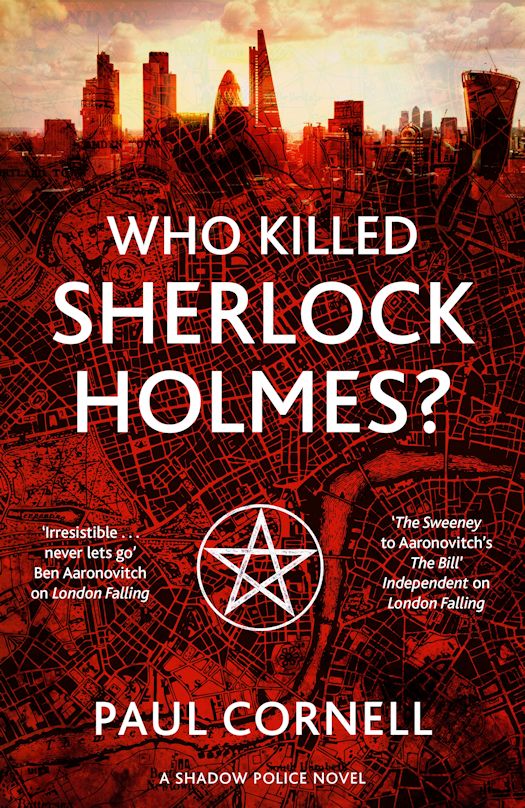 The ghost of Sherlock Holmes is dead, but who will solve his murder?

The Great Detective's ghost has walked London's streets for an age, given shape by people's memories. Now someone's put a ceremonial dagger through his chest. But what's the motive? And who - or what - could kill a ghost?

When policing London's supernatural underworld, eliminating the impossible is not an option. DI James Quill and his detectives have learnt this the hard way. Gifted with the Sight, they'll pursue a criminal genius - who'll lure them into a Sherlockian maze of clues and evidence. The team also have their own demons to fight. They've been to Hell and back (literally) but now the unit is falling apart . . .

Prior novels in the Shadow Police 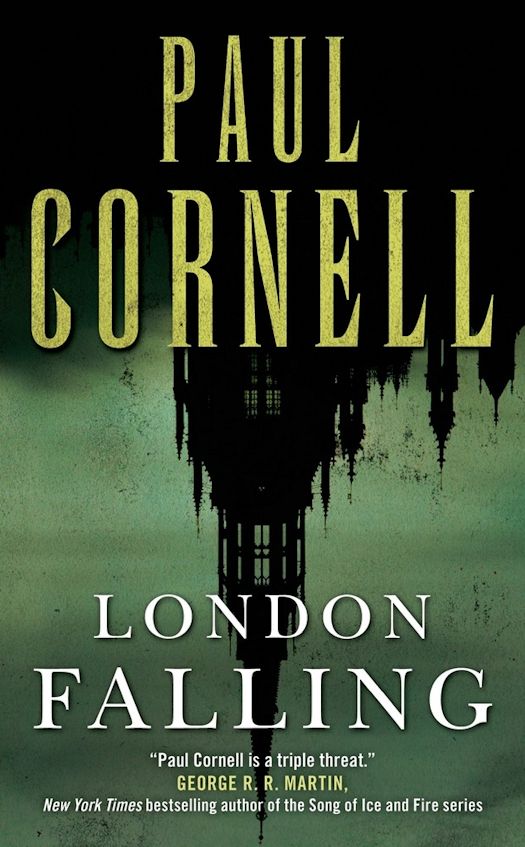 Police officers Quill, Costain, Sefton, and Ross know the worst of London—or they think they do. While investigating a mobster's mysterious death, they come into contact with a strange artifact and accidentally develop the Sight. Suddenly they can see the true evil haunting London's streets.
Armed with police instincts and procedures, the four officers take on the otherworldly creatures secretly prowling London. Football lore and the tragic history of a Tudor queen become entwined in their pursuit of an age-old witch with a penchant for child sacrifice. But when London's monsters become aware of their meddling, the officers must decide what they are willing to sacrifice to clean up their city, in London Falling by Paul Cornell. 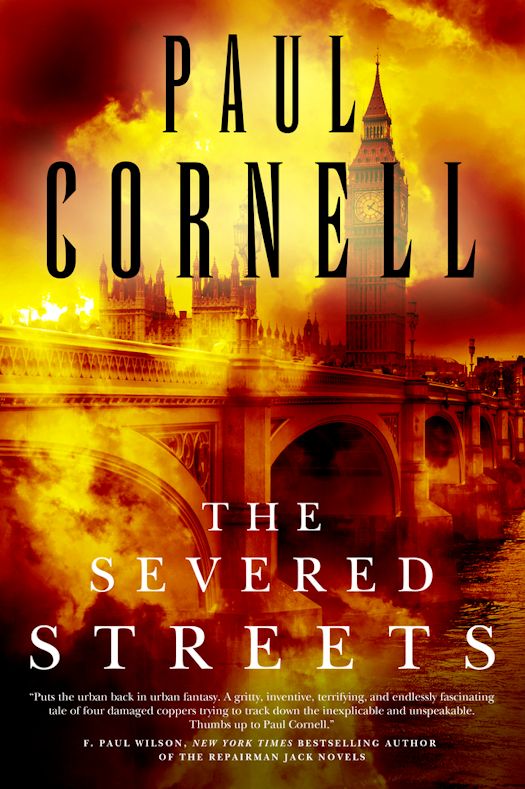 Desperate to find a case to justify the team's existence, with budget cuts and a police strike on the horizon, Quill thinks he's struck gold when a cabinet minister is murdered by an assailant who wasn't seen getting in or out of his limo. A second murder, that of the Commissioner of the Metropolitan Police, presents a crime scene with a message...identical to that left by the original Jack the Ripper.

The new Ripper seems to have changed the MO of the old completely: he's only killing rich white men. The inquiry into just what this supernatural menace is takes Quill and his team into the corridors of power at Whitehall, to meetings with MI5, or 'the funny people' as the Met call them, and into the London occult underworld. They go undercover to a pub with a regular evening that caters to that clientele, and to an auction of objects of power at the Tate Modern.

Meanwhile, in Paul Cornell's The Severed Streets, the Ripper keeps on killing and finally the pattern of those killings gives Quill's team clues towards who's really doing this....