Interview with Gregory A. Wilson


Please welcome Gregory A. Wilson to The Qwillery. Icarus, a graphic novel, will be published on April 23rd by Silence in the Library Publishing. 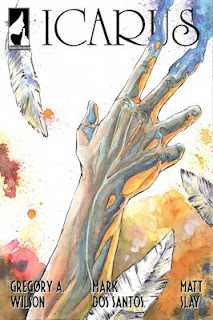 Gregory:  I began writing when I was very young, if you could call it writing--I was more interested in writing plays first, and did a whole series of them starting from the age of eight through my first year of graduate school or so. In that work I was really starting to play with dramatic experience, visualizing scenes in my head, and although much of the early stuff was cliched and melodramatic, it was very helpful to me in getting a sense of dialogue and scene pacing...and, during high school years which weren't always pleasant, it got me out of my reality and into a much more tenable imaginative space. I started to sprinkle in short stories and poems as time went on, but didn't turn to writing novels until after my Masters degree was finished, when I was royally sick of academic work and wanted to indulge my more creative side--I finished my first novel, The Third Sign, in 2004, but it didn't actually reach the reading public in 2009. So my path to prose publication (at least in fiction) was a long and winding one!

Gregory:  Balance. In my earlier career I had difficulty with underwriting, concentrating overmuch on dialogue in accordance with my background in drama, and later on as my academic career continued I had a tendency to overwrite in my creative work, giving too much information too soon. I've had to learn to balance those extremes, to give just enough information to keep readers from being confused while still leaving them work to do in thinking about the book's themes, character development, and so on. That balance also applies to worldbuilding: how much information do I need to provide the reader about the magic system, the political environment, the religious and cultural circumstances of the world, and so on? I need to constantly check whether I'm keeping those factors in balance within my work--but I'm happy to say that process has become much more organic and natural over the years.

TQ:  How is writing a novel and a graphic novel different?

Gregory:  We'd need more space than we have here to go through that one! I don't think I realized how very different the process was before embarking on it, but this has been an eye-opening experience. First of all, graphic novel writing is much more of a collaborative process than regular prose writing, where it's basically you and your editors--here you have the artists, the editors, the letterers, and sometimes the script writer. I enjoy collaborative work quite a bit, but it's definitely a different feel than what I get from my usual writing work. Second, in graphic novel writing, less is more: it was a humbling experience to see my long descriptive passages of the world of Vol reduced to a page or two of gorgeous drawing, but I soon realized that what my words needed to do in this environment was further character development through the way they discussed their experiences and considered the options before them--the rest, including emotional reactions, could (and should) largely be left to the art. Much of the credit for this process goes to Keith DeCandido, who (as usual) did an efficient and professional job in producing the graphic novel script. But in the visual outline I provided to the artists Matt Slay and Mark Dos Santos, and in the conversations I had with them, I endeavored to concentrate on how to represent the visual field as effectively as possible, to get myself out of the way and let the pictures, supplemented by the dialogue, tell the story. Interestingly, in doing this I realized I wasn't letting go of the story, but rather telling it as it needed to be told in this context, drawing on the power of the visual to supplement the words I had carefully crafted to create a similar imaginative effect.

TQ:  Your first graphic novel is Icarus. What appeals to you about the Icarus myth?

Gregory:  Many things--it's a beautiful (and tragic) story, touching on a lack of control, joy and sorrow, and the relationship between father and son. But more than that, the premise of the Icarus myth is based in simplicity--be conscious of your place and aware of your surroundings--but also filled with complexity, with multiple tensions and complications to be just found below the surface. In particular, I've always been interested in seeing aspects of light in the darkness--the original Icarus is a deeply sad story, but I wondered if there was hope I could pull from despair if the tale went in a different direction, with different motivations and outcomes. My Icarus is also about ambition, in part, but not Icarus's, and not overwhelming other more admirable character traits like compassion, kindness, and empathy. That a story like Icarus could be transformed and developed into something like what I wrote is a testament to the quality of the original myth.

TQ:  What sort of research did you do for Icarus?

Gregory:  Icarus was actually first inspired by a Cirque du Soleil show, also inspired by the Icarus myth, and the experience of that show was the first thing to get me thinking about the concepts and ideas of the original myth. I then looked back at the original myth and analysis of it--I'm also an academic, so this kind of thing is familiar and comfortable for me--and put together a list of common critical observations about the themes and other aspects of the story. From there the story went in a very different direction, and I found myself doing more anthropological and evolutionary research about the creatures which could exist in the heart of a dormant volcano on another planet as time went on. And that research was fun, too!

TQ:  Please tell us a bit about your characters Icarus and Jellinek.

Gregory:  Jellinek is a four foot tall, dark red-skinned prospector living in the heart of Vol with a pet solar (two-tails and lava-resistant) called Rig, making a minor living by finding flamepetals, the main energy source in Vol. Icarus is a taller, thin young man with wings, perhaps seventeen years old, who falls into the heart of a dormant volcano. Jellinek, a jaded loner who speaks like an character from the Old West, and Icarus, a refined and curious newcomer who speaks something much more like the Queen's English, seem as different from each other as it's possible for two people to be--but as the tale proceeds, they begin to discover that they are much more similar than they could ever have imagined.

TQ:  Where and when is Icarus set?

Gregory:  Icarus is set in the heart of a massive dormant volcano, called Vol by its inhabitants, on the surface of another planet. As for time frame, that's not stated in the tale, but "in the future" is a pretty good guess.

TQ:  Please give us a favorite quote from Icarus.

Gregory:  The opening line: "When Icarus fell into the volcano, making one hell of a racket when he landed, I was out digging for flamepetals with Rig." It helps set the world in my (and I hope the reader's) mind, and gives a sense of Jellinek's voice too...and I loved writing Jellinek.

Gregory:  We're really excited for the Icarus release, and in addition to the digital and physical releases will have an audio version for sale along with it (and free to backers of the original Kickstarter) which came out really, really well. I'm also incredibly excited for my novel Grayshade, about a religious assassin, coming out in September from The Ed Greenwood Group--that's the first of a trilogy, and I can't wait to tell that story as well.

Gregory:  Thank you for having me as well...I enjoyed it! 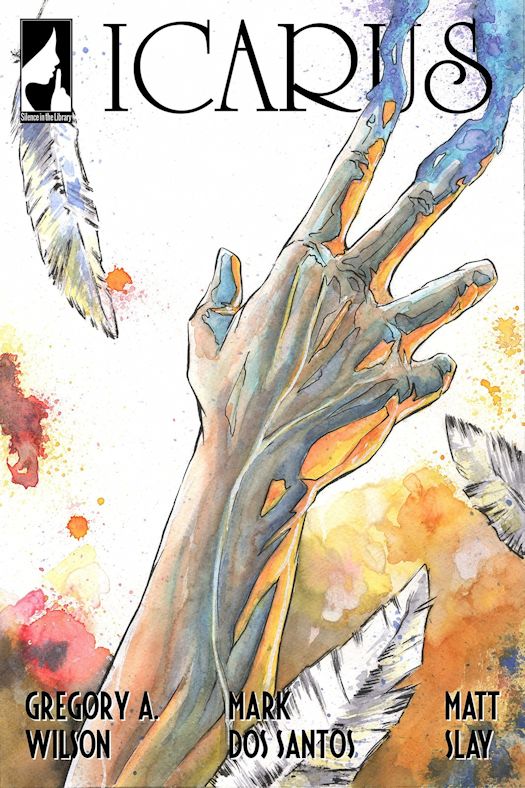 This epic fantasy graphic novel, written by Gregory A. Wilson, with illustrations by Matt Slay and Mark Dos Santos, follows the story of Icarus and Jellinek, an unlikely pair of heroes.

Icarus and Jellinek are, on the surface, about as different as two beings can possibly be.

Icarus is a tall, fair-skinned boy of around 17 who falls to the world of Vol from the sky with no memory of anything but his name. His is a graceful being with wings and incredible powers that he has no memory of how to use.

Jellinek is a four-foot hard-scrabble flamepetal prospector with tough red skin, a gruff disposition and general dislike of everyone around him, and a two-tailed lava-resistant creature called a "solar" as a companion.

On the day that their lives collide, everything about their world changes, and they discover that they have more in common than they can possibly imagine.

Together, Icarus and Jellinek will battle the tyranny of the Magisters, who have enslaved an entire people.

This graphic novel introduces us to the incredibly visual world of Vol, and the stunning array of characters and creatures who call it home. It takes us on an amazing journey in which Icarus and Jellinek fight for their lives and the freedom of a people while trying to unlock the mystery of Icarus's past. To Jellinek's surprise, Icarus's mystery becomes his own, as well. 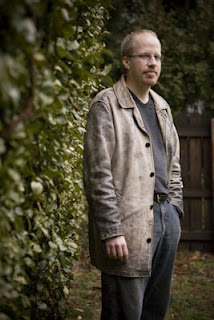 Gregory A. Wilson is Professor of English at St. John’s University in New York City, where he teaches creative writing and fantasy fiction along with various other courses in literature. His first academic book was published by Clemson University Press in 2007; on the creative side, he has won an award for a national playwriting contest, and his first novel, a work of fantasy entitled The Third Sign, was published by Gale Cengage in the summer of 2009. His second novel, Icarus, will be published as a graphic novel by Silence in the Library Publishing in 2016, and he has just signed a three book deal with The Ed Greenwood Group, which will be publishing his Gray Assassin Trilogy beginning with his third novel, Grayshade, in 2016. He has short stories out in various anthologies, including Time Traveled Tales from Silence in the Library, When The Villain Comes Home, edited by Ed Greenwood and Gabrielle Harbowy, and Triumph Over Tragedy, alongside authors like Robert Silverberg and Marion Zimmer Bradley, and he has had three articles published in the SFWA Bulletin.

He is a regular panelist at conferences across the country and is a member of the Gen Con Writers’ Symposium, the Origins Library, Codex, Backspace, and several other author groups on and offline. On other related fronts, he did character work and flavor text for the hit fantasy card game Ascension: Chronicle of the Godslayer, and along with fellow speculative fiction author Brad Beaulieu is the co-host of the critically-acclaimed podcast Speculate! The Podcast for Writers, Readers and Fans, a show which discusses (and interviews the creators and illustrators of) speculative fiction of all sorts and types. He lives with his wife Clea and daughter Senavene–named at his wife’s urging for a character in The Third Sign, for which his daughter seems to have forgiven him–in Riverdale, NY.