Please welcome Dawn Eastman to The Qwillery. An Unhappy Medium, the 4th book in the Family Fortune Mystery series, was published on April 5th by Berkley. 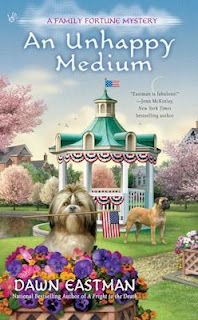 The Zombie Apocalypse and the Missing Diamonds
By Dawn Eastman

When I was a teenager, I loved horror movies. Of course, back then horror movies were less horrible than they are today. We didn’t have CGI back then. I had a gang of friends who would flock with me to whatever slasher film was showing – Freddie Kruger still haunts my dreams. We would watch through the gaps between our fingers as we covered our faces in fear. The really lucky ones got to sit next to Jason who was tall and liked to put his feet on the seat in front of him and hide behind his legs. By leaning slightly, you could share his lanky, knee-capped shield and avoid the worst of the gore on the screen.
Somewhere along the line I lost my taste for the scary movie. Even though I can see it coming from the first scene, I still jump every time the bad guy/creature jumps out at the unsuspecting hero. And I am a complete wimp when it comes to zombies. I find them to be rather disgusting and quite terrifying. I mean how do you stop these things? They’re already dead. You won’t find me watching The Walking Dead or World War Z. However, the idea of a “zombie apocalypse” amuses me. When I heard that there were zombie-apocalypse-themed fun runs I knew I’d have to include one in the next adventure for the Fortune Family.
If you haven’t met Clyde Fortune and her family yet, she is an ex-police officer and a reluctant psychic. She has moved home to a town filled with psychics and is slowly losing the battle with her family over whether or not to use her talents. In An Unhappy Medium, Clyde must cope with training for a charity run that will take place at night, in the woods, with zombies. Clyde’s Aunt Vi is in charge of a zombie team and takes her job a little too seriously. She learns how to do zombie makeup and family dinners become dicey when there are several zombies sitting at the table.
That would normally be enough to handle, but Clyde’s sister, Grace, makes a surprise appearance in town. She and her husband, Paul, have gotten on the wrong side of some very dangerous people. When a dead body is found after the fun run, dressed in the same pirate costume Paul was wearing, Grace is convinced Paul was the intended target. In the usual Fortune Family style, everyone gets involved in solving the mystery. But before they make any headway, Grace is threatened, diamonds go missing, and Clyde’s new neighbor insists on reading her palm and casting dire predictions. I hope you’ll come visit Crystal Haven for this new adventure – the zombies are not too scary and no one will jump out at you. 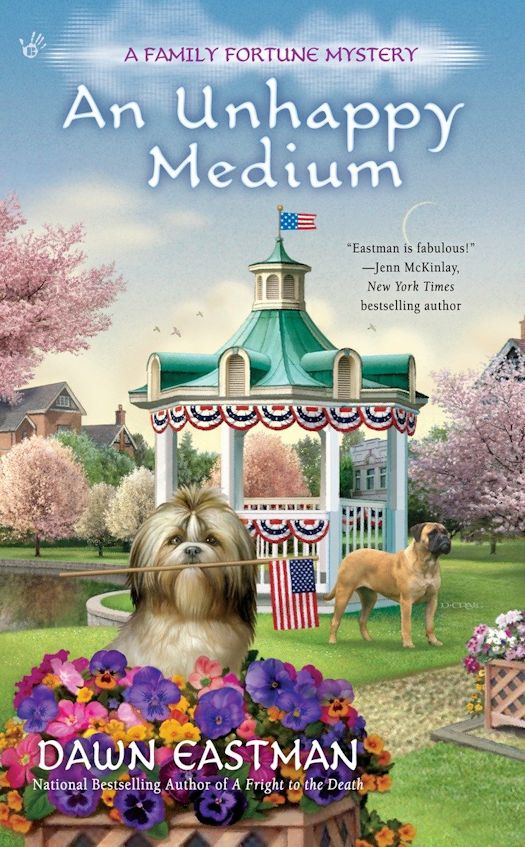 Psychic Clyde Fortune and her zany family are back in the fourth in the national bestselling series from the author of A Fright to the Death.

All of Crystal Haven, Michigan, is psyching up to participate in a Zombie Fun Run organized by Clyde’s nephew Seth, but Clyde is fretful about the undead festivities. For one thing, her sister, Grace, has unexpectedly returned to town after fifteen years. For another, Clyde has the nagging feeling that something is about to go wrong…

When one of the zombie runners is found murdered and then Grace disappears, Clyde realizes her grim premonition is dead-on. Now, she and her police detective boyfriend Mac must find a ghoulish murderer before someone points the finger at Grace. And when a tangled web of family secrets and old grudges combines with a mysterious case of stolen diamonds, even someone as quick-witted as Clyde might not be able to outrun a killer… 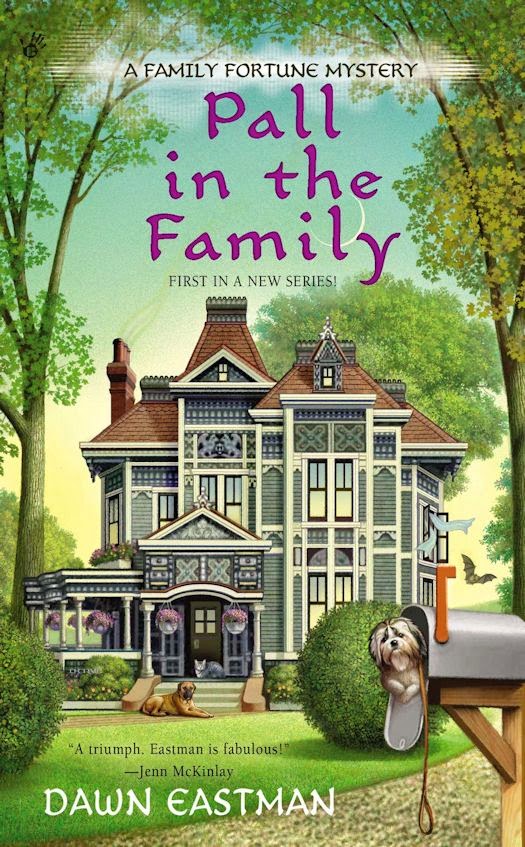 The aptly named Crystal Haven is the destination for tourists seeking psychics, séances, and the promise of contacting the spirit world. In this small western Michigan town, everyone knows the Fortune family. Rose is gifted with tarot card readings. Her sister, Vi, is a self-proclaimed pet psychic. And Rose’s daughter Clyde is…

A cop. A cop on leave from Ann Arbor, more specifically, who’s come home to kooky Crystal Haven to reevaluate her life. Mom and Aunt Vi can’t wait for Clyde to finally embrace her own psychic gifts and join the family business. Clyde would prefer the low-stress lifestyle of a dog walker and the low-key company of her nephew, Seth.

But when a local psychic is killed, leaving behind a traumatized Shih Tzu, it seems to be in the cards for Clyde to get involved. With her old flame Mac leading the investigation, that may prove awkward. Whether she uses her skills as a cop or her long-denied psychic abilities, it’s up to Clyde to divine a killer’s identity before someone else suffers more misfortune.


Be Careful What You Witch For
A Family Fortune Mystery 2
Berkley, July 1, 2014
Mass Market Paperback and eBook, 304 pages 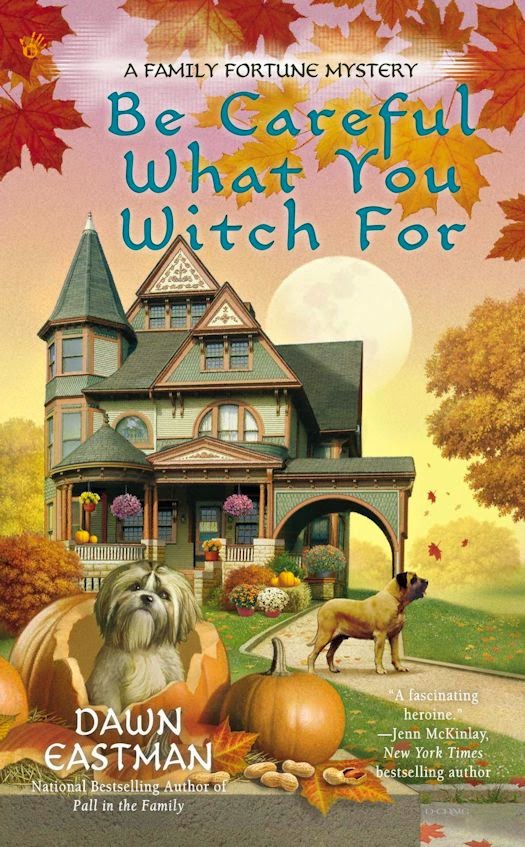 Leaving a traumatic police career behind, Clyde Fortune has returned to her seemingly quiet hometown of Crystal Haven, Michigan. In spite of the psychic powers of its residents, there’s no telling what trouble is brewing in this burg…

The highlight of this year's fall festival in Crystal Haven is a bonfire with a witch’s cauldron resting over it. Clyde’s best friend, Diana, leads a ritual to divine the future, but it seems no one foresees that one of their own will drop dead—or that Diana will be a prime suspect.

Clyde already has her hands full with her eccentric family, runaway nephew, and burgeoning secret romance with a hunky homicide detective. But after another coven member is attacked, Clyde suspects there’s a witch hunt afoot and focuses her psychic and sleuthing skills to clear her friend’s name and catch a killer. 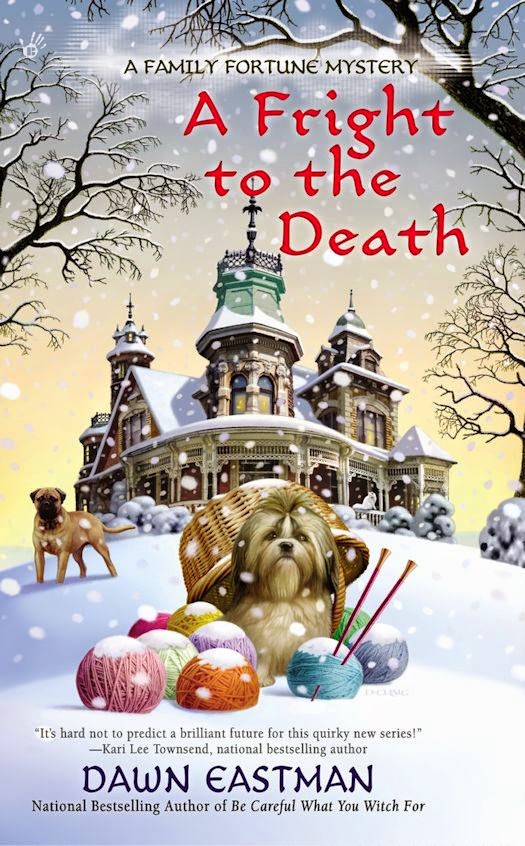 From the author of Be Careful What You Witch For, here is the newest Family Fortune Mystery, starring former cop Clyde Fortune, who—snowbound with her kooky family in a creepy castle—is climbing the walls and combing the halls, looking for a cold-blooded killer…

After their flight to Mexico is cancelled, Clyde and her detective boyfriend, Mac, end up snowed in with their families at a supposedly haunted hotel. Clyde’s tarot card reading mother, Rose, is making dire predictions for the weekend, and self-proclaimed pet psychic Aunt Vi is enchanted by the legend of the hotel’s ghost—until the power goes out and a body turns up.

With a hotel full of stranded suspects, Clyde will have to draw on all her skills—both the police ones she’d rather forget and the psychic ones she’d rather ignore—to solve the bone-chilling mystery before someone else gets iced… 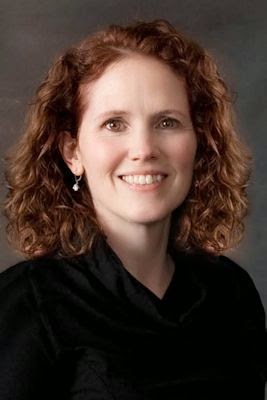 When I was ten years old, my two favorite things were climbing trees and reading. As a bonus, I discovered if I combined the two, I could hide from my mother when she wanted me to clean my room. Nancy Drew and I spent many afternoons solving crimes and avoiding chores. Eventually, I moved on to Hercule Poirot, Sherlock Holmes, and Stephanie Plum. I improved my housework-dodging ploys.

After many years in Michigan, I now live in Iowa with my husband, son and daughter. When I'm not writing or chauffeuring kids, I keep busy catering to the whims of a bossy bichon-shih tzu mix who wants to rule the world.