The impetus for this story was the following image and the facts behind it:


This poster was made from a photograph of Amanda Polchies, a Mi’kmaq woman who held up an eagle feather in front of a line of RCMP at a Canadian fracking protest, seemingly keeping them at bay. “What if,” we thought, “The feather really had power?”

Of course, that wasn’t a story by itself, and certainly not a Mech one. But we didn’t stop there. What if the Earth itself decided that fracking needed to be stopped? What if it took a mobile, active form and rose up against the oil rigs and the drilling tearing it apart? And what if the power that feather – and whoever held it – had was the power to control the vengeful Earth?

That was the essence of the tale we came up with, but no good story is that cut and dried. They’re usually a combination of new and old ideas, mixed together in an author’s (or two authors’) brainstew until something original and uniquely them rises to the top. So it was with “A Single Feather.”

Environmental causes have always been near and dear to both of us, but for Jeff, it runs in the family. His, brother, Michael Mariotte, is the president of NIRS, the Nuclear Information and Resource Service, an activist organization that seeks a nuclear-free planet and a sustainable energy future for us all. Recently, Michael was honored in Washington, DC for his decades of effort with the organization, and we were there. We saw dozens of old pictures of Michael (for whom the character, Michael Turcotte, is named) protesting – and being arrested – at nuclear plants around the county.

Those images combined with the image of Amanda Polchies to give us the character behind the story – an idealistic Native American protester and her more pragmatic and cautious boyfriend (and, of course, instigator Michael).

During the time we were stewing over and planning the story, it seemed that an oil-train bomb was exploding every week, somewhere around the country. Most of these traveling disasters originated in the Bakken formation of North Dakota, where a major oil boom was underway (a boom that has since gone bust, as every energy boom does—a casualty of the plummeting price of oil).

One of the worst—and presumably a major influence in the decision of Amanda Polchies and others to protest at Elsipogtog First Nation in New Brunswick, Canada—took place in Lac-Mégantic in Quebec Province, Canada. On July 6, 2014, a 74-car train carrying Bakken crude derailed and rolled downhill into Lac-Mégantic’s downtown. The crash and explosion killed 47 people. Of the buildings in the small city’s downtown area, more than half were destroyed outright; all but three of those that remained were condemned and slated for destruction due to oil contamination.

There was a city there, where people lived and worked and shopped and laughed and dreamed, and then there wasn’t. Amanda and her fellow protesters saw that happen and didn’t want it to happen where they lived, or where anybody else lived. They wanted to call attention to the rate at which runaway carbon consumption is making our world a more dangerous place. They wanted us to think about what we’re doing, and how we’re doing it, and to start making decisions about our actions that take such considerations into account.

Amanda stopped a line of armed men with a single eagle feather and a well of courage most of us will never know. In our story, Bree Little Feather displays bravery, too, and her courage animates a much more powerful force—a Mech of a different type than most we expect to be found in the anthology—to carry out her will. And then some.

We’re delighted that the book exists (or will soon, anyway), because who doesn’t love giant robots? But we’re also thrilled to have been given the opportunity to write this story, to pay some distant tribute to the real heroes, the Amandas and the Michaels who work and fight and cajole and testify on behalf of people everywhere and the planet we all share. Their efforts give voice to the powerless.

But sometimes, the Earth speaks for itself. 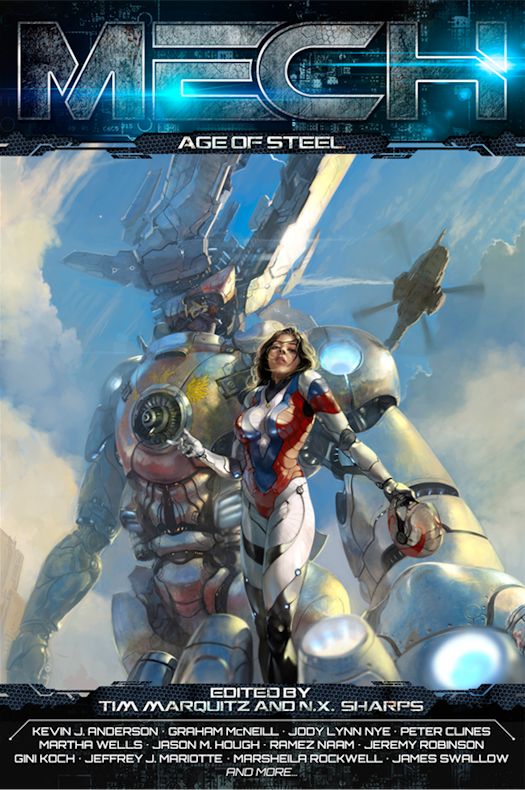 MECH: Age of Steel is a collection of 24 mecha-inspired short stories in the spirit of Pacific Rim, Macross, Transformers, Robotech, Gundam, Evangelion, and more. MECH features a vast array of tales featuring giant, human-piloted, robot war machines wreaking havoc in blasted cities, or on dystopian landscapes, or around space stations and asteroids against a cosmic backdrop, or wherever, you-name-it!

MECH is anchored by authors such as Kevin J. Anderson, Ramez Naam, Jason Hough, Jeremy Robinson, and Jody Lynn Nye. This anthology features illustrations for every story and is the perfect companion to its sister title, Kaiju Rising: Age of Monsters. So strap in. Activate your interface array. Let's rock! 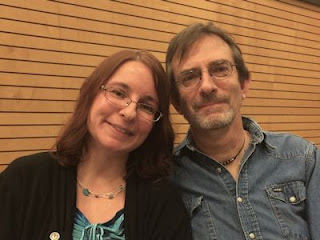 Soon-to-be husband and wife team Marsheila (Marcy) Rockwell and Jeffrey J. Mariotte have written more than 60 novels between them, some of the most recent of which are The Shard Axe series and a trilogy based on Neil Gaiman's Lady Justice comic books (Rockwell) and Empty Rooms and Season of the Wolf (Mariotte). They’ve also written dozens of short stories, separately and together. Some of their solo stories are collected in Nine Frights (Mariotte) and Bridges of Longing (Rockwell). Their published or soon-to-be-published collaborations include the novel 7 SYKOS and short works “A Soul in the Hand,” “John Barleycorn Must Die,” “V-Wars: The Real HousewiVes of Scottsdale,” and “The Lottons Show.” Other miscellaneous projects include Rhysling Award-nominated poetry (Rockwell) and Bram Stoker Award-nominated comic books (Mariotte). More complete bibliographies and news about upcoming projects, both collaborative and solo, can be found at marsheilarockwell.com and jeffmariotte.com.