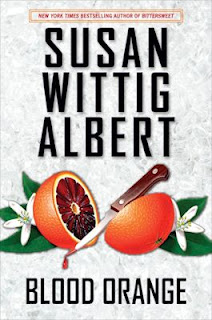 This year marks the publication of the 24th China Bayles mystery, Blood Orange. Gosh—it seems like yesterday when the first book, Thyme of Death, came out. But that was way back in 1992, the same year that Bill Clinton became president, Hurricane Andrew bulldozed across South Florida, and Clint Eastwood’s Unforgiven cleaned up at the Oscars. To tell the truth, I never imagined that China and Ruby would be still be sleuthing, 24 books later. But I’m glad they are, for they’ve given me, as their partner-in-crime, many wonderful (and challenging) hours of writing fun.

Back in the day, those early China Bayles mysteries broke some new ground. For one thing, regional mysteries were fairly new to readers, and I was a little worried that a small town in the Texas Hill Country might not be appealing. What’s more, China was a shop owner, an herbalist, and a gardener, the first of her kind in the U.S. (British mystery author John Sherwood had already written several books in his Celia Grant horticultural series but there were none in America.) China’s mysteries were also among the first to feature recipes (Diane Mott Davidson began doing this at about the same time). And China Bayles herself was the first ex-lawyer (a criminal attorney) coupled with an ex-cop boyfriend/husband.

To my mind, it was China’s background as a lawyer that made her different from other female amateur sleuths—and still does. She’s had experience with lots of different bad guys, which gives her an eye for criminals and a pretty strong sense of who isn’t telling the truth. She knows the law and is trained to spot the ways people—both bad guys and good—use the legal system to their advantage. Her relationship with Mike McQuaid has given her an insight into the way cops and professional investigators think and work, and her friendship with Sheila Dawson, Pecan Springs’ first female chief of police, provides a strong connection to local law enforcement. On the other hand, her longtime friendship with highly-intuitive slightly-wacky Ruby Wilcox gives her a different view of what’s going on.

All these elements stir up a rich stew of plot possibilities for every China Bayles adventure, and Blood Orange is no exception. I had fun playing with the possibilities of blood oranges for food and drink—and the unexpected discovery that blood oranges are used in artisanal beer gave me a clue to an important plot thread. But it’s China’s background as a lawyer that makes the Blood Orange plot so complex. When she unearths some fraudulent doings in the local hospice, her legal experience helps her find a murder that has been buried so deep that even the cops can’t find it.

But even though China is very smart and experienced, it’s often Ruby who gets her out of a really tight situation. I had a lot of fun writing the scene near the end of the book where China gets locked in the villain’s garage and Ruby—

But I don’t want to spoil your fun, so I’ll just invite you to pour a cup of tea, grab a handful of your favorite cookies (maybe Ruby’s Hot Lips Cookie Crisps), and settle in with Blood Orange. It has all the elements that make China Bayles a true Texas original: an amateur sleuth with a green thumb and a serious nose for prime-thyme crime. I hope you enjoy it! 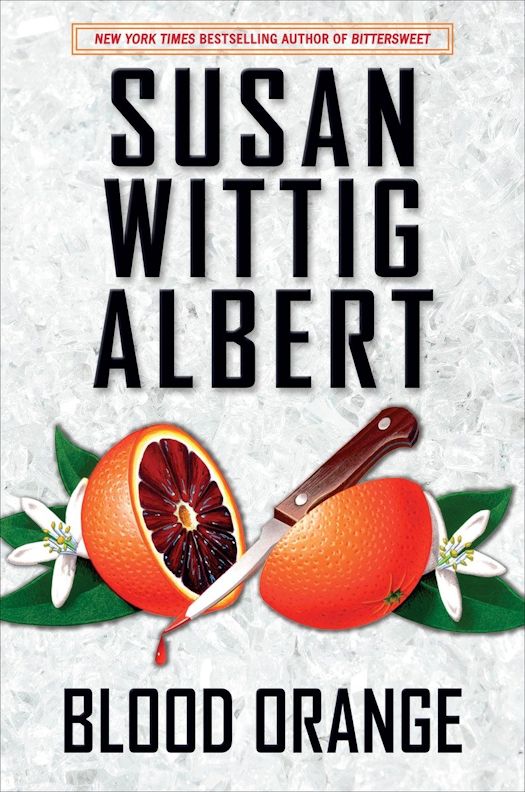 In the newest China Bayles Mystery in the New York Times bestselling series, China comes to the aid of a nurse who ends up in the hospital…

It’s mid-April in Pecan Springs, and China is renting her guest cottage to Kelly Kaufman, who needs a temporary place to live as she contends with a very acrimonious divorce from her husband Rich. One nasty point of dispute is her part ownership of the Comanche Creek Brewing Company, which she is refusing to sell.

At the same time, as a nurse employed by a local hospice, Kelly has discovered instances of suspicious practices. Even more disturbing, she suspects that a patient was murdered. Kelly’s knowledge could be dangerous, and she wants to get guidance from China on what to do.

But on her way to China’s house, Kelly is forced off the road and critically injured, putting her in a medically induced coma. Now it’s up to China to determine who wanted her out of the picture. Was it her soon-to-be ex? His new lover—who happens to be the sister of China’s friend Ruby? Or someone connected with the corruption at the hospice?

China is a wonderful character who has developed into full realness over the course of the series. She is practical and methodical and cautious in all she does, but still manages to get into the thick of things when something of an illicit nature happens around her. She is almost always joined by her faithful family and friends. Mike McQuaid is China’s husband, former homicide detective turned private investigator. Mike plays a small role in this mystery, but figures heavily into the sub plot revolving around China’s personal life and worries. Ruby Wilcox is outlandish, intuitive and imaginative, basically China’s polar opposite, but also her best friend and business partner. Ruby’s psychic gifts often give China a push in the right direction when she’s searching for a killer. Even though China doesn’t understand the supernatural, she has learned to listen when Ruby cautions her of coming danger. Rounding out China’s usual gang are married couple Blackie Blackwell and Sheila Dawson. Blackie is a former sheriff and McQuaid’s investigator partner and Sheila is the petite but powerful chief of police, and China’s other best friend.

Pecan Springs is filled with small town charm and hosts plenty of eccentric and delightful residents, many of whom have featured in previous novels, and others who are introduced to power the mystery in this installment. Ramona, who has made appearances in the past, is Ruby’s flighty and self-centered sister. Ramona manages to get herself entangled in the murder this time around by being the “other woman” in the marriage of the victim, Kelly Kaufman. Kelly, a former hospice nurse and acquaintance of China’s, is killed while staying at China’s small rental cottage on the property of her herb shop. Kelly, who is going through a divorce, also has other motives for hiding out in China’s cottage that are revealed throughout the course of the book and prove to be integral to the plot. Kelly’s estranged husband Rich and her best friend Lara Metcalf are also new characters who have important roles in the mystery. Other newcomers include Marla Blake, Kelly’s former boss at the hospice, her son, Dr. Christopher Burgess, and Janet Parker, a hospice employee and customer at China’s Thyme and Seasons Herb Shop.

Old friends also play pivotal roles in the storyline, including Charlie Lipman, Jessica Nelson, and Mr. Cowan and his tiny Peke, Lula. Charlie is a local attorney and friend to China, who has helped her in the past and also utilizes the investigative services of McQuaid and Blackie on a regular basis. Charlie figures into the plot as Kelly’s lawyer. Jessica Nelson is a sweet, young, and eager local reporter who has crossed paths with China and her sleuthing in the past and is willing to help China again, in exchange for an exclusive story, of course. Mr. Cowan is a cantankerous old man who lives next door to China’s businesses. He and his noisy dog, Lula, have set themselves up as a sort of neighborhood watch. Mr. Cowan rarely misses a chance to complain to China about noise or people, but in this case, provides some important information that helps China early on in the story.

One of the most interesting aspects of a China Bayles mystery is the way the author seamlessly weaves herbs into the stories. Each chapter is headed with a snippet of herbal lore that is relevant to the title and theme of the book, as well as the particular chapter it fronts. These chapter heads blend together the plot of the mystery and the core theme of China’s life, her love of herbs and gardening, in a way that is entertaining and informative. There are also delicious sounding recipes included at the end of the book that tie in with the herbal theme. Little touches like these add depth to the book, making the storyline flow throughout the novel. The main mystery and subplots in Blood Orange intertwine in intriguing ways and are all fully resolved by the last page, as they are in any book in the series. The characters are always completely drawn and highly relatable, and China herself becomes something of an old friend with each new novel. Although Pecan Springs is a fictional town, it is a place that readers will find themselves longing to visit. I always look forward to a new China Bayles mystery and will continue to do so for however long the author is kind enough to share her beloved characters with us.

What:  One entrant will win a copy of Blood Orange by Susan Wittig Albert from the publisher. US ONLY

Who and When:  The contest is open to all humans on the planet earth with a US mailing address. Contest ends at 11:59 PM US Eastern Time on May 3, 2016. Void where prohibited by law. No purchase necessary. You must be 18 years old or older to enter.