Please welcome Thomas Olde Heuvelt to The Qwillery as part of the 2016 Debut Author Challenge Interviews. HEX was published on April 26th by Tor Books. 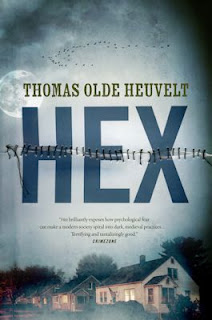 Thomas:  Thank you. I finished my first short story when I was ten. Before that, I had started about a thousand, but then a buddy would ring the doorbell and ask me out to play soccer or climb roofs or set fire to some boxes (or all three at the same time) and I would forget about the story. But that first finished story was a present to my grandmother’s birthday at Christmas. It was a kind of sci-fi Christmas Carol, featuring me and my sister in Bethlehem in the year 3.000, and we had to save our grandmother from the hospital as she was giving birth to the AntiChrist. It’s been a while, so I can't really judge it on its literary merits.

Thomas:  I'm one of those writers that like to plot a lot. But of course, as you’re writing, your subconscious takes over and comes up with all these little (and sometimes big!) surprises that are way, way better than you could ever have cooked up rationally. So you go with that. And that is a good thing.

Thomas:  Mostly, setting time aside to actually do it! The success of HEX has been overwhelming. After it did very well in Holland and Belgium, it has now sold to countries all over the world, and Warner Bros. is developing a pilot for a TV series. It’s all fantastically wonderful, but it took a lot of my time. I worked closely together with the translator on the English version of the book, and then there are events and promo and all sorts of other stuff that comes my way. What works for me is if I lock myself in some place abroad, to be socially secluded for a period of time in order to focus on writing the new book. I have family in northern Thailand and in the Swiss Alps, and they’re kind enough to let me use their houses every now and then, as long as all the nasty little things I cook up happen in the books, not in their house.

Thomas:  Reading as many good books as I can. And then write the best book that I would want to read myself.

Thomas:  This book will haunt you in your sleep. Guaranteed. Mwuhaha.

TQ:  Tell us something about HEX that is not found in the book description.

Thomas:  Although it’s a horror novel and it turns pretty dark, it is actually also a very humorous book. I just love the scene where Griselda Holst, the butcher woman, tries to think of a sacrifice she would like to make for Katherine (the witch), in order to stay on her good side. She has a habit of sacrificing pâté to her, and now has raised the stakes with a pig's head, so she really has to come up with something good this time. Except it needs to fit in a big shopping bag, as she doesn’t want the townsfolk to find out about what she is doing. So she comes up with the idea of a living peacock. Except, she first has to catch a living peacock. And the witch is just staring at her, behind those stitched-up eyes...

TQ:  What inspired you to write HEX? What appeals to you about writing Horror?

Thomas:  I wanted to write a story about a witch ever since I was traumatized by Roald Dahl's book The Witches, and the 1990 movie adaptation of it. The moment when Anjelica Huston, the Grand High Witch, takes off her mask... gosh, I was seven years old, and I didn’t trust any women for the next six months. Imagine what my winter was like, with women wearing gloves all the time. I saw witches everywhere. Then I watched The Blair Witch Project when I was fifteen, and of course, the scary part there was that you did not see the witch. Katherine van Wyler, the witch in HEX, has influences of both. Of course she has this horrible, disfigured face because her mouth and eyes are sewn shut... but for exactly the same reason, you never really get to see her. If you can’t see someone's eyes, you'll never know what they are thinking. That makes her so scary.

As for horror in general: it’s just a quirk. As a kid I used to collect model airplanes. You know, the ones you have to glue together from scratch, then paint all the way. It took me days. When it was done, I took a sledgehammer and crushed the plane right through the middle. I burned the edges with matches and used burnt cloth and wrinkled aluminium foil to simulate wreckage. Then I placed my toy ambulances around the crash scene and showed it to my mom. I was, like: Tadaaaa! She wasn’t amused. I guess it proves that I’ve always been drawn to the dark side of things. But at least I never poked the eyes out of my teddy bears.

TQ:  What sort of research did you do for HEX?

Thomas:  Mostly stuff about the witch craze in the seventeenth century, about superstitions and about omens. Did you know there is actually an Oxford Dictionary of Superstitions? So cool. Also, I did a lot of research about the Hudson Valley area where the book is set, which has a lot of Dutch history. I am from the Netherlands, and although I’ve visited the area many times and I used to live in Ottawa (I was a uOttawa student!), you still want to make sure you get everything right. But both the translator and the editor lived in the Hudson Valley for years, so they were both of great help.

TQ:  Why have you chosen to include social issues in HEX?

Thomas:  I thought it was a much more frightening idea if the real evildoers in the book are the townsfolk themselves, not the witch. The novel is a parable about mankind’s depravity and the depths of evil of which we are capable. When things go bad in Black Spring, hidden tensions and human weakness trigger a whole other kind of witch-hunt that boils over into persecution and scapegoating, with shocking consequences. I wanted to show that even today, little truly separates us from the time when we really used to persecute people on the grounds of our primal fears like witchcraft. And we have a lot of primal fears in our society at the moment...

TQ:  Which question about HEX do you wish someone would ask? Ask it and answer it!

Thomas:  I guess it would be the obvious one, once you've read it: So who was it, at the front door? And of course, I'm not gonna tell! Or maybe: Do you really believe people are so messed-up they would react this way? And I'd say: yes, I'm afraid so. As soon as you'll pull the carpet of normality from underneath us, we start to crumble.

TQ:  Give us one of your favorite non-spoilery quotes from HEX.

Thomas:  I love this bit, as it tells so much about these people: "Theo Stackhouse, who had been a garage owner and car mechanic the week before, eagerly accepted the office of town executioner and was summoned to the stables of the councilman's estate on Wednesday night. He practiced first on a leather saddle, to master the art of flogging, and then on a floundering, bound calf, to prepare himself for the reflex of living flesh. That night before he went to bed he took two Advils for the intense aches in his upper arm, but despite the pain, he slept like a baby."

Thomas:  I tremendously look forward to the reception of HEX in all the different countries where it will appear. This has always been a dream of mine and I've been working for years to realize it. Now people in China and Turkey and Canada and France and Serbia and many other countries are suddenly reading my work. In Holland, I've been getting so many messages from readers who told me they had to leave the lights on at night after finishing the book, in order to fall asleep. I wonder if it will have the same effect on people abroad. Also I'm going on tour in some of these countries, starting with a US tour in June and July. That's going to be special. 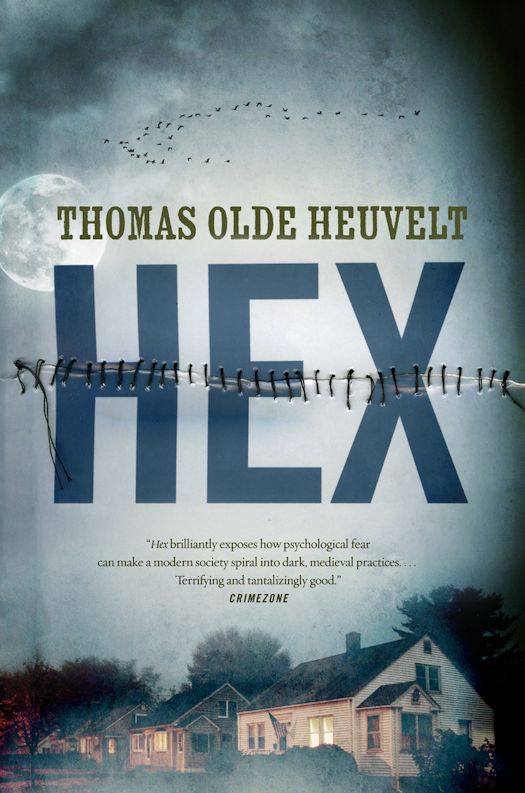 Whoever is born here, is doomed to stay 'til death. Whoever settles, never leaves.

Welcome to Black Spring, the seemingly picturesque Hudson Valley town haunted by the Black Rock Witch, a seventeenth century woman whose eyes and mouth are sewn shut. Muzzled, she walks the streets and enters homes at will. She stands next to children's bed for nights on end. Everybody knows that her eyes may never be opened or the consequences will be too terrible to bear.

The elders of Black Spring have virtually quarantined the town by using high-tech surveillance to prevent their curse from spreading. Frustrated with being kept in lockdown, the town's teenagers decide to break their strict regulations and go viral with the haunting. But, in so doing, they send the town spiraling into dark, medieval practices of the distant past.

This chilling novel heralds the arrival of an exciting new voice in mainstream horror and dark fantasy. 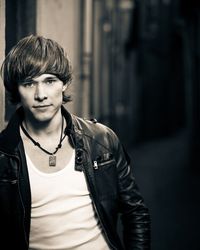 Born in 1983, Thomas Olde Heuvelt is the much praised Dutch author of several novels and many stories of the fantastic. BBC Radio called Thomas "One of Europe's foremost talents in fantastic literature." Olde Heuvelt is a multiple winner of the Paul Harland Award for best Dutch Fantasy. His story "The Boy Who Cast No Shadow" received the Honorable Mention in the Science Fiction & Fantasy Translation Awards.