Excerpt from Children of Earth and Sky by Guy Gavriel Kay


The Qwillery is thrilled to share with you an excerpt from Guy Gavriel Kay's Children of Earth and Sky which will be published by NAL on May 10th. 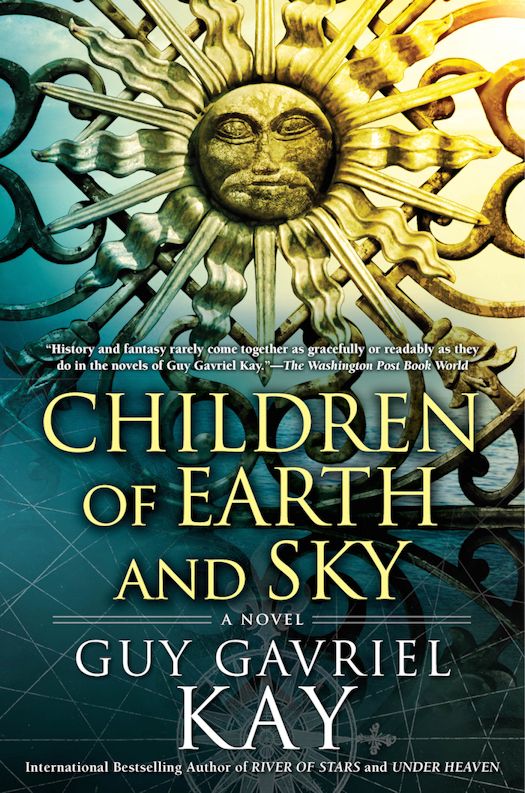 The bestselling author of the groundbreaking novels Under Heaven and River of Stars, Guy Gavriel Kay is back with a new book, set in a world inspired by the conflicts and dramas of Renaissance Europe. Against this tumultuous backdrop the lives of men and women unfold on the borderlands—where empires and faiths collide.

From the small coastal town of Senjan, notorious for its pirates, a young woman sets out to find vengeance for her lost family. That same spring, from the wealthy city-state of Seressa, famous for its canals and lagoon, come two very different people: a young artist traveling to the dangerous east to paint the grand khalif at his request—and possibly to do more—and a fiercely intelligent, angry woman, posing as a doctor’s wife, but sent by Seressa as a spy.

The trading ship that carries them is commanded by the accomplished younger son of a merchant family, ambivalent about the life he’s been born to live. And farther east a boy trains to become a soldier in the elite infantry of the khalif—to win glory in the war everyone knows is coming.

As these lives entwine, their fates—and those of many others—will hang in the balance, when the khalif sends out his massive army to take the great fortress that is the gateway to the western world…

Here is a passage from early in the book, introducing one of the central characters and the setting in which she lives. For now.

Excerpted from Children of Earth and Sky, © Guy Gavriel Kay, 2016.

He wasn't going to say he loved her or anything like that. That wasn't the way the world went on Hrak Island. But Danica Gradek did drift into his dreams too often for peace of mind, and had done so for a while now. On the island and in Senjan there were women who interpreted dreams for a fee. Mirko didn't need them for these.
She was unsettling, Danica. Different from any of the girls on Hrak, or in the town when he made his way across to trade fish or wine.
You had to trade very cautiously these days. Seressa had forbidden anyone to deal with the pirates this spring. There were war galleys here. You'd be flogged or branded if caught, could even be hanged, depending on who did the catching and how much your family could afford in bribes. Seressa almost certainly had spies in Senjan, too, so you needed to be careful that way, as well. Seressa had spies everywhere, was the general view.
Danica was younger than him but always acted as if she were older. She could laugh, but not always when you'd said something you thought was amusing. She was too cold, the other men said, you'd freeze your balls making love to her. They talked about her, though.
She handled a bow better than any of them. Better than anyone Mirko knew, anyhow. It was unnatural in a woman, wrong, ought to have been displeasing, but for Mirko it wasn't. He didn't know why. Her father, it was said, had been a famous fighter in his day. A man of reputation. He'd died in a hadjuk village raid, somewhere on the other side of the mountains.
Danica was tall. Her mother had been, too. She had yellow hair and extremely light blue eyes. There was northern blood in the family. Her grandfather had had eyes like that. He'd been a scary figure when he came to Senjan, scarred and fierce, thick moustaches, a border hero of the old style, men said. He was the one who'd taught his granddaughter how to handle a bow and knives.
She'd kissed him once, Danica. Just a few days ago, in fact. He'd been ashore south of the town walls with two casks of wine before dawn, thin blue moon setting. She and three others he knew had been waiting on the strand to buy from him. They'd used torches to signal from the beach.
It happened he had learned something not long before and—on an impulse—he'd asked her to walk a little away from the others. There had been jokes made, of course. Mirko didn't mind, she hadn't looked as if she did. It was hard to read her moods and he wouldn't claim to be good at understanding women, anyhow.
He told her that three days earlier he'd been part of a group supplying the war galley in the northern channel. He'd overheard talk about sending a boat to fire the Senjani ones drawn up on the strand. Bored men on ships, especially mercenaries, could grow careless. He said if it were him doing it, he'd do it on a no-moons night. Of course, she said.
He thought if she was the one he told she could reap the benefit of reporting the tidings to the raid captains inside the walls and she'd be happy with him for that.
Danica Gradek kissed really well, it turned out. Fiercely, even hungrily. She wasn't quite as tall as he was. He wasn't sure, remembering the moment, if it had been passion, or triumph, or the anger everyone said was in her, but he'd wanted more. Of the kiss, of her.
“Good lad,” she said, stepping back.
Lad? That he didn't like. “You'll warn the captains?”
“Of course,” she said.
It never occurred to him she might be lying.

Guy Gavriel Kay is the international bestselling author of twelve previous novels and a book of poetry. He has been awarded the International Goliardos Prize for his work in literature of the fantastic and won the World Fantasy Award for Ysabel in 2008. In 2014 he was named to the Order of Canada, the country’s highest civilian honor. His work has been translated into more than twenty-five languages.