An Interview with Ian Doescher

Tracey / Trinitytwo caught up with Ian Doescher at New York Comic Con last year. Ian is the author of the William Shakespeare's Star Wars® series, which number six volumes. In honor of the Bard, we give you an interview with Ian Doescher. 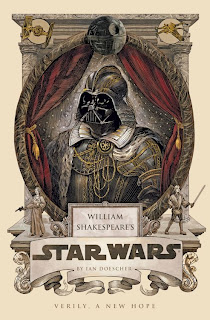 Return once more to a galaxy far, far away with this sublime retelling of George Lucas’s epic Star Wars in the style of the immortal Bard of Avon. The saga of a wise (Jedi) knight and an evil (Sith) lord, of a beautiful princess held captive and a young hero coming of age, Star Wars abounds with all the valor and villainy of Shakespeare’s greatest plays. ’Tis a tale told by fretful droids, full of faithful Wookiees and fearstome stormtroopers, signifying...pretty much everything.

Reimagined in glorious iambic pentameter—and complete with twenty gorgeous Elizabethan illustrations--William Shakespeare’s Star Wars will astound and edify Rebels and Imperials alike. Zounds! This is the book you’re looking for. 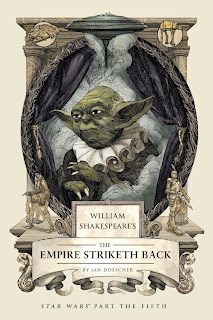 The saga that began with the interstellar best seller William Shakespeare’s Star Wars continues with this merry reimagining of George Lucas's enduring classic The Empire Strikes Back.

Many a fortnight have passed since the destruction of the Death Star. Young Luke Skywalker and his friends have taken refuge on the ice planet of Hoth, where the evil Darth Vader has hatched a cold-blooded plan to capture them. Only with the help of a little green Jedi Master—and a swaggering rascal named Lando Calrissian—can our heroes escape the Empire's wrath. And only then will Lord Vader learn how sharper than a tauntaun's tooth it is to have a Jedi child.

What light through Yoda's window breaks? Methinks you'll find out in the pages of The Empire Striketh Back! 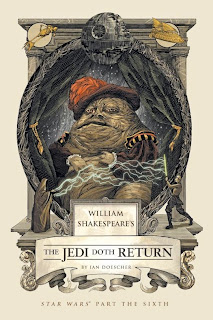 Illustrated with beautiful black-and-white Elizabethan-style artwork, these two plays offer essential reading for all ages. Something Wookiee this way comes! 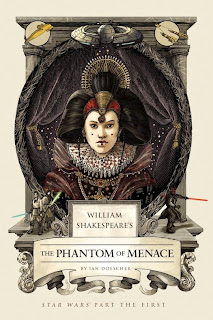 Join us, good gentles, for a merry reimagining of Star Wars: episode 1 as only Shakespeare could have written it. The entire saga starts here, with a thrilling tale featuring a disguised queen, a young hero, and two fearless knights facing a hidden, vengeful enemy.

’Tis a true Shakespearean drama, filled with sword fights, soliloquies, and doomed romance . . . all in glorious iambic pentameter and coupled with twenty gorgeous Elizabethan illustrations. Hold on to your midi-chlorians:  The play’s the thing, wherein you’ll catch the rise of Anakin! 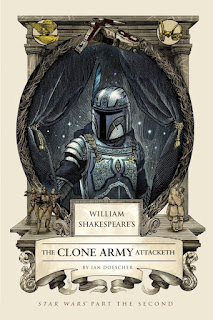 In time so long ago begins our play,
In clash-strewn galaxy far, far away.

To Shmi or not to Shmi? Torn between duty to the Jedi, attraction to Padmé, and concern for his beloved mother, yeoman Jedi Anakin Skywalker struggles to be master of his fate. The path he chooses will determine not just his own destiny, but that of the entire Republic. And thereby hangs a tale.

Alack the day! A noble lady in danger. A knight and squire in battle. And a forbidden love that’s written in the stars. Once again, the quill of William Shakespeare meets the galaxy of George Lucas in an insightful reimagining that sets the Star Wars saga on the Elizabethan stage. The characters are familiar, but the masterful meter, insightful soliloquies, and period illustrations will convince you that the Bard himself penned this epic adventure. 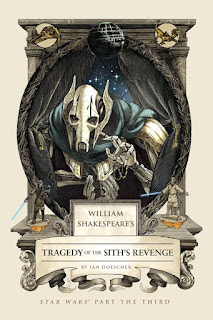 The curtain rises once again on that star-crossed galaxy far, faraway—this time, to chronicle a once-heroic knight’s transformation into the darkest of villains. William Shakespeare’s Tragedy of the Sith’s Revenge is the climactic conclusion to the fall of the house of Skywalker, a collaboration between William Shakespeare and George Lucas that’s filled with masterful meter, stirring soliloquies, inside jokes, and intricate Elizabethan illustrations. You’ll fall in love with Star Wars—and Shakespeare—all over again. At the same time!