Guest Blog by Bec McMaster - I need a hero…

Please welcome Bec McMaster to The Qwillery as part of the 2012 Debut Author Challenge Guest Blogs. Kiss of Steel (London Steampunk 1) will be published on September 4, 2012. 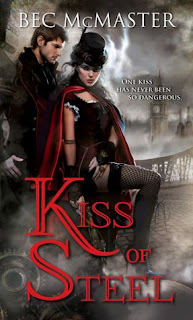 I need a hero…

Everybody has their favourite sort of hero. For some it’s a dashing duke or a dangerous rake, for others it’s a prince in disguise. But for me, it’s always been the diamond in the rough.

From Buffy’s Spike or Derek Craven from Lisa Kleypas’s Dreaming of You or even Disney’s Aladdin, I’ve always had a soft spot for the type of hero who’s had to fight the odds his entire life. He might not be educated. He might not even be literate, but he’s got the kind of street smarts and roguish charm that can win even the most hardened heart, and he’s more than prepared to do it.

When I wrote Kiss of Steel, my hero Blade came into my head fully formed, whispering in my ear with that delicious Cockney accent. Dressed in gaudy velvet waistcoats and defiantly himself, Blade doesn’t give a damn what others think of him. He knows who he is and he’s proud to be that way.

In my steam-fuelled Victorian world, Blade’s master of his own destiny, determined to defy the aristocratic blue blood Echelon who rules London and protect the little ‘family’ he’s managed to form. Alpha enough to rule the rookery of Whitechapel and just ruthless enough to keep it, he’s also hiding a heart of gold beneath that roughened exterior. He has his own dark secrets too. But what hero doesn’t?

Of course, every hero needs a heroine who’s his match, and who better than strait-laced Honoria Todd, on the run from a monster from Blade’s past? She could be his perfect revenge against the Duke of Vickers or his ultimate salvation.

When Honoria comes into his life, Blade’s not looking for love – but when he realises what he feels, he’s going to fight for it, tooth and nail. Not so easy when my heroine had other ideas of course, but that’s all part of the fun. I love a hero who has to work for what he wants.

So tell me… The upright hero just begging to have his hair mussed? The possessive alpha? Or even a self-made workaholic? What’s your favourite hero type – literary or otherwise - and why?

BLURB FOR KISS OF STEEL

EXCERPT FROM KISS OF STEEL

To give this a little context, the first time Honoria meets Blade he offers her protection from the dangers of the rookery… for a price. Honoria’s response is to draw her pistol to prove that she’s not without protection:


There was a blur of movement and something grabbed her from behind. Honoria gasped, the knife a sharp warning against her throat as he drew her back against his hard body. Her chin tipped up and she swallowed hard, the blade hovering directly over her carotid. His arm was a steel band about her waist, hugging her close.

Blade’s lips brushed her ear. “Still not impressed,” he whispered.

The fire spat. Her wide eyes took in the room: the cheroot sitting in the ash tray and still smoking: the abandoned cat giving them a disgruntled look from the floor as it turned and sauntered away: and the long stretch of shadow that showed them locked together in a parody of an embrace.

“Put it down, luv,” he said. “And don’t ever draw on me again unless you intend to use it.”

Honoria lowered the pistol. “I was proving a point. I didn’t bother to cock it.”

“Just as I were provin’ my point,” he replied in that husky whisper. His cool breath stirred the curls at her throat, pebbling her damp skin. “Who do you think won?”

“I may have been... somewhat precipitous,” she admitted.

His hand slid along hers, closing over her fingers. “Give it to me.”

No. Honoria shut her eyes and took a deep breath. She forced her fingers to relax. To let him take the smooth weight of the pistol.

He thumbed open the barrel and examined the shot inside with a soft grunt. “What the bleedin’ devil are you usin’ for rounds?”

“Firebolts,” she replied. “My father designed them.” And then she shut her mouth. He didn’t need to know anything about her father. It was safer that way.

Vickers still had a price on her head and who knew what this man would do for that much money?

Blade snapped the pistol barrel back into place, then tucked it away somewhere on his person. The razor-edge against her throat kept her locked in place. The pressure was perfect. She couldn’t move an inch, but it hadn’t broken the skin either.

Then suddenly it eased. Honoria took a deeper breath, her head spinning with the sudden rush of oxygen into starved lungs. With the knife gone, other impressions started leeching into her. The hard body imprinted against hers, separated only by the thickness of her bedraggled bustle. The press of his belt buckle, tugging at the fabric of her skirts. And the sound of his breathing, quickening just slightly.

His arm slid around her waist again. “And now you’re disarmed. And at me mercy. Now what do you do, Miss Todd?” 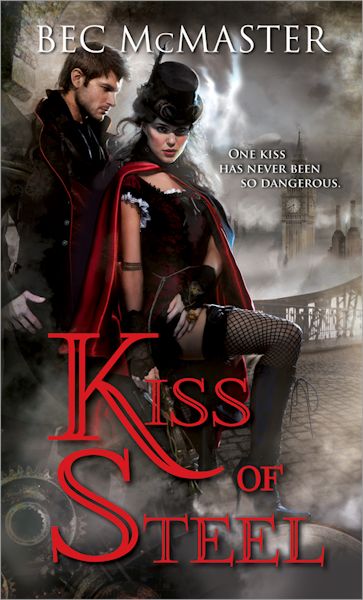 When Nowhere is Safe

Most people avoid the dreaded Whitecapel district. For Honoria Todd, it's the last safe haven. But at what price?

Blade is known as the master of the rookeries—no one dares cross him. It's been said he faced down the Echelon's army single–handedly, that ever since being infected by the blood–craving he's been quicker, stronger, and almost immortal.

When Honoria shows up at his door, his tenuous control comes close to snapping. She's so...innocent. He doesn't see her backbone of steel—or that she could be the very salvation he's been seeking. 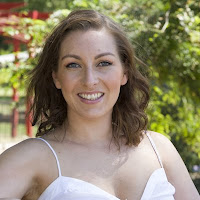 Bec McMaster writes romance novels featuring red-hot alpha males, kick-ass heroines and edge-of-your-seat adventures. When not writing, reading, or poring over travel brochures, she loves spending time with her very own hero or daydreaming about new worlds. Her debut steampunk romance, Kiss of Steel, is available Sept, 2012, from Sourcebooks. Read more about her at www.becmcmaster.com, or follow her on twitter @BecMcMaster.

What:  One commenter will win a copy of Kiss of Steel (London Steampunk 1) from The Qwillery. Please note that the winner will not receive the novel until after it is released in September.


The upright hero just begging to have his hair mussed? The possessive alpha? Or even a self-made workaholic? What’s your favourite hero type – literary or otherwise - and why?
Please remember - if you don't answer the question your entry will not be counted.

Who and When:  The contest is open to all humans on the planet earth with a mailing address. Contest ends at 11:59pm US Eastern Time on Tuesday, August 28, 2012. Void where prohibited by law. No purchase necessary. You must be 18 years old or older to enter.


*Giveaway rules are subject to change.*
Posted by Qwill at 7:48 AM