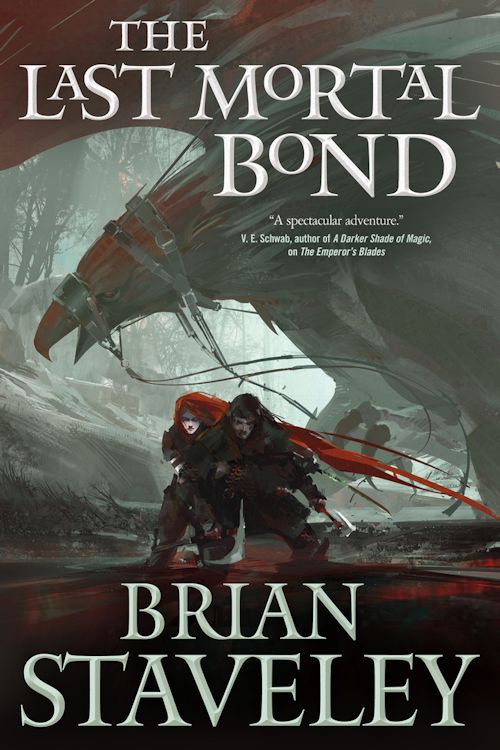 War is consuming the lands and people of Annur. The Csestriim, an ancient and immortal race, have orchestrated events intended to destroy the gods who have flawed their human children.

In the towering heights of Intarra's Spear, Kaden both protects and imprisons Triste, the human vessel for the goddess Ciena. To secure the goddess's ascension to heaven, Triste must willingly participate in a ritual that will free the goddess but extinguish her host's life.

The exiled Emperor Adare and her armies defend against the invasion by the savage race of nomads called Urghul who have rallied under the banner of the warrior, Long Fist. Adare has assumed many mantles since her father's murder; prophet, emperor, mother, murderer. In an effort to save her people she has appointed Csestriim Ran il Tornja as general of her armies. Adare doesn't trust il Tornja but his brilliant war tactics have proven the strongest defense against the legions of Urghul who are hell bent on slaughtering the Annurian race.

The Last Mortal Bond is the magnificent conclusion to a trilogy that is truly a masterpiece of epic fantasy. Brian Staveley has woven an intricate tale that spans the course of three books, culminating in a rich and breathtaking tapestry that is nothing short of perfection.

The Last Mortal Bond unfolds through four main points of view which allows for crucial character development while also revealing far flung events with real time urgency. Part of what makes this story powerful is the depiction of its main characters. Staveley portrays their flaws and strengths with brutal honesty which creates a tangible sense of empathy.

The balance between male and female characters is worth noting. I am impressed with the inclusion of multiple strong and heroic female characters who have major parts to play. Adare, stands out because of her bravery in the face of the unthinkable. Her desperate longing to protect her infant son while attempting to save her Empire resonated strongly with me. The choices she is faced with would break a lesser person. I also grew to love gruff Gwenna, and felt a tremendous sympathy for Triste. Look for Huutsuu, Pyrre and Sigrid as well; they kick major ass.

Staveley is an expert wordsmith. Throughout his detailed descriptions of battles, hand to hand combat, covert missions and other levels of human suffering, Staveley conjures images that are uniquely stark , utterly realistic and at times hauntingly beautiful. His ability to take seemingly minute elements and incorporate them into the greater story to produce a dense and satisfying work, rich in layers and complexities is remarkable.

The Last Mortal Bond is not a lighthearted adventure where the reader envies the heroes; at times I felt sorry for them. Yet faced with choices that are as cruel as the world they are living in, they persevere, and in doing so grace the reader with their strength. A phenomenon like the Chronicle of the Unhewn Throne comes along once in a lifetime, so I encourage lovers of high fantasy to read this series sooner rather than later. The Last Mortal Bond is a true masterpiece of imagination, invention, intrigue, and adventure.