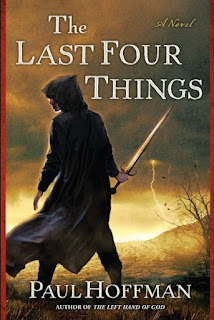 The epic story of Thomas Cale-introduced so memorably in The Left Hand of God--continues as the Redeemers use his prodigious gifts to further their sacred goal: the extinction of humankind and the end of the world.

Perhaps nowhere are the competing ideas of heaven and hell exhibited more clearly than in the dark and tormented soul of Thomas Cale. Betrayed by his beloved but still marked by a child's innocence, possessed of a remarkable aptitude for violence but capable of extreme tenderness, Cale will lead the Redeemers into a battle for nothing less than the fate of the human race. And though his broken heart foretells the bloody trail he will leave in pursuit of a personal peace he can never achieve, a glimmer of hope remains. The question even Cale can't answer: When it comes time to decide the fate of the world, to ensure the extermination of humankind or spare it, what will he choose? To express God's will on the edge of his sword, or to forgive his fellow man-and himself?

The Last Four Things picks up right after the first book and immediately starts going in a completely different direction than I thought it was heading. This is always enjoyable in a middle book, which can, if written improperly, feel like an extra long chapter to the first book or a story that drags on without anything really happening to the characters.

Paul Hoffman's skill at writing descriptive environments is as strong as ever. The world continues to baffle me. I've decided that it's an alternate Earth where the middle ages went on far longer than ours. I personally don't like alternate Earth settings, so I am a little disappointed, but for those of you who do like them, I think you'll enjoy this one. The world building itself continues to develop and we get a better understanding of the different religious sects as well as the different countries at play in the immediate area.

Hoffman develops his characters more in the second book, especially some of the minor characters from the first book. It's also nice to see this in a second book, instead of continuing to give the majority of the page to the Protagonist. For those of you like me who are fans of Thomas Cale, do not fear, he is not ignored in his own development. I really enjoyed learning more about some the minor characters and their motivations.

The Last Four Things is a great middle book in a series. It takes the story in a completely different direction than I thought it would go and sets things up for a satisfying ending. It's still a darkly themed book as it deals with children soldiers and religious wars. There is violence, language and sexual situations. I would recommend it to adults only.