Please welcome Johnny Shaw to The Qwillery to discuss writing and Floodgate which was published on February 16th by Thomas & Mercer. 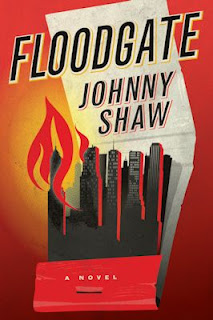 Johnny Shaw: I started writing in college, first as a screenwriter and playwright. I had already been working on films and plays, so the writing was an extension of that. I continued that as my job out of college. I really loved working collaboratively.

It wasn’t until almost 20 years later that I finally sat down to write something that was just mine. That was my first novel DOVE SEASON.

JS:  I’m a pantser all the way. Which is funny, because when I write a screenplay, I outline for weeks before I write a single word. I actually spend more time with the outline than the first draft. But I decided that I wanted the process of writing a novel to be different from that. To be looser and allow for more discovery along the way. So I make it up as I go along.

The challenge for me is that I feel like I’m learning in public a little. While I had experience writing for film and stage, the demands of the prose are limited. I hadn’t written a short story since junior high school when I sat down to write my first novel. I still do tons of drafts to try to get it right. It takes me a long time.

JS:  Movies inform my work as much, if not more than books. For FLOODGATE, my influences ranged from 1980s action movies to the comic books of my youth. 1930s pulps and gangster movies, too.

I’ve said it before, but the movies GUNGA DIN and RAISING ARIZONA are the models to which I aspire in my work. From the pacing to the sheer pleasure at the scene level to the dialogue and overall zaniness, I really see the influence when I sit back and look at my writing. Those are both movies that I watch a couple times a year. Not only do I enjoy the hell out of them, I feel like I keep learning from them.

JS:  FLOODGATE is what would happen if John Dos Passos had written the movie novelization for BIG TROUBLE IN LITTLE CHINA.

TQ:  Tell us something about Floodgate that is not found in the book description.

JS:  Because the big conspiracy is revealed later in the book, it’s only hinted at in the description. I think it’s more fun to let the reader experience the revelation.

Unfortunately, what happens is that the description of the book becomes the equivalent of describing THE WIZARD OF OZ by only describing the scenes in Kansas. Trust me, it gets bananas.

TQ:  What inspired you to write Floodgate?

JS:  I had been working on a book called NO ACCOUNTS. Another desert novel that I was going to play a little more straight. I got a fifth of the way into the writing of the first draft, and I just couldn’t get into it. I dreaded going and writing. It wasn’t like I was stuck. I just wasn’t in the mood for the story I was writing. I realized that I needed to get out of the desert.

I’m not a guy that has to be inspired. I write every day. I find a way to get it done. But it had become tortuous, and inefficient. It’s hard to get stuff done when you’re the main resistance.
The concept for FLOODGATE had been floating in my head, since I had abandoned it as a comic book project that I had developed with author Bart Lessard a dozen years earlier.

Mostly it sounded like a fun to pull me out of my doldrums. I sat down and wrote ten pages, just a scene of Andy Destra walking down a street (which ended up appearing later in the story). That’s all I needed. I was having fun again and I feel like that fun is reflected on the page.

JS:  I’ll start with the second question first. Andy Destra, the hero of the story, was the hardest character to write. Mostly because I didn’t want him to be the typical hero, yet I wanted him to be recognizable. He was an ex-cop, thrown off the force and disgraced. That sends him into the territory of trying to uncover a conspiracy that he’s convinced exists. In the early drafts, he was borderline insane, which I thought was interesting but too much. Once I scaled it back, I could make him slightly paranoid, but at the same time gullible. He wants to believe so much that he doesn’t always questions the obviously dubious.

The easiest character to write was Kate Girard, a mysterious woman that Andy meets that sets him on the path that exposes the conspiracy. I wanted to create a sexy woman in her sixties. A woman with strength and poise that had that femme fatale vibe. All I had to do was picture Lauren Bacall and her dialogue just appeared.

TQ:  Which question about Floodgate do you wish someone would ask? Ask it and answer it!

JS:  Why did you decide to write epigraphs before each chapter?

That’s a great question, Johnny. The main reason is that I love writing fake quotes. I did it for the first feature film that I produced and it’s a kick to not just come up with the quote, but the source of the quote.

But beyond my own amusement, I added them to help cement the idea of Auction City as a real place. By quoting different people from different eras in the city’s history, I felt like it gave a richer sense of the history. Parts of the city’s history that were only being hinted at, but not fully revealed.

JS:  I’m currently writing the third Jimmy Veeder Fiasco (the follow-up to DOVE SEASON and PLASTER CITY), which should be published in the first half of next year. It’s tentatively titled ALAMO RIVER and is set in both the Imperial Valley and Mexico.

JS:  Thanks so much for having me. 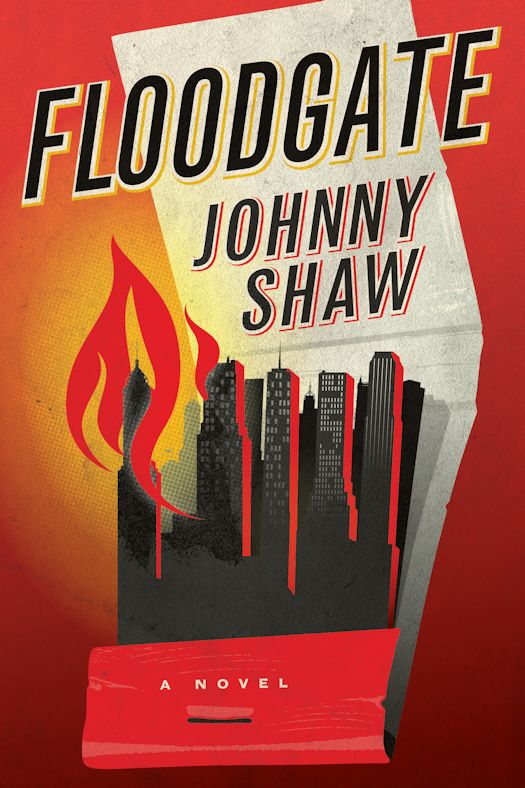 Andy Destra is a mostly honest cop in the most notoriously corrupt and crime-ridden city in America: Auction City. After discovering explosive information that reveals corruption within the highest levels of the police department, Andy is kicked off the force, framed, and disgraced, left to wage a lonely one-man crusade against conspiracies he can’t prove.

Andy’s investigation plunges him into a blackly comic maelstrom of one-armed gang members, slick pickpockets, criminal syndicates, hired mercenaries, escaped convicts, sewer dwellers, and one sinister ice cream truck. At the same time, he must contend with a mystery closer to home: the true identity of his parents, his most unshakeable obsession. Understanding their past may be the key to Auction City’s future as it teeters on the brink of chaos.

If Andy can’t solve this case, the Floodgate will fail…and his city will burn.

His short fiction has appeared in Thuglit, Crime Factory, Shotgun Honey, Plots with Guns, and various anthologies. He was the creator and editor of the hard-boiled fiction magazine Blood and Tacos. He lives in Portland, Oregon. 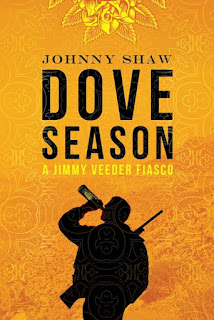 Twelve years have passed since Jimmy Veeder set foot in the Imperial Valley of southern California. The only person that could bring him back is his father, Jack, who is dying of cancer. Jimmy is prepared to spend Jack’s final days joking and reminiscing, but the old man has other plans. He needs Jimmy to cross the border into Mexico and find a prostitute named Yolanda. It’s a strange final request to be sure, but Jimmy’s not one to argue with a dying man. With his childhood buddy Bobby Maves in tow, he heads south, looking for Yolanda among the seedy bars and neighborhoods along the Calexico/Mexicali border. Their search leads them to Tomás Morales, a rising star in the Mexican underworld. While dangerous to most, his childhood friendship with Jimmy brings out his loyalty and spurs him to help. But just when Jimmy thinks his quest has ended, an unexpected murder sucks him further into the violence and danger of Mexicali. In his fight for survival and search for truth, what he uncovers calls into question everything he thought he knew about his father—and will determine just what kind of man he himself truly is. 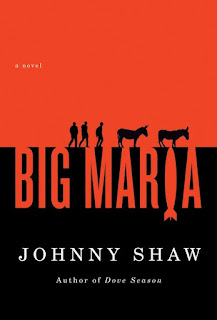 There’s gold in them thar hills—or more precisely, in Arizona’s Chocolate Mountains, where one hundred years ago a miner stashed a king’s ransom of the stuff. But times have changed. The world has changed. And now the Chocolate Mountains are the home of the largest military artillery range in the world.

Harry’s living on disability and getting liquored up and beaten down. Frank’s a feisty old-timer battling cancer and a domineering daughter. And Ricky’s a good kid in a bad spot, doing everything for family. Together they’re staking what little they have left on a dangerous quest to the Big Maria Mine—and the gold that can offer them a new beginning.

Unfortunately a meth-dealing biker wants a piece, a trigger-happy AWOL soldier wants to play chicken in a live minefield, two stubborn burros want to go home, a starving mountain lion wants his dinner, and the US Army wants to rain on our heroes’ parade with real bombs.

When you’re all out of crazy ideas, you’ve got to try the stupid ones.

Imagine Chuck Palahniuk and Don Winslow’s love child – and that would be ribald author Johnny Shaw. His novel Big Maria is a unfiltered, wild romp in which three men get one chance to find a lost gold mine; the only problem is the Big Maria Mine is right in the middle of a US Army artillery range. 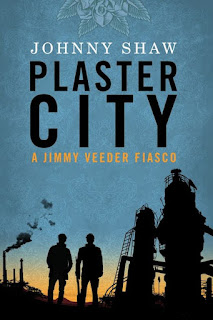 Jimmy Veeder and Bobby Maves are back at it, two years after the events of Dove Season—they’re not exactly the luckiest guys in the Imperial Valley, but, hey, they win more fights than they lose.

Settled on his own farmland and living like a true family man after years of irresponsible fun, Jimmy’s got a straight life cut out for him. But he’s knocking years off that life thanks to fun-yet-dangerous Bobby’s booze-addled antics—especially now that Bobby is single, volatile, profane as ever, and bored as hell.

When Bobby’s teenage daughter goes missing, he and Jimmy take off on a misadventure that starts out as merely unfortunate and escalates to downright calamitous. Bobby won’t hesitate to kick a hornets’ nest to get the girl to safety, but when the rescue mission goes riotously sideways, the duo’s grit—and loyalty to each other—is put to the test.