Please welcome Michael Boatman to The Qwillery. Who Wants to be the Prince of Darkness? was published by Angry Robot Books on March 1st. 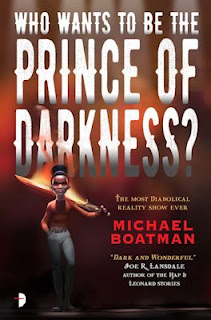 Michael:  Thanks for welcoming me. Typically I’ve found that when formulating a book, I tend to come up with a first scene, an opening moment that hopefully propels the narrative forward. Before I wrote Who Wants to be The Prince of Darkness I worked purely through inspiration. Usually some theme that’s been kicking around in my head initiates the writing process and I just sit down and start writing, moving forward by asking myself, “And then what happened?” But this book was different. It required plotting at a level I’d never attempted before. Because I had already created the world in which P.O.D. takes place, I found it incredibly difficult to stay true to the rules depicted in Last God Standing. Prince of Darkness had to address the fallout from Yahweh and Lucifer’s battle with Gabriel, only now I was telling that story from the now mortal Lucifer’s perspective. That left me with a huge dilemma: Lucifer is mortal, retired and essentially powerless. He’s been relegated to the sidelines, observing a resurgent Gabriel and his plot to create Hell on Earth, so whose story was it? That necessitated the creation of a new protagonist, someone close enough to Lucifer to include him in the adventure, while carving out his own new and different perspective. Enter…Manray Mothershed.

TQ:  Describe Who Wants to be The Prince of Darkness?

Michael:  The fallen angel Gabriel is remaking Hell into a global superpower. Still smarting from his humiliation at the hands of the retired Lucifer, Gabriel plots to bring Hell to Earth, and embarks upon a mad plan to steal innocent mortal souls and replace them with demons. And what better way to raise Hell than to use humanity’s greatest weapon against it: Reality T.V. Now demons are running rampant across the globe, consuming, living the American Dream while Hell is fills up with the wrongfully damned. But who on Earth is audacious enough to defend humanity and rescue the stolen mortal souls? Who possesses the nerve, the insight and the sheer arrogance to challenge Gabriel and his upwardly mobile forces of darkness? Manray Mothershed…the world’s hottest self-help guru. That’s who.

TQ:  Tell us something about Who Wants to be The Prince of Darkness? that is not found in the book description.

Michael:  Who Wants to be the Prince of Darkness was the most difficult story I’ve ever written. Apart from the struggle mentioned above, there was also the challenge of figuring out how to tell the story. I struggled mightily with perspective and characters. I struggled with the book’s tone. I knew that, like Last God Standing, it was a comedy, but little else beyond that. I tossed out so many false starts, different protagonists, while dealing with questions about timing. How long after the events depicted in LGS do the events in POD take place? Whose story is this? What is this book really about? Why should anybody care about what happens in Hell? But the biggest hurdle for me was figuring out how to make a character who is supposedly devoted to Evil…likable. How do you relate to such a character’s motivations? After numerous drafts and a billion tears, I realized that I needed to find a character readers can relate to. Manray Mothershed represents a popular meme in today’s culture; that of a man who is constantly striving to understand and improve himself. Manray is constantly asking the big questions: “Who am I…really?” “What’s it all about?” He’s at the top of the self-help game. A rich, charismatic celebrity, he’s figured it all out. Of course, that’s when his entire life explodes. By struggling to stop Gabriel, Manray also learns the devastating answers to those questions.

TQ:  What inspired you to write Who Wants To Be The Prince of Darkness? What appeals to you about humorous Contemporary Fantasy?

Michael:  This book arose from the original themes I explored in Last God Standing, namely that humanity has evolved beyond its need for gods and supernatural agents. Science and common sense have taken the roles once filled by deities and devils. But dramatizing that evolution forces a necessary question: If humanity’s gods and devils are out of business…what do they do to keep themselves busy?

Michael:  They both share the idea that all of humanity’s gods and devils are real people. That, rather than one religion “winning” the battle for dominance…every religion was right. But all those deities are fighting amongst themselves to remain relevant. The books both explore what it might look like if all these supernatural skyfathers and dark lords were real but violently upset about their current state of cultural irrelevance. I love fantasy and horror and comedy, so these books were a natural blend of the literary genres I enjoy the most.

TQ:  In Who Wants to be The Prince of Darkness? who was the easiest character to write and why? The hardest and why?

Michael:  For some reason Asmodeus, the Lord of Lust was the easiest character to write. He’s a giant, demonic minotaur who leads Lucifer’s cadre of most trusted Lieutenants. Asmodeus helps Manray throughout the story, acting as a kind of dark Gandalf, advising the heroes just enough to get them into deeper and worse trouble. He speaks frequently and at great length, and only in alliterative phrases. He also constantly references his genitals. I loved writing him. The hardest character to write was actually Manray. I struggled for nearly two years trying to find his voice. But a timely bit of advice from my editor, Phil Jourdan, really unlocked Manray, and thus the whole story. He pointed out that Manray had issues with his emotionally abusive father; a world famous televangelist who falls from grace in the worst possible way. This book was largely about absent fathers. That was something I instantly understood, but had somehow overlooked in earlier drafts. Once that clicked, Manray came to life.


TQ:  Which question about Who Wants to be The Prince of Darkness? do you wish someone would ask? Ask it and answer it!

Michael:  I wish people would ask me, “So if Lucifer and Hades and Kali the Hindu goddess of destruction are all real (or unreal)…are you saying that God and Zeus and Changing Woman are equally real? Or unreal?” My answer to them would be a resounding… “YES!” (I love watching fundamentalists squirm over the implications of that kind of reasoning.)

Michael:  Currently I’m kicking around a bunch of ideas. On the darker side I’m mulling an idea that retells the Superman story from the point of view of an alien who lands in a tobacco field in rural Georgia in the middle of a lynching. On the lighter side, I’ve been thinking about a modern vampire comedy that deals with class warfare in smalltown America. I’m really interested in artificial intelligence and post-human stories, so I’ve got a lot of ideas to play around with. 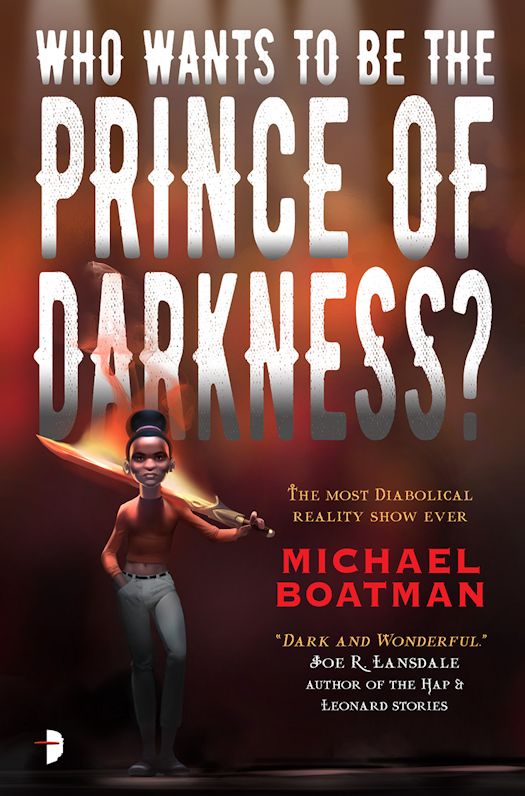 Lucifer is enjoying his retirement in an obscure corner of Limbo when he learns of a plot by Gabriel, the current ruler of Hell, to use humanity’s greatest weapon against it – Television!

Cue the hottest reality game-show ever conceived: Who Wants To Be The Prince Of Darkness? Gabriel orchestrates an “Infernal takeover” of Earth by stealing unwitting mortal souls and sending them to a mostly empty Hell, hoping to reinvigorate the Infernal Realm.

Now Lucifer must find a living champion to seize control of Hell and free millions of stolen mortal souls before the theft becomes permanent. But who would ever want to be Hell’s champion?

File Under: Fantasy [ Down Among The Dead Men | Fifteen Minutes For Eternity | Damned If You Do | The Morningstar ] When God decides to quit and join the human race to see what all the fuss is about, all Hell breaks loose.

Sensing his abdication, the other defunct gods of Earth’s vanquished pantheons want a piece of the action He abandoned.

Meanwhile, the newly-humanised deity must discover the whereabouts and intentions of the similarly reincarnated Lucifer, and block the ascension of a murderous new God.

How is he ever going to make it as a stand-up comedian with all of this going on..?

Michael Boatman spends his days and nights pretending to be other people. For a living.

After many years in his chosen profession he’s decided to chuck it all and seek his fortune as a writer. (Just kidding. He secretly dreams of changing the world as a talkative mime.)

Labels: Angry Robot Books, Interview, Michael Boatman, Who Wants to be the Prince of Darkness
Email ThisBlogThis!Share to TwitterShare to FacebookShare to Pinterest