Guest Blog by Kristi Abbott, author of Kernel of Truth


Please welcome Kristi Abbott to the The Qwillery. Kernel of Truth, the first book in the Popcorn Shop Mysteries, was published on March 1st by Berkley. 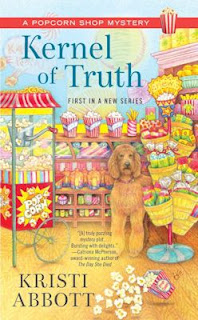 When my editor at Berkley first talked to me about writing the Popcorn Shop Mystery series, I was thrilled. I developed a thing for Garrett’s Caramel Cashew Popcorn when I lived in Chicago about a bazillion years ago. That stuff was like crack. One taste and I could not stop. Writing about a gourmet popcorn shop felt like a totally natural fit. Besides, who doesn’t like popcorn?

Some books are just easier to write than others. They flow easier. The words bring you more joy. The plot naturally evolves in a way that’s both inevitable and surprising. It’s kind of like having an easy baby. You’re never sure what special alchemy occurred to have a book that is a joy to sit down to every day any more than you really know what made that kid sleep through the night at six months. Kernel of Truth was one of those good-sleeping babies.

So far so great. Delicious popcorn. A book that’s flowing from my fingers into my laptop via my keyboard (an external one since I sort of accidentally poured ice water on my computer, but that’s another story). My editor sent the back cover copy. It was, in a word, adorable. Things were bursting. Problems were being resolved in a jiffy. Suspects were popping up. And recipes were included!

I wrote to my editor telling her how much I loved the copy and asking who worked up the recipes. She wrote back that she was pretty sure we’d talked about that way back when we were discussing the contract and I was supposed to be coming up with recipes. Once she said that, it did ring a bell. Thanks tons, middle-aged brain.

Cue panic mode. In the book, Rebecca had developed all kinds of special popcorn products like popcorn breakfast bars and popcorn fudge. Everyone loves them. Now I had to make them a reality. Really?

To say my first attempts were less than stellar is a bit of an understatement. My breakfast bars were more oozy breakfast lumps. The popcorn fudge wasn’t bad. I mean, how far wrong can you go with sweet and salty together? Not far in my book or in my life. Still, the chocolate was a little too stiff and the popcorn got a tiny bit soggy.

Enter my good friend and amazing author, the lovely Spring Warren who is not only a good cook, but understands the science of how food works. There was a bad moment when she asked me what I was using to hold the breakfast bars together and nearly choked when I told her marshmallow crème. Apparently, marshmallow crème is not considered to be a healthy part of a balanced breakfast. Who knew?

Spring, being the fabulous friend that she is, spent about four hours in my kitchen one afternoon and by the end of it, I had the recipes for Kernel of Truth. They were edible and replicable. I even shipped some off to my kids in care packages. Of course, twenty-year-old boys will eat pretty much anything, but they were still well-received.

I have at least two more popcorn books to write. That means I need somewhere between six and ten new recipes. Anybody have any favorite popcorn recipes they want to share? You’ll totally get a shout out in the acknowledgments of the next book if I use them! 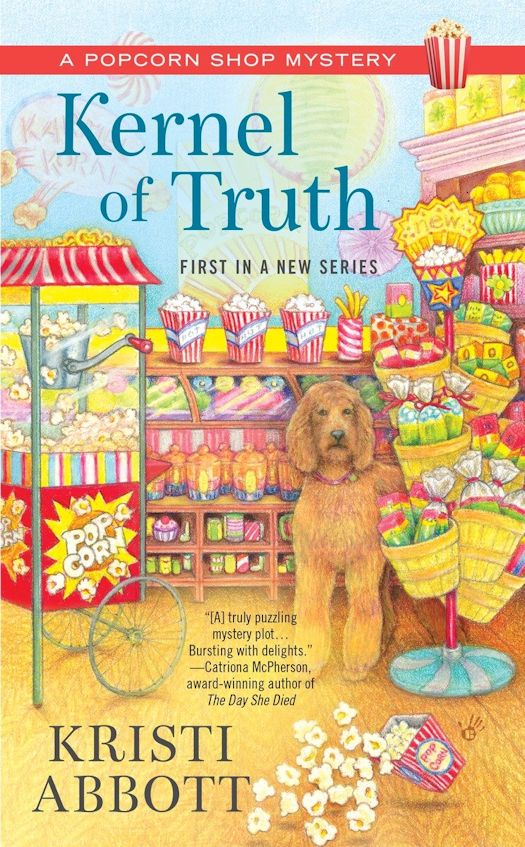 Opening a gourmet popcorn shop was never on Rebecca Anderson’s bucket list. But after a failed marriage to a celebrity chef, she’s ready for her life to open up and expand. She has returned to her hometown of Grand Lake, Ohio, with her popcorn-loving poodle Sprocket to start a new business—naturally called POPS. As a delicious bonus, Cordelia “Coco” Bittles, a close family friend who has always been like a grandmother to Rebecca, owns the chocolate shop next door, and the two are thinking of combining their businesses.

But when Coco’s niece, Alice, discovers her on the floor of her chocolate shop, those dreams go up in smoke. The local sheriff thinks Coco was the victim of a robbery gone wrong, but Rebecca isn’t so sure. As suspects start popping up all over, Rebecca is determined to turn up the heat and bring the killer to justice in a jiffy! 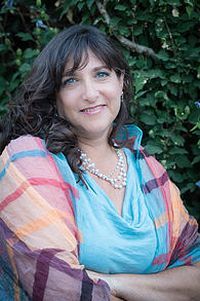 Kernel of Truth is Kristi's first book with Berkley Prime Crime. She has been obsessed with popcorn since first tasting the caramel cashew popcorn at Garrett’s in Chicago. If you’ve never had it, you might want to hop on a plane and go now. Seriously, it’s that good.

Kristi lives in northern California, although she was born in Ohio like the heroine of Kernel of Truth. She loves snack food, crocheting, her kids, and her man, not necessarily in that order.

Kristi also writes as both Eileen Rendahl and Eileen Carr. Click here to learn more about her other books.

What:  One entrant will win a Mass Market Paperback copy of Kernel of Truth by Kristi Abbott from The Qwillery. US ONLY

Who and When:  The contest is open to all humans on the planet earth with a US mailing address. Contest ends at 11:59 PM US Eastern Time on March 30, 2016. Void where prohibited by law. No purchase necessary. You must be 18 years old or older to enter.