Please welcome Linda Reilly to The Qwillery. Out of the Dying Pan, the 2nd novel in the Deep Fried Mysteries, was published on March 1st by Berkley. 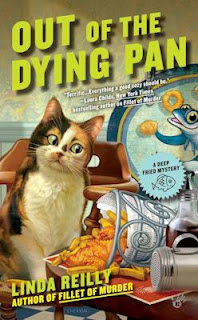 One of the things I love to do is to poke around at a crafts fair. Whether it’s to snag a hand-made gift for the holiday, buy a whimsical pin, or pick up an herb packet from which to make a tasty dip, I find that spending an hour or so at a local crafts event really sparks my creative side.

Out of the Dying Pan, the second book in the Deep Fried mystery series, gave me the perfect opportunity to feature a crafts fair of sorts. Talia Marby, the newly-minted owner of Fry Me a Sliver, has volunteered to sell squares of deep-fried marble cake drizzled with raspberry sauce at the Town of Wrensdale’s annual fundraiser. Armed with a portable deep fryer, she sets up shop in a corner of the community center’s gymnasium, right next to a vintage accessories booth. While the delectable scent of Talia’s deep-fried cakes fills the air, unfriendly vibes drift over from the adjoining booth. Talia can’t imagine why Ria, the woman selling the vintage items, keeps throwing hateful looks at her. Talia doesn’t even know the woman! Then Talia spies a familiar scarf on one of Ria’s displays—it was the very scarf Talia had knitted for her nana eons ago. But how did Ria get her nana’s scarf? Talia tries to buy it, but is soundly snubbed. When Talia later stumbles upon Ria’s body, the scarf knotted around Ria’s slender neck, she catapults to the top of the suspect list. She later learns that the scarf was stained with telltale raspberry sauce . . .

I’m happy to report that I’ve never tripped over a body at a crafts fair. This past December I attended a huge crafts event that had all my favorites – glassware, pottery, baked goods (can’t go without those), and yes . . . knitted scarves. At one booth, a woman was selling gorgeous greeting cards. One set of cards in particular depicted forest animals lining up to visit an adorable Santa figure. It gave me an idea. I purchased the cards, which were blank inside. On my computer, I typed my own holiday greeting in red ink and printed out a bunch of them. Using a tiny paper cutter, I trimmed my holiday message to fit inside each card. A swipe across the top with a glue stick ensured that it would stay in place. What I loved about creating my own holiday message was that I could change the greeting, or even the font, to suit the recipient. Not only was this a fun project, but it gave me a way to personalize each of my cards.

So tell me, are you crafty? Have you ever set up a table at a crafts fair? I love hearing about readers’ creative pursuits! 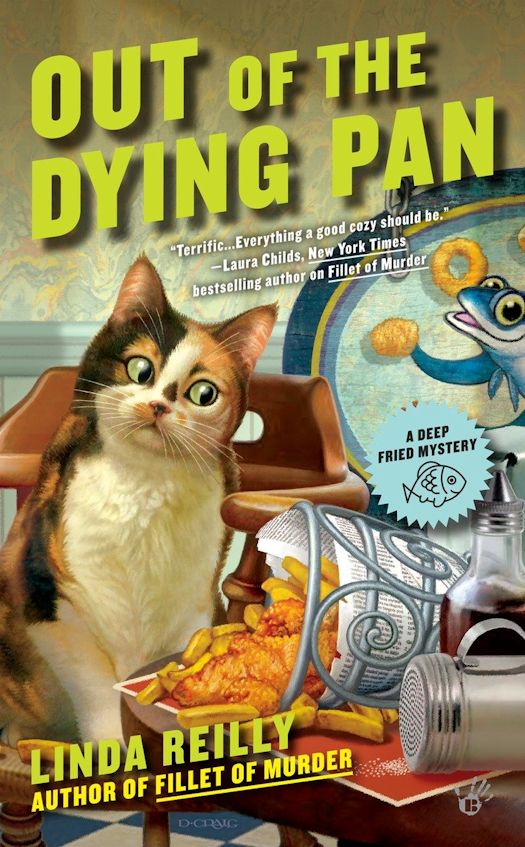 Revenge is set to sizzle in the tasty new Deep Fried Mystery from the author of Fillet of Murder.

For Talia Marby, the sweet smell of success is a lot like the pungent aroma of fried fish and vinegar. Her new business, Fry Me a Sliver, is rapidly expanding beyond fish and chips to become one of the best eateries in the Berkshires. But the nasty owner of a neighboring boutique is making a stink, baiting Talia in a very public fight at a community center fundraiser and nursing an inexplicable grudge.

When the boutique owner is found strangled with Talia’s scarf knotted around her neck, our favorite fish fryer finds herself in hot oil. Needing to clear her name, and fast, Talia’s investigation soon yields some shocking surprises as well as a sizzling suspicion: someone had good reason to want the victim dead—and it’s frying Talia’s nerves…

The second installment of Linda Reilly’s Deep Fried Mystery Series is entitled Out of the Dying Pan and picks up soon after the debut novel, Fillet of Murder, left off. Talia Marby is the new proprietor of Fry Me a Sliver, a small town comfort food eatery specializing in all things deep fried, nestled in the Berkshire Mountains of Massachusetts. Things are going well for Talia, with the usual bumps of starting a new business, when she again finds herself unwillingly involved in another murder mystery.

Talia never imagined herself being a restaurateur, but is enthusiastic about the turn her life has taken and is pouring all of her passion into taking her beloved fish and chips restaurant into a new, more modern direction. She is lucky to have the help of some wonderful friends, family and employees.

Lucas and Martha are recent hires at Fry Me a Sliver. Lucas is a nineteen year old student who is sweet, eager, and a bit accident prone and Martha is a much older but newer resident to the Berkshires who has an unclear past and a very prickly manner. Both prove to be very helpful to Talia in the restaurant and in the mystery, Talia’s best friend since childhood is Rachel, who has a smaller role in this novel, but is always there for Talia when she’s needed with advice and a shoulder to cry on. Ryan Collins is Talia’s relatively new boyfriend. Ryan is sweet and supportive and is willing to take things slow with their relationship, which is something that Talia needs. Talia also has the unwavering encouragement of her parents and sweetheart aunts, who all make brief appearances.

Various characters turn up during the course of the book who are tied closely to the murder mystery. Oriana “Ria” Butterforth, is a new shop owner who is demanding, snobby and despises Talia on sight, for reasons that are revealed later in the plot. Ria is also the ill-fated murder victim who Talia stumbles upon while participating in a fundraiser for the local community center.

Possible suspects for the murder include Andy Nash, Vivian Lavoie, Scott Pollard, Kelsey Dakoulas, and Will Claiborne. Andy is an awkward but seemingly harmless character who has an affection for Ria that is not reciprocated. Vivian is an older local crafter who has a habit of spreading gossip. Scott is a handsome and charming local contractor who Ria and Talia meet in his role as a helper to the vendors at the fundraiser. Kelsey is the much trod upon employee and former friend of Ria who holds an obvious grudge against Ria. Will is Ria’s boyfriend and also the landlord of all the shops in the Wrensdale Arcade, where both Ria and Talia’s businesses are located. Will seems heartbroken over Ria’s death, but it is obvious that his estranged wife is more than happy that her rival is out of the picture.

The plot of the story moves well and blends together perfectly with the backstory of Talia’s life, which is really one of the best parts of the novel. The author gives charm to her New England setting and brings the local residents to vivid life, making them likeable and understandable. The mystery flows logically and is nicely and a bit surprisingly tied up in the end, with enough twists and unexpected turns to keep the reader interested. The book is peppered with mouthwatering deep fried dish ideas, many of which appear in the recipe section at the end of the book and promise to be fun to cook. Out of the Dying Pan is a fun and fast read and will be enjoyable to any cozy mystery lover.

Linda Reilly is the author of the Deep Fried Mysteries, including Out of the Dying Pan and Fillet of Murder. She lives with her husband in southern New Hampshire and is a member of Sisters in Crime and its subchapter, the Guppies. When she’s not prowling the shelves of a bookstore or library in search of a cozy read, she can be found tapping away at the keyboard creating her own cozy adventure.

What:  One entrant will win a Mass Market Paperback copy of Out of the Dying Pan by Linda Reilly from the publisher. US ONLY

Who and When:  The contest is open to all humans on the planet earth with a US mailing address. Contest ends at 11:59 PM US Eastern Time on April 8, 2016. Void where prohibited by law. No purchase necessary. You must be 18 years old or older to enter. 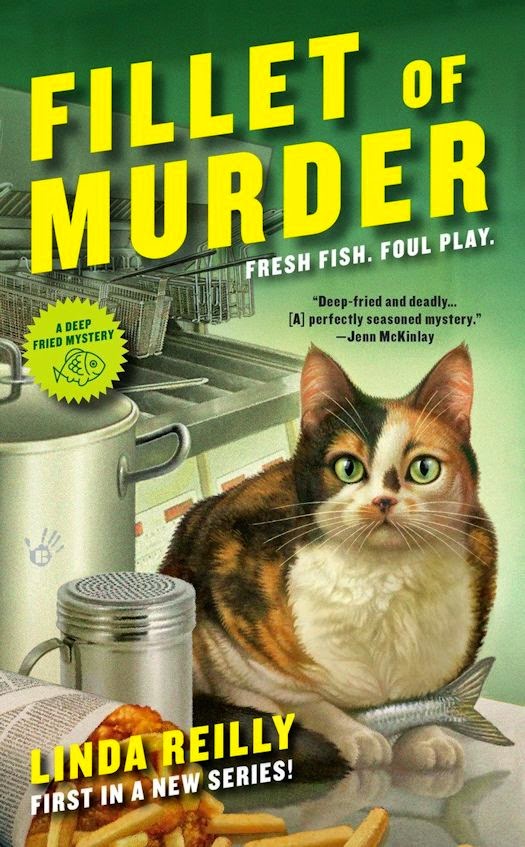 Sometimes in this life, you have to fish or cut bait. After walking away from a miserable job and an even worse boyfriend, Talia Marby has no regrets. She’s returned to her hometown and is happy to help her dear friend Bea Lambert by working at Lambert’s Fish & Chips, a cornerstone of a charming shopping plaza designed to resemble an old English village.

But not all the shop owners are charming. Phil Turnbull has been pestering Bea to sign a petition against a new store opening up, and his constant badgering is enough to make her want to boil him in oil. When Talia and Bea stumble upon Turnbull murdered in his shop, the police suspect Bea. Now it’s up to Talia to fish around for clues and hook the real killer before her friend has to trade serving food for serving time…


See Jennifer's Review here.
Posted by Qwill at 7:50 AM