Please welcome Penny Lively to The Qwillery. Penny is the owner of her family winery and main character in the Cypress Cove Mystery series. Her most recent adventure is found in Ripe for Murder by Carlene O'Neil. 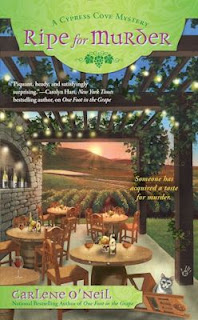 Penny Lively here, taking time out from ploughing on my California winery. Yes, I did say ploughing, because in its early stages wine is a field of grapes, just like any other crop. It’s freezing out today but the work needs to be done. These are the times you don’t talk about in the cozy tasting room, when I frequently hear from a visitor, “Oh, running a winery must be a wonderful way to live.” It can be, but today isn’t one of those days. The last of winter is holding out in early March and there’s a raw wind coming in off the Pacific. My hair is tucked into a ski cap. I’m wearing two sweaters, a fleece and the warmest coat I could find. Hardly highbrow, and yet that’s often one of the things that keeps people from really enjoying wine…the feeling that unless you really know what you’re talking about you should, well, be drinking beer.

I’m just going to come out and say it: Wine can be intimidating. I know it shouldn’t be, and as a winery owner I don’t want it to be, but it happens. Unfortunately, some people in the wine business foster that sense of mystique, and that’s a mistake. It keeps people from enjoying what they drink. Afraid of selecting the “wrong” wine for a meal, they will stick to the same two or three varietals they know, or decide they just don’t like wine.

Then there are some of the terms, and heaven forbid if you’re caught with a wine snob and don’t know what something means. For example, take the term terroir. In some areas of the world this is no laughing matter. Classifications of various grape growing regions in France are utterly strict and closely controlled. Very serious stuff. At least to some of the Châteaux in this area that have had the classifications of First Cru and Premier Cru for hundreds of years. Literally. Now, simply translated, terroir can refer to the terrain the grapes are grown in. It can also mean the slope, rainfall, drainage and how much sun the vines receive, along with a hundred other things, but honestly, do you really care? Of course not, and why should you? If you like something, drink it. Experiment with something new, like a Malbec. Smell it before you taste and see if you can recognize the fruits. Roll it around in your mouth. Is there a bite to it? That could be the oak. It might be smooth, and soft, something good with mild foods. First and foremost, remember that wine should be fun. Just ask the Romans and Greeks. They figured it out thousands of years ago. 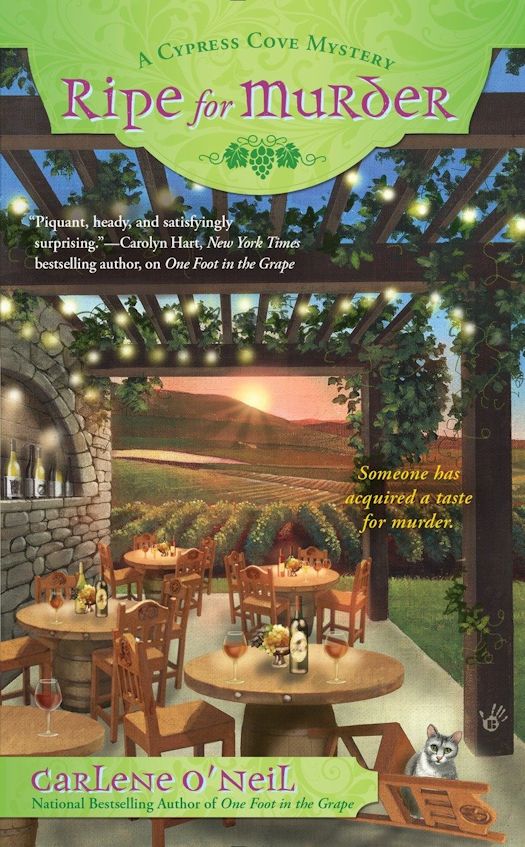 From the author of One Foot in the Grape—a new full-bodied Cypress Cove mystery that is certain to delight, even if one wine lover is about to expire…

Penny Lively loves running her family’s winery, but to keep business growing, she needs to find a way to attract more guests. When she’s approached to invest in a new train line through wine country, Penny and her intoxicating winery manager, Connor, hightail it to a lavish resort to hear the details. Unfortunately, her neighbor’s daughter, Chantal, is also there, swirling up trouble by flirting with the married investors—and with Connor too.

When one of the investors’ wives is murdered, Chantal, who was seen fighting with the woman, is the prime suspect. Chantal may be a sour grape, but she’s no killer. So Penny, who’s become a sleuthing connoisseur, starts sniffing out the real suspect—and discovers that her fellow potential investors have been savoring more than their share of deadly secrets…

Ripe for Murder is the second installment in Carlene O’Neil’s Cypress Cove Mystery Series. The series follows Penny Lively, a former photojournalist who is now the owner of her family’s small vineyard in Cypress Cove, California. This novel finds Penny and her Cypress Cove friends heading up to Monterey County, widely recognized as wine country, to explore the possibilities of investing in a new train line that could bring scores of customers to the Cypress Cove wineries. The quick working vacation is marred by murder, and Penny finds herself on the trail of a cunning killer, yet again.

Penny, who is curious and methodical by nature, is still new to the winery business and relies heavily on her winery manager, Connor, to help her make important decisions regarding the business. Connor is ruggedly handsome and a brilliant vintner, with obvious feelings for Penny, who does reciprocate his feelings, but is hesitant to act on them for fear that a failed personal relationship could endanger their professional one. Penny’s nearest neighbor and longtime winery owner is Antonia Martinelli. Antonia is a favorite of mine. She is much older and presents a poised but often caustic façade to the world, but underneath has deep regrets for many of her life’s decisions and is fiercely loyal to her friends and family. One of the people Antonia is protective of is her daughter Chantal. Chantal is nothing short of a petite bombshell, with stunning good looks and a head turning body. Penny and Chantal are of a similar age and have a history of animosity. Penny tolerates Chantal on the Monterey County trip for the sake of Antonia, but makes no secret that she dislikes Chantal’s man hungry ways, particularly where Connor is concerned. Unfortunately, Penny finds herself as Chantal’s champion when Chantal becomes the prime suspect in the railway murder.

The Cypress Cove crew meet a host of other investors and locals during the course of their trip, most of whom are also potential suspects in the murder. “Big” Dave Duport, a bombastic and wealthy car salesman is not interested in wine or trains, but is a potential investor at the urging of his younger new wife, Tara. Tara, who is a former Monterey County resident from the wrong side of the tracks, is loud and crass and wholly unlikeable, which might explain why she quickly becomes a murder victim. Tara’s murder takes place soon after a physical confrontation with Chantal, which also explains why Chantal is the main suspect. Big Dave’s reckless adult son, Vance, is along for the ride simply to protect his inheritance from his grasping new step-mother. The other investors that figure into the plot are Jim and Kim, a sweet married couple from Chicago. The pair are thinking of investing in the luxury rail line because of Jim’s obsession with trains. The representative from the rail line, Bill, is a nervous little guy who has a lot on the line with the train venture, and George, the butler at the resort where the investors are staying, proves to be a help to Penny in her investigation.

On the local side, we meet Barb, Seth, Olympio, and Chief Harding. Barb and Seth are a married couple who have a tumultuous history with the murder victim. Barb is a downtrodden waitress and Seth is the bullish bartender at Berninni Winery. Berninni winery is a successful local vineyard run by the elderly Olympio, a man from Antonia’s past who clearly has an interest in keeping Antonia in his life now that they has met again. Chief Lawrence Harding is the cranky local detective in charge of solving the murder. Chief Harding is fixated on Chantal as the murderer and is unimpressed with Penny’s attempts to clear her name.

The plot of the book moves quickly and realistically. The characters are well defined and all work well within the mystery. The only frustrating part of the novel is the relationship between Penny and Connor. Connor is portrayed as a near perfect man and Penny’s reluctance to act on her feelings for him sometimes becomes extremely vexing. Hopefully readers will see a romance blossom between these two characters in subsequent books in the series. Overall, Ripe for Murder is a solid and enjoyable addition to the Cypress Cove Mystery Series. 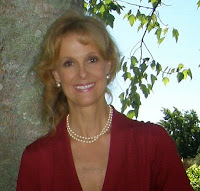 Carlene O’Neil grew up in the heart of Northern California Wine Country and is accredited by the Wine and Spirits Education Trust. A former television writer, she currently makes her home outside Los Angeles, where she can be found sailing in the Santa Monica Bay or doing research for her next novel.

Clearly, any novel set in wine country requires extensive research. One Foot in the Grape is her debut novel, coming out in spring 2015 from Berkley Prime Crime.

What:  One entrant will win a Mass Market Paperback copy of Ripe for Murder by Carlene O'Neil from the publisher. US ONLY

Who and When:  The contest is open to all humans on the planet earth with a US mailing address. Contest ends at 11:59 PM US Eastern Time on April 2, 2016. Void where prohibited by law. No purchase necessary. You must be 18 years old or older to enter.

*Giveaway rules and duration are subject to change.*
a Rafflecopter giveaway 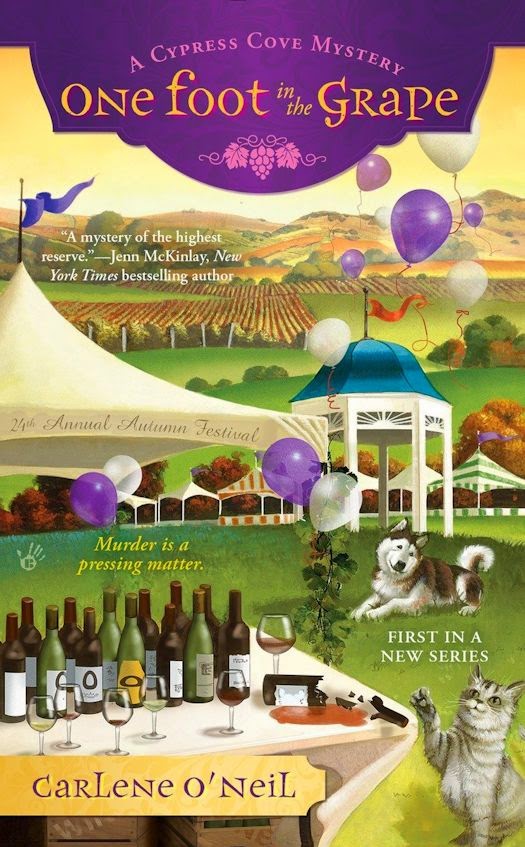 In California wine country, the town of Cypress Cove may seem peaceful. But someone’s about to pop their cork…

After losing her job as a photojournalist, Penny Lively is trying to get her life back in focus. Inheriting the family winery from her late aunt may be the fresh start she needs. Thankfully she’s got her niece Hayley and her handsome winery manager Connor to help. But the person in need of more urgent assistance is Antonia Martinelli, the owner of the neighboring winery, who has her own barrel full of problems. Someone’s spoiling her wine, and with the upcoming Autumn Festival, she needs Penny’s nose for clues to sniff out the culprit.

But Penny’s search for answers sours after the body of a staff member is found in a grape crusher. Since Hayley was the last to see him alive, she’s the prime suspect in the case. Now Penny must hurry to find the real killer before Hayley withers on the vine…

See Jennifer's Review here.
Posted by Qwill at 9:52 AM