PORTLAND, OR, 06/21/2018 — Image Comics is pleased to reveal a special, breathtaking wraparound cover for THE WEATHERMAN #2 by Jody LeHeup (SHIRTLESS BEAR-FIGHTER) and Nathan Fox (DMZ, HAUNT, Dark Reign: Zodiac). This limited cover will feature artwork by Fox and will hit select stores this July.

THE WEATHERMAN follows Nathan Bright—a man who had it all: an awesome girlfriend, a kickass dog, and a job as the number one weatherman on terraformed Mars. But when he’s accused of carrying out the worst terrorist attack in human history—an event that wiped out nearly the entire population of Earth—Nathan becomes the most wanted man alive and a target of a manhunt that spans the galaxy. But is Nathan truly responsible for such a horrific crime? And why can’t he remember? 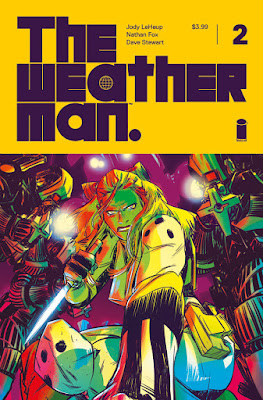 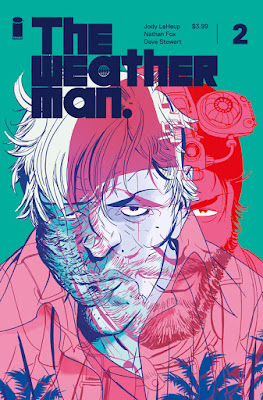 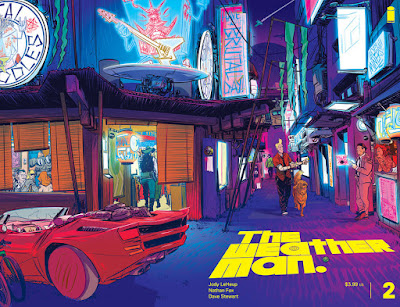 
ABOUT IMAGE COMICS
Image Comics is a comic book and graphic novel publisher founded in 1992 by a collective of bestselling artists. Image has since gone on to become one of the largest comics publishers in the United States. Image currently has five partners: Robert Kirkman, Erik Larsen, Todd McFarlane, Marc Silvestri, and Jim Valentino. It consists of five major houses: Todd McFarlane Productions, Top Cow Productions, Shadowline Comics, Skybound Entertainment, and Image Central. Image publishes comics and graphic novels in nearly every genre, sub-genre, and style imaginable. It offers science fiction, fantasy, romance, horror, crime fiction, historical fiction, humor and more by the finest artists and writers working in the medium today. For more information, visit www.imagecomics.com.
Posted by Qwill at 6:09 AM