“I can’t quite believe it’s been 15 years. This is an amazing box set and it’s something that I would be proud to have on my bookshelf…” said Adlard. “Here’s to the next anniversary!”

This deluxe boxset includes THE WALKING DEAD Compendiums 1, 2, and 3—each with exclusive, new covers—collecting the first 144 issues of the New York Times bestselling survival horror series from Kirkman and Charlie Adlard. It also includes an exclusive, expanded edition of the HERE’S NEGAN trade paperback, which now features the previously uncollected origins of Michonne, Tyrese, the Governor, and Morgan. This box promises to be the most complete collection of THE WALKING DEAD ever assembled and is a cannot-miss experience for the ultimate fan.

THE WALKING DEAD COMPENDIUM 15TH ANNIVERSARY BOX SET (Diamond Code APR188923), which will retail for $200, will be available on Wednesday, October 3rd and in bookstores on Tuesday, October 9th. The final order cutoff deadline for retailers is Monday, June 11th. 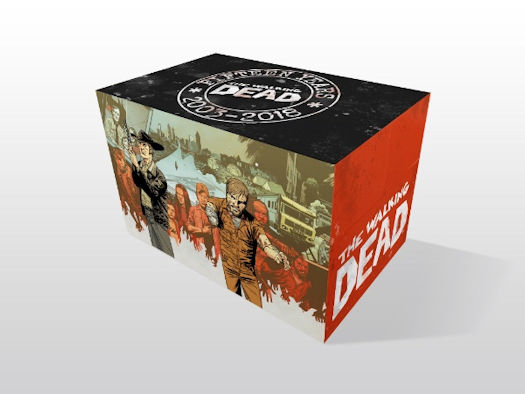 ABOUT IMAGE COMICS
Image Comics is a comic book and graphic novel publisher founded in 1992 by a collective of bestselling artists. Image has since gone on to become one of the largest comics publishers in the United States. Image currently has five partners: Robert Kirkman, Erik Larsen, Todd McFarlane, Marc Silvestri, and Jim Valentino. It consists of five major houses: Todd McFarlane Productions, Top Cow Productions, Shadowline Comics, Skybound Entertainment, and Image Central. Image publishes comics and graphic novels in nearly every genre, sub-genre, and style imaginable. It offers science fiction, fantasy, romance, horror, crime fiction, historical fiction, humor and more by the finest artists and writers working in the medium today. For more information, visit www.imagecomics.com.
ABOUT SKYBOUND ENTERTAINMENT
Founded in 2010, Skybound Entertainment is a multiplatform entertainment company specializing in television, comics, film, digital content, interactive, gaming, and merchandise. The company is led by The Walking Dead creator Robert Kirkman and his longtime producing and business partner David Alpert.
Posted by Qwill at 5:10 AM